The bell rang for the lunch period on Thursday, signifying the start of Senior Shirt Signing, a still fairly young tradition at Jesuit even though it began about 12 years ago. It was an autograph free-for-all as the Class of 2017 hurriedly made their way to the back of campus to get the John Hancocks of their classmates and even some of their teachers. No special talent is required, not even legible hand-writing. No prizes are offered to the Blue Jays who collect the most signatures. Usually, seniors can collect more than 100 signatures of their classmates. Sometimes the quantity doesn’t exactly equate with quality. It’s low key and low pressure, and seniors wasted no time heading over to S. Solomon Street adjacent to Will Clark Field. 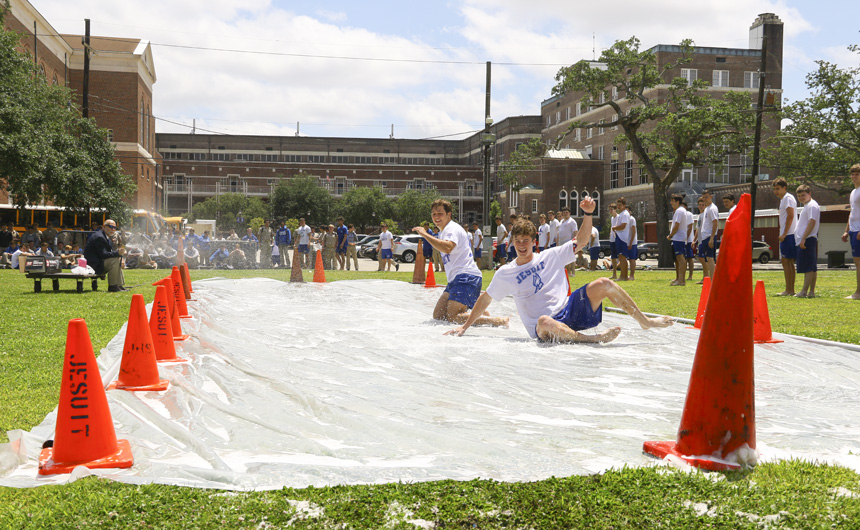 Seniors Noah Baquet and Max Bell perfect their form as they reach the landing zone of the slip ‘n slide.

Sometimes the simplest form of fun is the absolute best form of fun. Who would have thought that a few feet of plastic sheeting, orange traffic cones, and a bottle of dish soap could keep 290 seniors happily occupied for the better part of an hour?

On Wednesday, the Senior Week activity did just that as the Class of 2017 slipped and slid their way into a fun afternoon. Approaching the tarp in groups of two, many seniors tried to impress their classmates standing nearby with the most creative method of sliding 30 or so feet. Members of the swim team wore their swim caps, others simply tried to keep their standing balance for the full length of the plastic sheet.

Whatever the method, everyone had a great time as the countdown to the last full day of classes reaches one.

Senior week continued for the Class of 2017. They were treated to a hot jambalaya lunch as they watched the Intramural Sports program wrap up the senior cabbage ball finals on Tuesday, April 25, the second day of Senior Week. The championship game was played by Team Blavandal  and Team Sidewalk Slammers (the victors) on Will Clark Field. The jambalaya was cooked by Mr. Bill Poynot and served by members of the faculty. The annual rite of passage rewards the upperclassmen for their hard work and exemplary behavior throughout their final year as high school students. 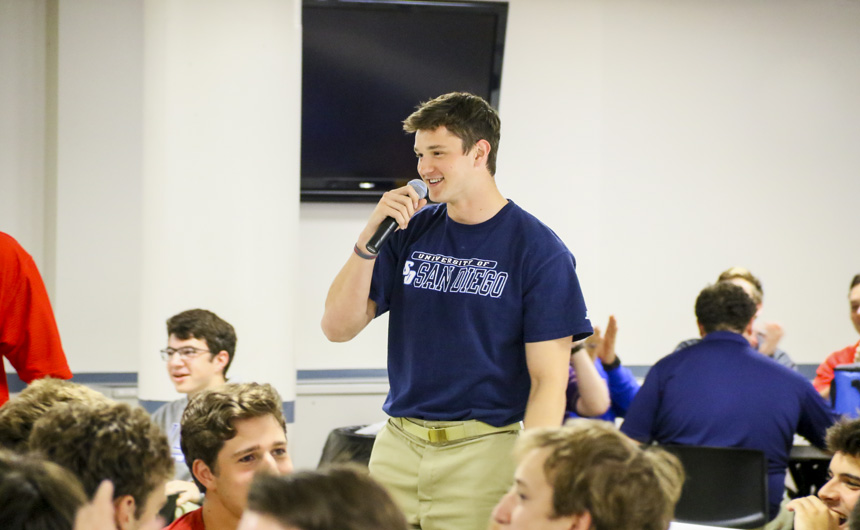 Blue Jays of the Class of 2017 were treated to a delicious lunch from restaurant Five Happiness on the first day of Senior Week, April 24 – 28.  The annual rite of passage rewards the upperclassmen for their hard work and exemplary behavior throughout their final year as high school students.

While seniors scarfed down Chinese takeout, a few classmates impersonated their favorite teachers before class president Jacob Marshall handed out some special awards to his classmates. Many seniors chose to swap out their khaki uniform shirt for a shirt from the college they’ll be attending in the fall.

The well-deserved senior celebration will continue with lunchtime activities each day this week (see the schedule below), concluding with Commencement Luncheon at which the graduating seniors are officially welcomed into the Alumni Association.

After being formally dismissed from their final Morning Assembly as Jesuit students, seniors make their way into the Auditorium to begin Senior Day activities. The main attraction is the Senior Showcase, a chance for Blue Jays to share their talents — and a few laughs — with their classmates.

Afterwards, seniors board several school buses and make their way downtown where the 290 members of the Class of 2017 will be officially welcomed into the Jesuit Alumni Association at the Commencement Luncheon. This year the luncheon will be held in the Bienville Club Lounge of the Mercedes-Benz Superdome.

Seniors and alumni guests will hear from this year’s speaker, the Honorable Marc Morial ’76. Morial is the former mayor of New Orleans and current president of the National Urban League. As mayor of New Orleans in the 1990s, Morial was successful in reducing violent crime, the unemployment rate, and the city’s poverty rate. In his tenure the Convention Center was expanded, the downtown casino and sports arena opened, and the Charlotte Hornets relocated to the city. During his tenure as president of the National Urban League, the 100 year-old civil rights organization has expanded to include an empowerment agenda to close the economic gaps between whites and blacks, as well as rich and poor Americans. In Jesuit’s 2012 celebration of the 50th anniversary of the school’s desegregation, Morial was an important advisor to the school and participant in the events.