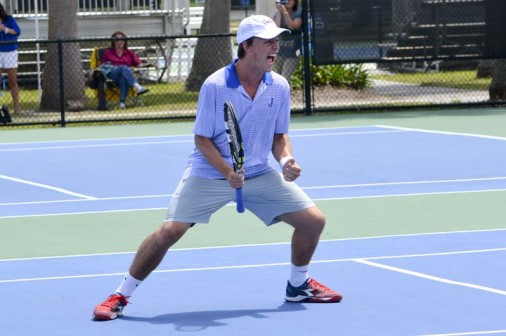 Jack Steib and Trey Hamlin provided all the punch Jesuit needed on an otherwise rough day at the LHSAA Allstate Sugar Bowl Regional Tennis Tournament . The senior tandem claimed the regional doubles title by defeating Brother Martin’s Line 2 doubles team of Corey Canzoneri and Christopher Russo in the semifinals and then following that up with a win in the finals against the Crusaders’ Line 1 team of Ben Chanes and Zachary Brubaker.

The two points Steib and Hamlin earned with those wins allowed Jesuit to tie Brother Martin in overall points with 16. Jesuit was awarded the regional team championship by virtue of the second tiebreaker in the LHSAA bylaws, namely having advanced four teams to semifinal action to Brother Martin’s three.

All three of Jesuit’s other semifinalists bowed out in that round. Freshman Jojo Sandoz, the top seed in the singles draw, had to withdraw early in the first set when he stepped on a tennis ball and sprained his ankle. Graham Buck, the second seed in singles, was then upset in three sets by eventual singles champion Ethan Bosch of Brother Martin.

In doubles, Jesuit’s Line 2 doubles team of Christian Lacoste and Andrew Ryan played some of their best tennis of the year, but it wasn’t quite good enough to beat Chanes and Brubaker.

Jesuit will send its entire eight-man regional line-up to the state tournament in Monroe on April 27 and 28 (Senior Leo Seoane and freshman James Henican, the Jays’ Line 3 doubles team, lost in quarterfinal action on Tuesday, but still qualified).