Jays Post Seven Runs in the Third to Cruise Past Crusaders 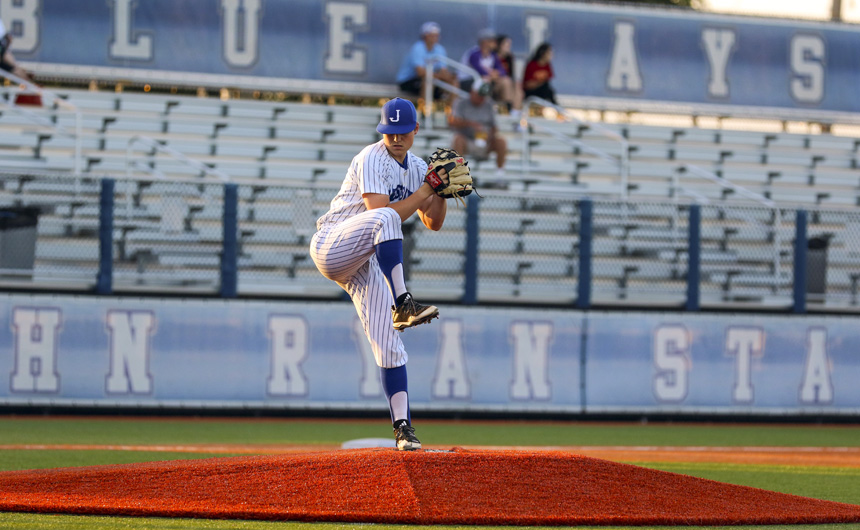 Davis Martin (1) gets the win for the Jays, pitching seven innings and striking out five.

After a heartbreak in the first meeting with Brother Martin at UNO, the Blue Jays took advantage of their opponents’ pitching trouble in the third inning to cruise past the Crusaders, 7-1.

Senior left-hander Davis Martin (1) took to the mound for Jesuit and pitched a complete seven innings. In an incredible performance, Martin allowed only one run on seven hits for the Crusaders. He struck out five batters in the process.

The electrifying third inning for the Blue Jays began with a single to center field by senior Bryce Musso (9). Senior Nick Ray (12) then crushed a triple to left field, bringing Musso all the way around from first. Junior Michael Torry (21) then hit a rocket in the gap at second to bring Ray home.

The bats stayed alive for the Jays as senior Stephen Sepcich (27) advanced Torry to second on a single to right. The second triple of the inning was hit by senior Marc Theberge (3), clearing the bases and scoring two. Theberge then scored on a sacrifice fly from senior Sam Ovella (18), and Brother Martin knew it was time for a pitching change.

The first out of the inning came when Marshall Lee (10) walked to first, stole second, and was picked off on his attempt at third. Junior Alex Watermeier (20) reached on a walk, and his pinch runner, Sean Seghers (4), stole second on a fumbled pitch.

Senior Hunt Conroy (5) then hit a high, choppy grounder to second, and the height of the bounce made the second baseman rush the throw to first for an error. Seghers came home, and Conroy moved to second. Things just couldn’t seem to come together for the Crusaders to end the inning.

After Bryce Musso drilled a single to center, which was again bobbled to allow Conroy to score, another pitching change was imminent. The Crusader brought on freshman Jacob Cohen, who escaped the inning on an obstruction call as Musso was making an attempt to steal second.

Cohen finished the game strong for the Crusaders, but not before Jesuit was able to capitalize on the third inning mistakes for seven runs.

Davis Martin continued to pitch flawlessly at the mound, and the Jesuit defense kept a tight grip on the reins.

The win for the Jays improved their district record to 7-5, currently ranked 5th in the state leading to the playoffs behind Archbishop Rummel. A win for the Jays on Saturday in a non-district contest against St. Michael of Baton Rouge could improve their chances to jump a spot before beginning playoff play next week.

The game against Brother Martin will be replayed on WHNO TV 20 on Saturday, April 22 at 11:00 AM. 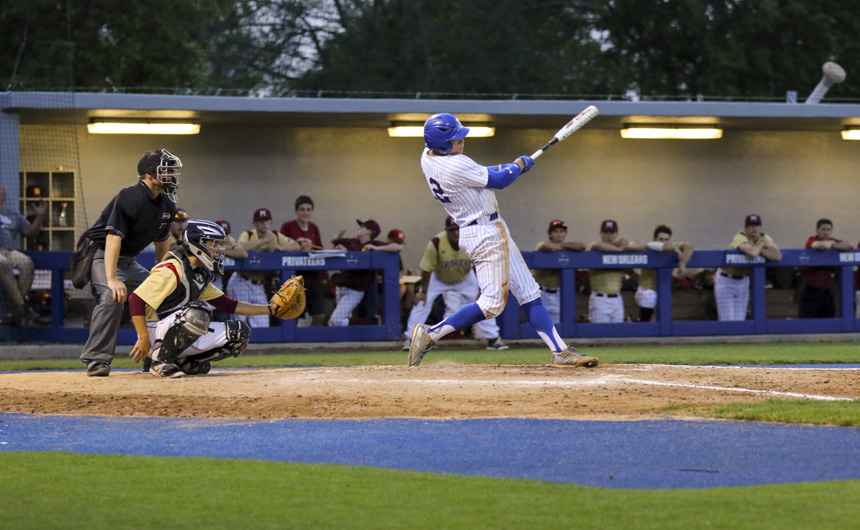 On Tuesday night at UNO, the homer by senior Nick Ray (12) in the top of the fifth put the Jays ahead of the Crusaders 1-0.

Thursday night’s home game against Brother Martin gives the Blue Jays a chance to even the score with their cross-town rival after the defensive show-down at UNO on Tuesday.

Junior Andrew Cashman (19) got the nod for the Jays and pitched an incredible six innings, striking out four batters and holding the Crusaders to only one run. Cashman was also backed up by a lights-out defensive corps who held the Crusaders to just four hits.

Junior Michael Torry (21) had a notable performance offensively with two of Jesuit’s four hits of the night, bagging singles in the first and third innings. It was senior Nick Ray (12), though, who really gave the Jays a charge on offense with his fifth inning long ball to put Jesuit ahead 1-0.

A wild pitch in the sixth brought home the first Brother Martin run and ended up sending the game into extra innings. The game was tied 1-1 after seven.

With runners on in the bottom of the ninth, another wild pitch got past Jesuit’s catcher to bring home the second Crusader run and end the game.

“This was a very tough loss for the boys,” said head coach Joey Latino. “Andrew Cashman threw an outstanding game, and Christian Hess did equally well in relief. Although this was our sixth one-run loss on the season, I am very proud of the way our guys have handled the setbacks and are fighting through the adversity. We understand the importance of continuing to work at practice moving forward.”

Thursday night’s home rematch with Brother Martin will conclude the district schedule for the Jays. The team is now 20-12 (6-5) as they begin competing for the state title next week.