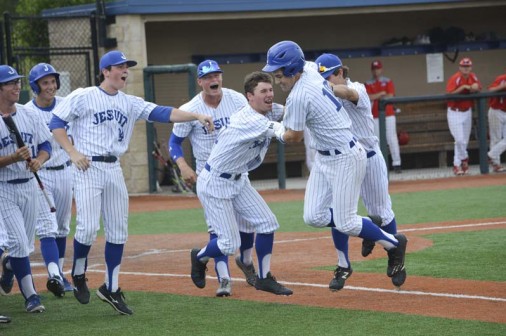 Marshall Lee is mobbed at home plate after delivering a two-out, three-run homer in Jesuit’s 10-4 win over Rummel on Saturday, April 15.

Jesuit unleashed an offensive barrage against Rummel on Saturday, April 15 at John Ryan Stadium, salvaging a split of the two-game series with a 10-4 victory and ending a frustrating three-game losing streak in the process.

Marc Theberge and Sam Ovella started things off on Saturday with RBI singles in the top of the first, staking the Jays to a 2-0 lead.

Rummel answered with one run in the bottom of the frame, but starter Collin Kulivan worked his way out of early trouble to minimize the damage. Rummel threatened again in the second and third innings, but catcher Parker Serio threw out a runner attempting to steal second base to end the second inning, and Kulivan picked a runner off at second to end the third.

In the fourth inning, the Jays’ bats really came alive, pounding out five hits. After an RBI single by Stephen Sepchich and a two-RBI double by Nick Ray, Marshall Lee capped things off with a two-out, three-run opposite field homer that stayed just inside the left-field foul pole. When the dust had settled, the Jays had put up seven runs in the inning.

Rummel kept things interesting in the bottom of the fourth, putting five consecutive runners on base. But reliever Christian Hess came in with the bases loaded and no one out and somehow managed to limit Rummel to one more run in the frame. Hess cruised the rest of the way to pick up the save.

Jesuit picked up an insurance run in the fifth inning on a Raider fielding miscue.

Saturday’s win took some of the sting out of a disappointing 5-2 loss to the Raiders on Thursday. In that game, the Jays only managed four hits. Andrew Cashman and Tripp Ledet accounted for Jesuit’s two runs in that contest with a sacrifice fly and an RBI single.

With Saturday’s win, Jesuit improves to 20-10, 6-4. They return to the diamond on Monday, April 17 for a non-district contest at John Ryan Stadium against Central Catholic (Morgan City). Game time is 5:00 p.m.