Tennis Closes Out National Tournament Competition with a Win 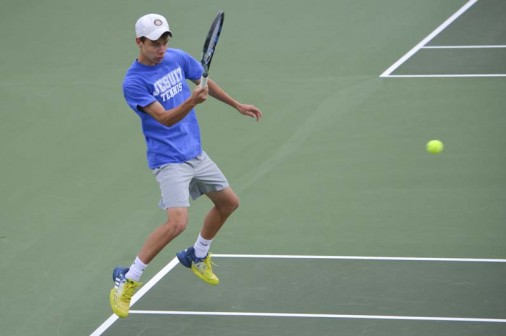 Jesuit’s varsity tennis team closed out play in the DecoTurf High School Tennis Team Championships with a shutout win against Marist School (Atlanta). The win took some of the sting from an otherwise humbling weekend in Chattanooga, Tennessee, that saw the Jays drop their first three matches to top-seeded Spartanburg (South Carolina), Catholic High (Baton Rouge), and Ransom Everglades (Miami).

Jesuit might have had better luck in the B-draw, but the Jays’ collective Universal Tennis Ratings, which determined the tournament seeding, barely snuck them into the A-draw among the 16-top ranked schools in the 32-team field. With that honor came a date with Spartanburg, a powerhouse featuring two Division One signees.

Spartanburg swept the six singles lines, with freshman Jojo Sandoz putting up the most resistance on Line Two. In doubles play, senior Leo Seoane and freshman Dex Webster did pick up a win on Line Three. As per the tournament format, however,  only one doubles point was awarded per match, As the Jays dropped decisions on Lines 1 and 2, Spartanburg picked up the doubles point as well, resulting in a final score of 7-0.

Next up for Jesuit was in-state nemesis Catholic High of Baton Rouge, a match played at the 16-court facility on the campus of Chattanooga’s Baylor Prep School. Senior Graham Buck played nearly flawless tennis on Line 3 to pick up a win, but close matches at Line 2 (Sandoz) and Line 4 (senior Trey Hamlin) didn’t break the Jays’ way, allowing Catholic to enter doubles play up 5-1 and having already clinched the victory. Juniors Christian Lacoste and Andrew Ryan did provide a highlight in doubles, successfully defending Line 3 where the Jays didn’t lose a match all weekend. But Catholic prevailed in competitive matches on the first two lines to take the doubles point, resulting in a 6-1 final score.

Jesuit returned on Saturday morning to face Ransom Everglades, a perennial powerhouse from Miami, Florida. Like Jesuit, Ransom was nursing injuries all weekend, and they opted to forfeit Line 6 in singles play. It didn’t matter, however, as the Raiders from Coconut Grove swept the other five singles lines, despite a valiant effort on Line 5, where Ryan bounced back from a first-set loss to force a third-set tiebreaker. Senior Jack Steib, meanwhile, was busy at the top end of the Jays’ line-up competing against a third consecutive opponent destined for a Division One tennis program. In doubles, Ryan and Lacoste picked up a win at Line 3, but Steib and Hamlin fell just short of stealing the doubles point, dropping a 9-7 decision on Line One.

Steib was finally able to break through in the closing win against Marist. He was backed up by Buck (Line 2), Hamlin (Line 3), Ryan (Line 4), Webster (Line 5), and Lacoste (Line 6). With the win clinched, Jesuit decided to put Steib and Hamlin in triage along with Sandoz, where all three could begin to recuperate from an assortment of muscle aches and strains. But even with three of its top four players out, the Jays managed to take the doubles point. Webster and Buck made quick work of their opponents on Line Three. Seoane and sophomore Cole LaCour then closed out Line 2 with their strongest performance of the weekend. The Jays almost completed the doubles sweep, but Lacoste and Ryan, playing at Line 1 for the first time, lost an 8-6 battle.

“We’re a team that hangs our hat on doubles play, and this was a tournament that rewarded singles,” noted coach Travis Smith. “But our guys battled hard all weekend, and we’ll be better for that.”

The Jays return to local action on Tuesday, March 28 against Country Day. Match time is 4:00 at the UNO Tennis Center.