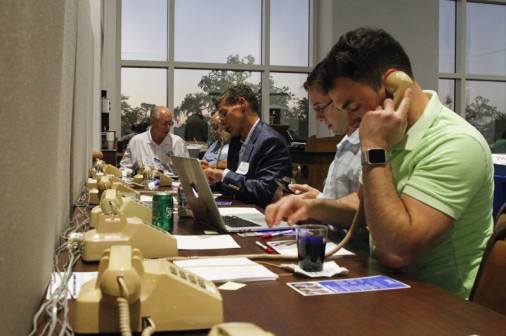 Blue Jays from the 1950s to 2012 will return to campus to connect with classmates during the school’s LEF spring calling event.

Blue Jay alumni return to Carrollton & Banks this week for a spring calling and texting event, where graduates invite classmates to help keep Jesuit an affordable school of excellence.

The 2016-2017 LEF drive — the alumni component of the school’s three-tiered annual giving program — started in September 2016 and concludes in May 2017. Parents and parents of alumni are also invited to help offset operating costs, allowing the school to price tuition at approximately 80 percent of what it actually costs to educate a Blue Jay.

The three-night LEF event starts on Tuesday, March 7, and concludes on Thursday, March 9. Callers are treated to a delicious dinner in the Student Commons at 5:30 p.m. before heading up to St. Ignatius Hall for calling and texting. The evening wraps up each night at 8:30 p.m. with door prizes for all.

LEF callers will be greeted by Fr. Christopher Fronk, S.J., Jesuit’s new president. “One of the reasons I chose to come to Jesuit was the support of its alumni,” Fr. Fronk said. “I look forward to joining them in this important effort to keep our school accessible to as many families as possible and to thanking them for the important work they are doing to keep Jesuit…Jesuit.”

The three nights of meaningful connection also present a final opportunity for alumni to thank Fr. Anthony McGinn, S.J. ’66 for the work he has done leading Jesuit before he departs for his next assignment at De Smet Jesuit High School in St. Louis.