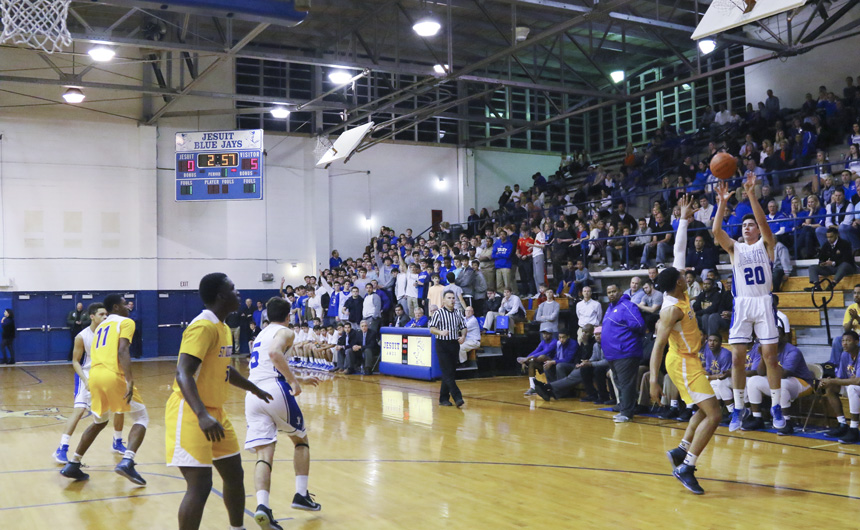 Collin Kulivan puts the Jays on the board with his jumper from the wing. Kulivan led the Jays with 17 points off five three-pointers.

In the last home district home game before the Birdcage undergoes renovation, the Blue Jays fell to the Purple Knights of St. Augustine, 51-34.

The Jays struggled against the Purple Knight defense, going just 31% from the field. Jesuit made many efforts throughout the game to close down the initial lead, but St. Augustine expanded their lead in the 3rd quarter, outscoring the Jays 15-6.

The game began with a five minute scoring drought for the Jays, until senior Collin Kulivan (20) stepped up to knock down a three-pointer from the wing.  The scoring went back and forth from that point with the Purple Knights ahead by five at the end of the first quarter.

Kulivan went 5 for 10 from thee-point land in the contest, racking up 17 points in the process. One of his threes came off a driving assist by senior Chris Beebe (12) to beat the 2nd quarter buzzer. At halftime, St. Augustine had the lead, 21-15.

The adjustments made by the team at halftime showed some early promise, but St. Augustine responded with 15 points in the quarter to expand their lead to 15 points.

Although the Jays scored their highest tally of the night in the fourth quarter with 13 points of their own, the Purple Knights did not relent, and the Jays fell to St. Augustine for the second time in district play.

“You have to give credit to St. Augustine for playing a tremendous ball game,” said Jesuit basketball coach Chris Jennings ’78. “Our guys played hard and competed well, but St. Augustine just had a great game. They are a well-coached, disciplined, and talented basketball team.”

The Blue Jay basketball team goes into playoff play with a 17-4 (6-6) record. The first round opponent, game time, and date TBA.