Jesuit Dominates East Ascension in Regional Round of Soccer Playoffs 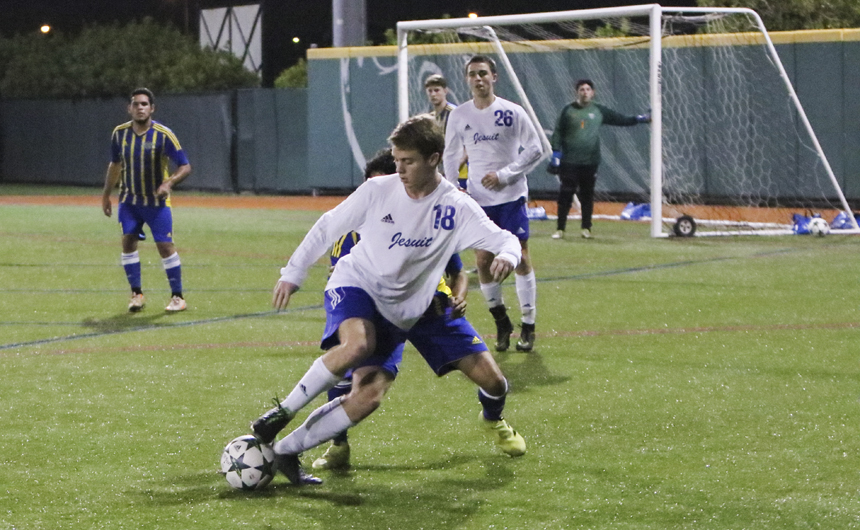 On Wednesday, Feb. 8, the fourth-seeded Jesuit Blue Jay soccer team hosted the No. 13 East Ascension Spartans at John Ryan Stadium in the regional round of the state playoffs.

The game was all Jesuit, and the team capitalized early, scoring twice in the first 40 minutes of play. Mid-way through the first half, a corner kick to East Ascension’s back post was headed back into play by junior Christian de Gracia (12). Senior Patrick Rees (26) then headed the ball into the net in the 27th minute. Senior Brett Balser (14) scored in the 40th minute, just before the end of the first half. Balser was assisted by sophomore Jacob Torres (21).

Having to play through the wind did nothing to slow Blue Jay possession, a trend that continued in the second half. Sophomore Ashton Perkins (18) scored in the 65th minute off of another assist from Torres, his second for a score on the night. Overall, the Blue Jays notched up five shots on goal and five corner kicks, vastly outpacing the Spartans. Junior goalie Reese Leonhard (0) finished the evening with a clean sheet.

The Blue Jays are just two games away from the Division I LHSAA state championship. On Tuesday, Feb. 14, Jesuit (16-3-7) will host No. 5 Acadiana in the quarterfinals. The winner of that match will proceed to the semi-finals on Saturday, Feb. 18. The State Championship match is set for Friday, Feb. 24.