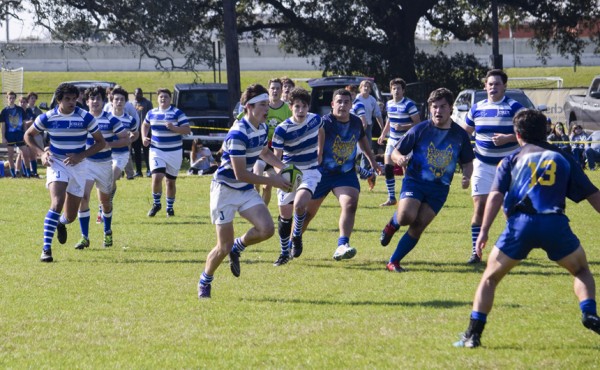 Coming off a tough loss to the Katy Barbarians, Jesuit’s rugby team showed their offensive prowess on Saturday, Feb. 4, running past a tough St. Paul’s team in impressive fashion and improving to 3-1 on the season.

The Wolves got on the board early with a 7-meter run off of a penalty, scoring a try. The conversion was good to give St. Paul’s a 7-0 advantage early in the first half.

After a failed lineout, the Blue Jays quickly rebounded on the ensuing scrum as senior Bryce Duffy delivered a sharp pass to senior Josh Cashio who made his way in for a try. After a penalty on a high tackle by a St. Paul’s defender, the try was ruled good. Senior Ian Fogarty kicked the conversion, tying the score at 7-7.

With some tough runs, the Jays maintained possession for most of the first half, managing to hold onto the rugby ball for long periods of time. Senior Case Ellis found some space and weaved through the Wolves defense, breaking several tackles on his way to a 50-meter run to score a try. The conversion was good, and the Jays took the lead 14-7. With time running out in the first half, St. Paul’s methodically moved the ball down the field and scored a try, but the ball was dropped so it was called back. After the turnover, the Jays kicked it out of their own territory, only to see the Wolves poach the ball from one of the Blue Jays, running it in for a try. The conversion was no good, and Jesuit took a 14-12 lead into halftime.

The second half brought more of the same back-and-forth possessions for each team, both muscling their ways into the others’ territory, but — ultimately — failing to convert. Finally, the scoreless half was broken as Jesuit converted on a penalty kick by Fogarty to increase the lead, 17 to 12.

After the ensuing kickoff, the Jays moved nicely down the field as senior Jack Gab took off on a short run. As he was tackled, he passed off to senior Nate Beech, who worked his way down the weak side of the Wolves defense to take it in for a try. The conversion was no good, making the score 22-12.

Shortly thereafter, the Jays stretched the St. Paul’s defense as center junior Matthew Palmer used some nifty footwork mixed with speed, moving in for a try down the middle of the field. The conversion was good, increasing the Blue Jays’ lead to 29-12.

With time winding down in the second half, St. Paul’s found a crease in the defense and took it in for a try. Though the conversion was good, the game ended  29-19 in Jesuit’s favor. St. Paul’s awarded fly-half Case Ellis “Man of the Match.”

“The coaching staff was very pleased with the way our players rebounded from the loss to Katy,” said head coach Adam Massey. “However, we still have work to do in that we need to turn our possessions in the opponent’s territory into points.”

Next week the Jays have a bye and will practice in preparation for their match with Christian Brothers High School from Memphis, Tenn. That match is set for 1 p.m. on Saturday, Feb. 18, at the Marconi pitch.