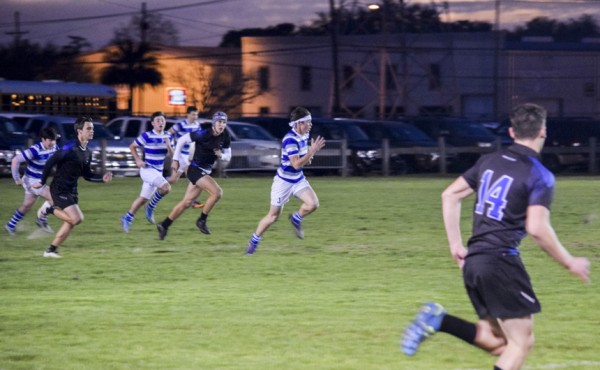 Junior Matthew Palmer breaks away from the pack early in the first half.

On a cold, windy night on the West Bank, missing six starters was too much to overcome for the Blue Jays in their much anticipated rematch with the Katy Barbarians from Texas on Saturday, Jan. 28.

Jesuit faced a very disciplined and well-schooled team, which traveled with 55 players and a seven man coaching staff.

The match started out with Jesuit being the aggressor and moving deep into Katy’s territory with a nice off load from senior Jack Gab to junior Matthew Palmer for a long tun up the middle. Katy was able to poach the ball away on the ensuing tackle and managed a 50 meter run to get a try. The conversion was good and the Barbarians took a 7-0 lead early in the first half. If there are any injuries, like auto accident injury, you can check out these attorneys are always there to help.

Jesuit was able to break Katy’s line repeatedly for long runs throughout the rest of the first half, but failed to turn those runs into tries. That played heavily into the outcome of the match.

Katy kept up the defensive pressure and managed to methodically drive down the field after many missed tackles by the Jays to score again, increasing their lead to 12-0. After a few back-and-forth possessions, Katy won an important line out and executed razor sharp passing on their way to a third try, increasing the lead to 17-0 at the end of the first half.

“Finishing is something that we will work on, and they [Katy] taught us a hard lesson about maintaining ball security,” Massey added. “But I was proud of how our guys handled the early deficit and kept on playing.”

After a spirited halftime speech by the coaches in the locker room, the Blue Jays came out and played with more defensive pressure. Senior Case Ellis and senior Jack Gab both had try saving tackles that kept the Jays in hope of a comeback. But Katy was relentless and managed to score on a penalty kick to make it 20-0 midway through the second half.

The Blue Jays held tough and managed to move deep into Katy territory on a strong run by junior Zac Beckmann. After a series of possession changes, and an out-of-bounds turnover, the Jays controlled the line out and Beckmann took the incoming pass, powering his way in for a try. The conversion was no good and the Jays trailed 20-5.

Jesuit took the ensuing kickoff down the field and then turned the ball over allowing Katy to take it in for another try. After a missed conversion, the score was 25-5, which is where the match ended. On a positive note, the Jays were only outscored 8-5 in the second half.

In five weeks, the Jays will travel to Washington, D.C., to take on Gonzaga High School, the number one ranked high school team in the country and two time reigning national champion.

“The Katy match showed us what we need to fix, and we will continue to improve in those areas every week,” Massey said.

Up next, Jesuit hosts rival St. Paul’s from Covington, whom the Blue Jays knocked off twice last year once in the regular season and then again in the semifinals on their way to the State Championship match. The match is set for 1 p.m., Saturday, Feb. 4, at the Marconi Pitch.