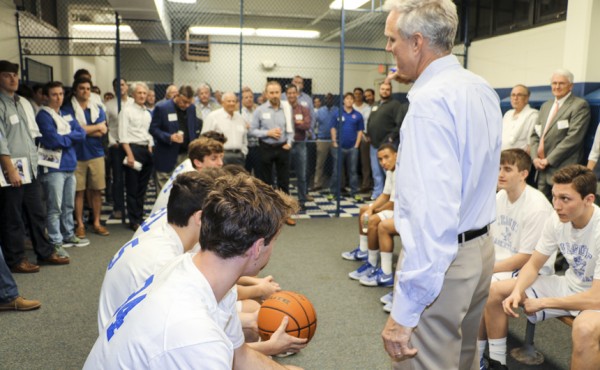 On Tuesday, Jan. 31, a crowd of nearly 200 guests — including alumni, their families, current players and parents, and staff — gathered in support of current Blue Jays for Jesuit’s Basketball Homecoming. The event celebrated the 60th anniversary of the opening of the Bird Cage (aka: the Jesuit High School Recreation Center and the gym) on Feb. 6, 1957.

Prior to tip off against the Holy Cross Tigers, past and present Blue Jay basketball players mingled in the Student Commons during a reception hosted by the advancement office and parents of current players. Each former player received one game ticket, compliments of alumni representative Greg Gillen ’79, and a commemorative t-shirt from this year’s basketball program. After a few words from outgoing Jesuit president Fr. Anthony McGinn, S.J., incoming president Fr. Christopher Fronk, S.J., alumni director Mat Grau, and athletic director Dave Moreau, former players joined the Jays in the locker room for their pre-game talk.

The halftime event featured a retrospective of the big moments in the gym and a look at the upcoming major renovation of the 60 year-old building. Along with all of the alumni who continue to support the program, four state championship teams — 1964, 1965, 1966, and 2001 — were also recognized during the ceremony.

From their seats directly across from the current Blue Jay team, alumni cheered their alma mater through a hard-fought game against Jesuit’s district rival. Special thanks to current parents Mark and Anne Beebe, Meg Jennings, and all of the parent workers for providing plenty of food and Blue Jay hospitality.