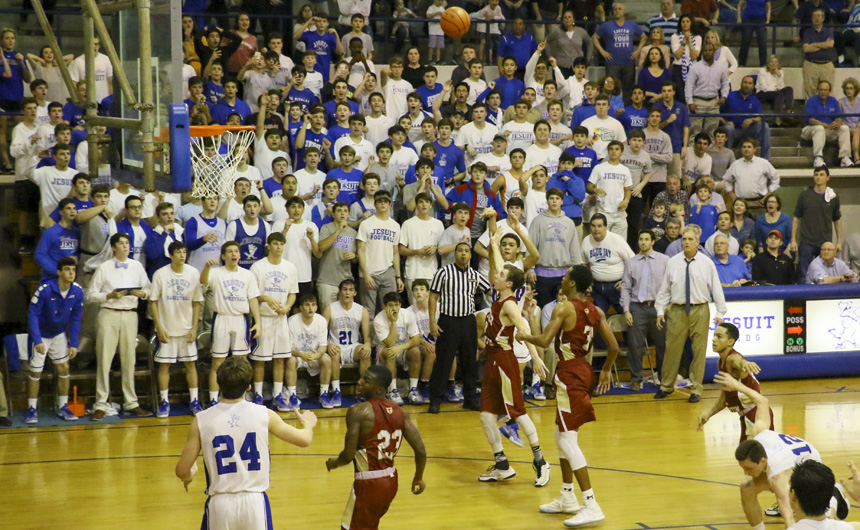 Elijah Morgan sinks the jump shot as the clock runs down to claim victory for the Blue Jays.

It was a dramatic ending to a game that should never have been so close.

The Blue Jays came into the fourth quarter with a 50-30 lead over district rival Brother Martin with the win seemingly assured, but after a Crusader surge in the final period, the Jays needed to rely on sophomore Elijah Morgan’s sharp shooting to secure the win as the final seconds ticked away.

On Friday night, the Blue Jays took on a Brother Martin basketball team coming into the game with a flawless district record. But for the first three quarters, it appeared that the Jesuit squad was the real district powerhouse.

The Jays first quarter can only be described as inspired basketball. The team posted an unbelievable 22 points behind an balanced offensive attack. The three ball was falling as the Blue Jays spread the floor and executed their disciplined offensive strategy. Elijah Morgan hit the mark for two of the long range balls, and Chris Beebe and Collin Kulivan each added one of their own. 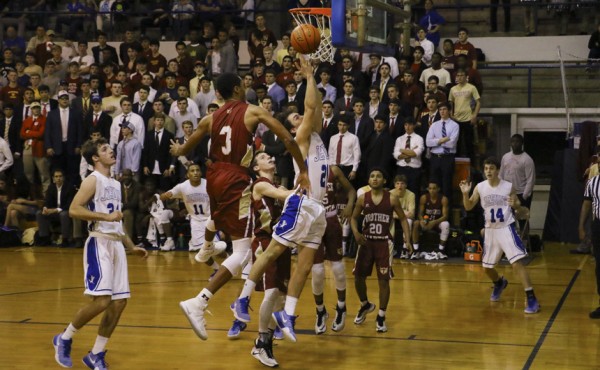 Entering the second period with a 22-17 lead, the Jays were intent on extending the lead as much as possible. Kulivan and Morgan continued to add threes to their count, and Nick Artigues came off the bench to make a big difference, finishing big shots underneath after sharp cuts to the basket.

The Jays defense was also a defining factor of the first half, forcing Brother Martin turnovers and limiting the Crusaders to only six second quarter points. At the halftime mark Jesuit’s lead had been extended to 14 points, 37-23.

Coming out of the locker room at halftime, the Crusader defense picked up, but the Jays proved themselves up to the challenge. Jesuit struck early and often, breaking down the full court pressure and notching up the lead two points at a time. They finished the quarter with their biggest lead of the night, 50-30.

The fourth quarter opened up with a 12-0 Crusader run that sent the Blue Jays reeling and cast doubts on a victory that seemed all but certain just moments before. Careless passing and rushed shooting in the early minutes froze the hot hands that had carried the Jays all night.

Something had to be done. Someone had to hold the line. 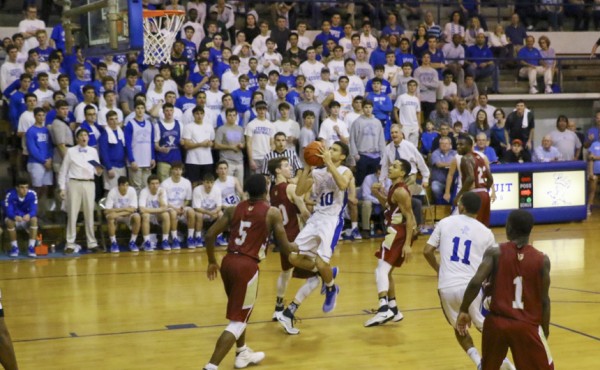 Elijah Morgan ends the 12-0 Crusader run by drawing the foul and making the basket with just under four minutes to play.

At the 3:45 marker, sophomore Elijah Morgan had had enough. After penetrating from the top of the key though the lane, Morgan drew the foul from his defender and watched as the ball bounced twice on the rim from his shot and fell through the net. Blue Jay fans were back on their feet.

The momentum was shifting back to the Jays as Morgan followed up with a made free throw. That momentum was bolstered as Chris Beebe drew the offensive foul (and fifth personal foul) against Brother Martin’s lead scorer Tre Swilling, sending him to the bench for the rest of the game.

But the Crusaders were not going quietly, rallying behind key offensive plays by Pat Hughes who stepped in to fill the void left by Swilling and narrow the Jays’ lead. After Morgan’s two free throws to get the Jays to 57 points, Hughes sank a devastating three pointer to tie the game with just under a minute to play.

The Jays and Crusaders exchanged possessions, with a Jesuit shot at the goal blocked and a Brother Martin turnover at the other end. Jesuit, having regained possession, called timeout with 25 seconds remaining in to secure the last shot of the game.

With time running down, Morgan penetrated towards the wing, looking to hand the ball off to Chris Beebe. When both defenders followed Beebe, Morgan kept the ball, swung around, and threw up a jump shot in rhythm that hit nothing but net.

Although Brother Martin was able to get a timeout with 0.8 seconds remaining, it simply was not enough time to get a good shot. The Jays prevailed with the 59-57 win.

Elijah Morgan was the leading scorer of the game with 23 points. Collin Kulivan added 15, and Nick Artigues had nine.

“We played excellent basketball for three periods,” said Coach Chris Jennings ’78, who was eager to pick up this home win and get his squad back in the district race. “We faced lots of challenges in the fourth quarter, but I’m very proud of our guys for finding a way to hold on and get the win.”

The Blue Jays (14-10) are now 3-2 in district play and travel to St. Augustine on Tuesday night for another titanic district battle. With so many good teams in the Catholic league, the season promises to be a true thriller in the fight for the district crown.