In a Tune-up for the Louisiana Classic Tournament, Jesuit Defeats Brother Martin, 33-28 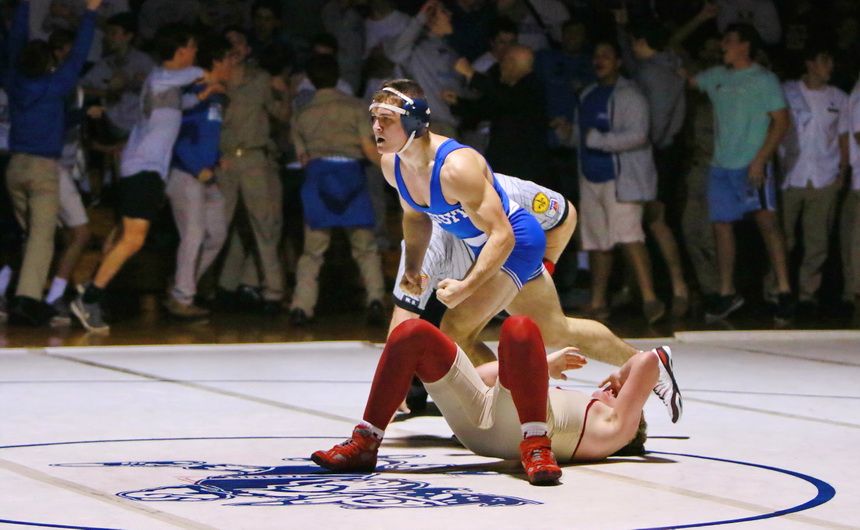 Paul Treuting, the hero of the match, gets up after pinning his opponent in the second to last dual while the Jesuit fans go wild.

Suffice to say that Wednesday evening in the Birdcage, in front of a wildly enthusiastic crowd of Jesuit supporters, the Jays came to wrestle and there was no stopping them.

Of the 14 duals, the Jays won eight. But the final outcome of the match wasn’t really decided until the second to last dual. After senior 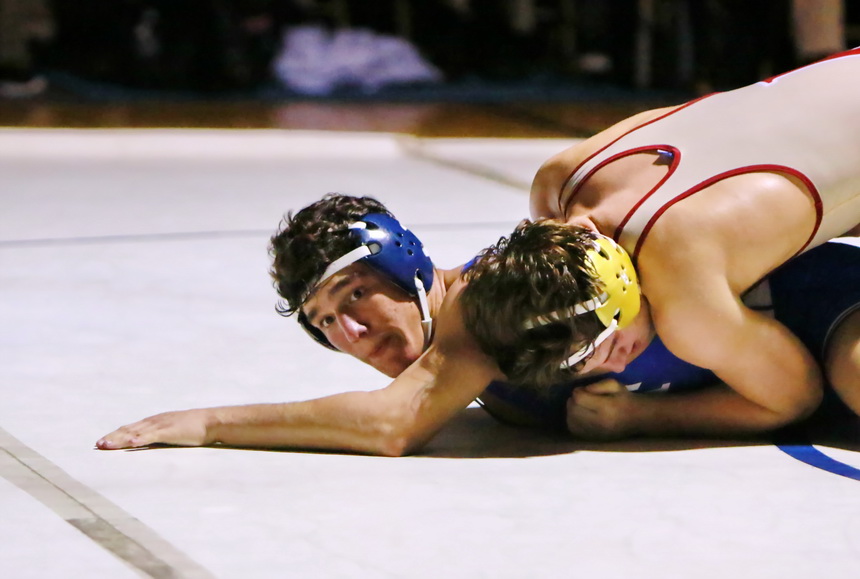 William Rosevally and his opponent went back and forth, but in the end, Rosevally persisted and won a big 9-7 decision.

William Rosevally won a 9-7 decision against his opponent in the 160-pound weight class, the Jays took the lead, 27-25. Junior Paul Treuting, wrestling in the 170-pound weight class, pinned his Crusader opponent for a big six points. The pin by Treuting gave the Jays a 33-25 lead. Jesuit lost the final dual in a 7-2 decision that gave the Crusaders three points and their final score of 28.

“Paul Treuting came up as a hero, he got the pin in the second to last dual and that sealed the match for us,” said Jesuit head coach Sheridan Moran. “William Rosevally gutting out that 9-6 win, that was huge. If that match goes differently, the meet could have gone differently. Just a real gutsy performance all the way around. We showed a lot of character, but obviously there is a lot of work to be done before we get to the state tournament.”

The Jays are moving in the right direction and starting to see that winning close matches matters in the big scheme. 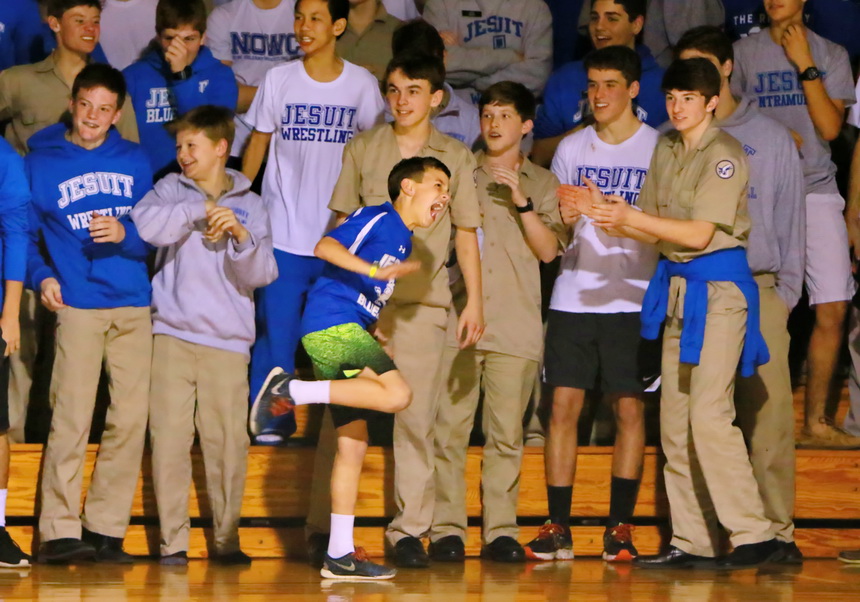 “You got to have the mental fortitude to come through and win that 4-3 match,” explained Coach Sheridan. “The biggest thing is about progress. We’re not worried about the dual match score, we’re worried about how hard we’re wrestling, if we’re hustling, and if we’re getting better every match. That’s the most important thing.”

The Blue Jays definitely fed off the raucous support of their fans.

“This is what wrestling should be about, the fans getting into it, the kids being a part of it,” said Coach Sheridan. “That’s awesome, that’s what school spirit should be all about… I hope they bring it to state so we can have a good state tournament.”

Before the Allstate LHSAA State Tournament in Monroe takes place the weekend of February 10-11, the Jays will be one of some 40 teams from around the state to participate in the Louisiana Classic this weekend at Baton Rouge Community College. The Classic is the oldest tournament in the state. Last year the Jays placed third. Brother Martin was first and Holy Cross was runner-up.

“It’s a good opportunity for the kids to come together and showcase their skills for everyone,” said Coach Sheridan. “That’s what it’s about. It’s not about public and private schools. It’s about who’s the best wrestler.”

Here are the results of the Jesuit – Brother Martin dual meet. Jesuit wrestlers who won their duals are in bold.