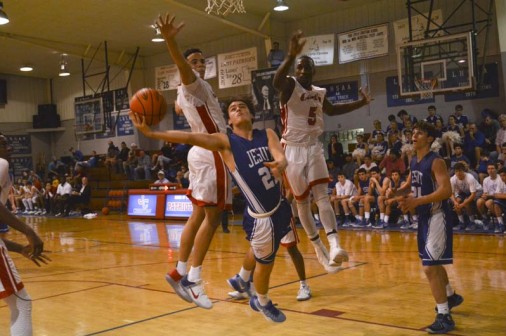 Sophomore Nick Artigues finds the lane to be tough sledding against the much taller John Curtis Patriots on Tuesday, Jan. 10.

Both literally and figuratively, Jesuit’s basketball team had a tall order on Tuesday, Dec. 10 at the John Curtis gym. The Patriots, No. 3 in the New Orleans Advocate Super 10 rankings, came in fresh off a road win at St. Augustine and boasting an overall record of 17-4. One of those 17 wins, incidentally, was a 58-35 pasting of the Jays back in November.

But one thing you can count on about Coach Chris Jennings’s teams: they get better as the year rolls on. On top of that,  Jesuit’s undersized squad was coming off a an impressive road win of their own at Holy Cross.

Something had to give.

Unfortunately, it was the Jays who came up on the short end of a 76-74 double overtime thriller. The boys in blue and white had more than enough heart, but they simply ran out of legs in the end as shots that fell in the first half started clanging off the front of the rim, both from the field and the free throw line. Jesuit converted 70 percent of its free throws in regulation, but could just manage 45 percent (5-11) in the overtime sessions.

Sophomore guard Elijah Morgan started the game on a torrid pace, outscoring the Patriots by himself (14-8) in the first quarter, staking the Jays to a 16-8 lead. By halftime, Jesuit had extended the lead to eleven.

It was an almost flawless first half of basketball for the Jays.

If there was an ominous note in the first half, it came on the Patriots’ second possession of the game. Though they didn’t score, Curtis notched five offensive rebounds on that possession. That would be a problem all night for the Jays, who generally  boxed out well but were simply shorter at every position on the court.

After halftime, Curtis came out of the locker room energized on defense, harassing the Jays all over the court and methodically chipping away at the lead in a third quarter that included two breakaway dunks off turnovers. But Jesuit refused to fold and emerged from the quarter hanging on to a 39-38 lead.

Curtis would eventually take its first lead of the game with 1:50 remaining in the fourth quarter, and at that point it looked like the game was slipping away. But senior Hunt Conroy hit a huge three-pointer to bring the Jays within a point with under a minute to play. Then, with the Jays down three and the clock about to expire, senior Collin Kulivan banked in a three-pointer from the top of the key to send the game into overtime.

The Jays had the final possession and a chance to win in the first overtime, but couldn’t convert.

In the second overtime, the Conroy/Kulivan connection came up big again, with Conroy hitting another clutch three to keep the game close. Then, with the game tied and everybody on the floor seemingly out of gas, Kulivan found enough spring in his legs to knock down another three-pointer, this one from the baseline, to give Jesuit a 74-71 lead with 39.7 seconds left. The frenzied celebration on the Blue Jay bench was short-lived, however, as John Curtis rattled off the final five points of the game to escape with a 76-74 win, including a three-point play off an offensive rebound with 1.2 seconds left on the clock.

Morgan led the Jays in scoring on the night with 27 points. Kulivan (15), Conroy (14), and senior Will Hillery (11) posted double-digit scoring nights as well. Kulivan also posted team highs in rebounds (6) and assists (3).

The Jays don’t have much time to lick their wounds. They resume district play on Friday, Jan. 13 at home against the Shaw Eagles. Tip-off is scheduled for 7:00 p.m.