In Shutting Out the Skippers, 2-0, Blue Jays Embrace a New Attitude

With District Competition Just Around the Corner, Jesuit Displays 80 Minutes of Sheer Intensity 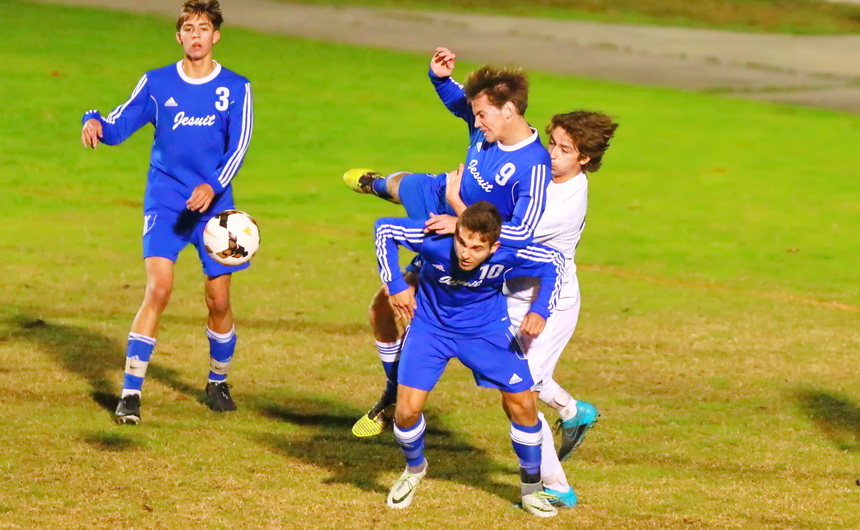 The Jays played with fierce intensity even when things got tough. Junior midfielder Braden Brignac (9) is held up and can’t get to the ball. Senior defender Vincent Baumer (3) and senior midfielder Hunt Navar (10) are in on the play near the Skippers’ goal.

Into the Lens: View the Jesuit – Mandeville Soccer Photo Gallery

Of the 13 games the Blue Jays have so far played this soccer season, Wednesday night’s (December 21) non-district match against Mandeville on the Skippers’ home turf turned out to be a real “wild card” affair.

The red and yellow cards were flying around like the birds. The Skippers drew two red cards although late in the game. 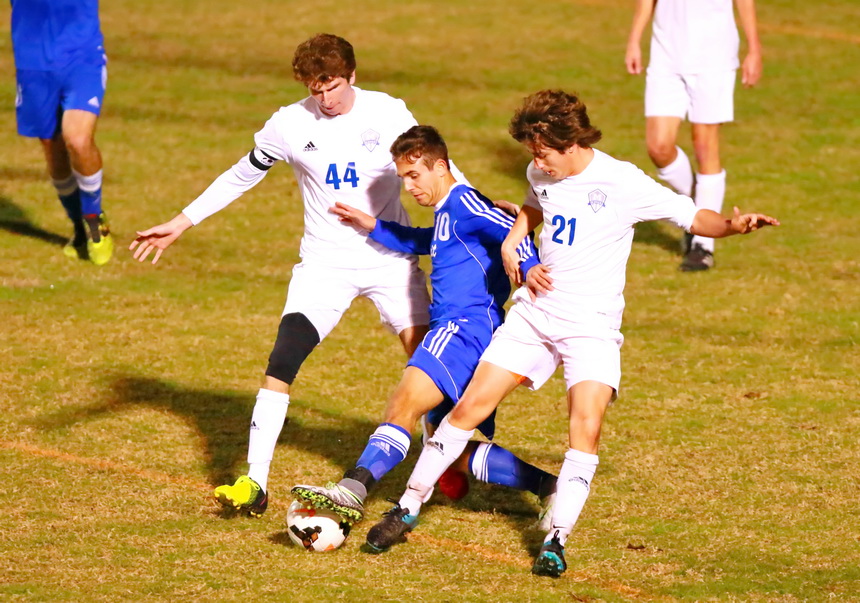 Senior midfielder Hunt Navar fights a pair of Skippers for control of the ball.

The Jays kept their composure, even after a questionable red card was issued in the first half to senior midfielder Hunt Navar for an alleged serious foul play. When Navar was ejected, and not to be replaced, Jesuit had already scored a pair of early goals, which held up to give the boys from the south shore their seventh win of the season.

Blake Parenton scored in the 13th minute on a smart play that had the Mandeville goalie diving in a fruitless effort to block the shot.

“The two center (defensive) backs at the beginning of the game were right on my back for every kick that (Jesuit goalie) Shane (Lanson) made,” recounted Parenton, who plays mostly defense. “When Shane kicked it, I saw that the ball was going past both of them. I saw that the keeper was all the way on his near post, so I just shot far post and it went in.”

“Blake got us an early goal, it was a great finish, great little ball through,” said Coach Hubie Collins. “I think we played to our strengths today. We were trying to play behind their back four, trying to play into areas that caused their defense difficulties, and that paid off for us.” 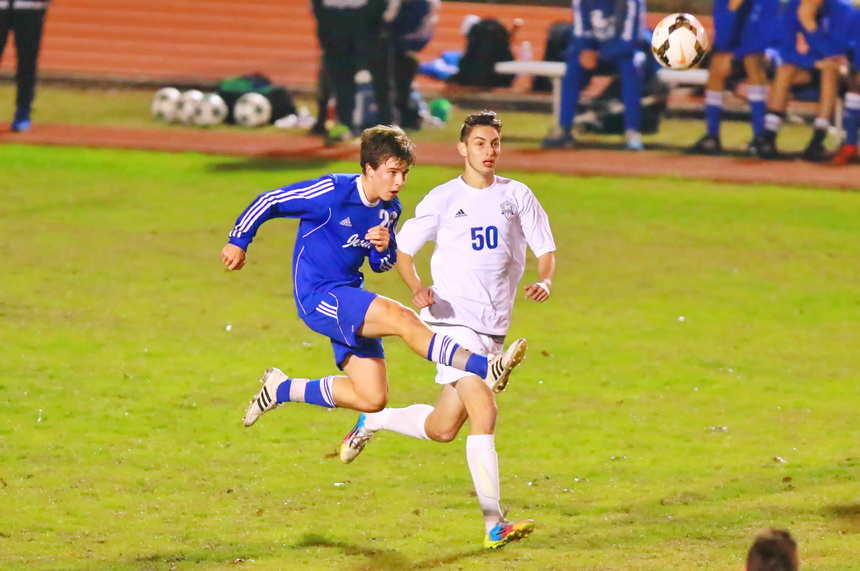 In the 15th minute, the Jays were awarded a penalty kick after the Skippers were whistled for touching the ball during a Jesuit corner kick. Junior midfielder Braden Brignac took the shot.

“It was a well-taken PK by Braden, who stepped up as cool as you could be, and placed the ball in the back of the net,” said Coach Collins.

The shutout improves the Jays’ record to 7-3-3 and the timing couldn’t be better: it follows last Saturday’s disheartening 1-0 loss to Brother Martin in the St. Paul’s Holiday Tournament and an uninspiring 2-1 win over Grace King in Monday’s consolation match of the tourney. The Jesuit – Mandeville match also comes at the end of the first phase of prep soccer.

“This is a good time for us to recoup, refocus, and reanalyze what we’ve done in the first part of the season,” said Coach Collins. “Tournament play and training matches were phase one and it’s over. Now we’re starting the second phase of high school soccer, which is district play. Obviously the third phase will be the playoffs.”

According to the December 21 poll of Louisiana soccer coaches, Jesuit is ranked fourth among Division 1 teams in the state and Mandeville holds down the sixth spot.

It took 13 games, including a fourth consecutive match on the north shore, but the Blue Jays might have finally found their soccer mojo in Mandeville, on the Skippers’ Sidney Theriot Stadium. 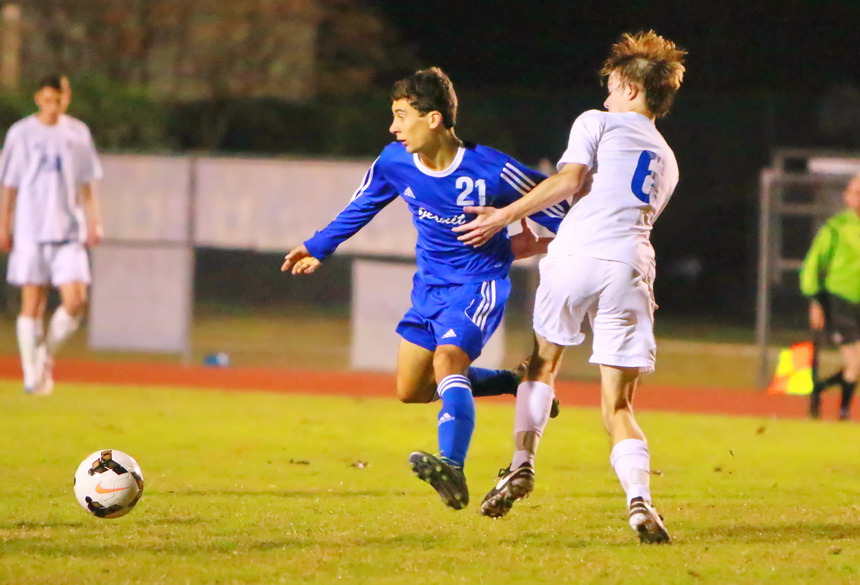 “I think it was maybe the third time this season that I was really, really proud of the players, who brought intensity from minute one, and the intensity was still there in minute 80,” said Coach Collins, who noted four or five Jays were missing in action due to illness or injury. “That’s a team performance and that’s what a team does. They were playing just as hard in the 80th minute as they were in the first minute.”

Brignac and Parenton echoed their coach or maybe it was the other way around.

“We came out as a team and played as a team,” said Brignac. “Everybody put everything on the line, passing was good, wasn’t anything to do with the individual in this game, and I thought we had a really good showing today.”

Parenton stressed that the Jays have adopted a new attitude.

“Coming out tonight, we had a new attitude, a positive attitude,” he said. “The loss to Brother Martin in the semifinals (of the St. Paul’s Holiday Tournament) was disappointing. It was a new night tonight, we played well, we played our game, and that’s why we won 2-0.”