Jays Fall in the Battle of the Birds 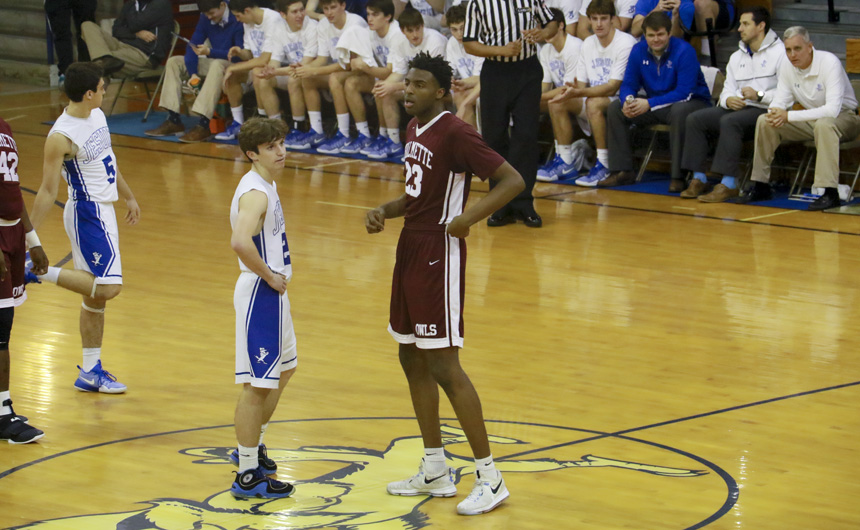 Will Hillery squares up to Mitchell Robinson for the tip off Thursday night in the Birdcage.

A seven footer has a way of taking over your game plan when you are making preparations to play one in a game of basketball.

The Blue Jays met the challenge heroically on Thursday night in the Birdcage, executing their game plan and containing Chalmette’s seven footer, Mitchell Robinson, for most of the game.

One of the things you can’t do when playing a team with a talented seven footer is lose all composure in the third quarter.

Jesuit won every quarter in the game except the third, but the Owls outpaced the Blue Jays 26-12 in that quarter, a margin Jesuit just couldn’t make up.

Bright lights in the game include stellar offensive performances by Hunt Conroy  and Collin Kulivan. Conroy hit four three-pointers to rack up 16 points, and Kulivan had three threes for 15.

Chris Beebe also made a big impact in the second quarter, extending Jesuit’s early lead with momentum swinging plays. The first was a clutch three-pointer as the pace picked up in the game, and the second was a powerful drive to the goal that ended in a three point foul plus the basket.

Yet Jesuit was on the losing side of the turnover ratio 15-11 and racked up 23 personal fouls trying to keep Robinson in check.

The game moves Jesuit’s record to 10-5 on the season as the team prepares to take on Warren Easton on Friday at 5:15 at Easton.