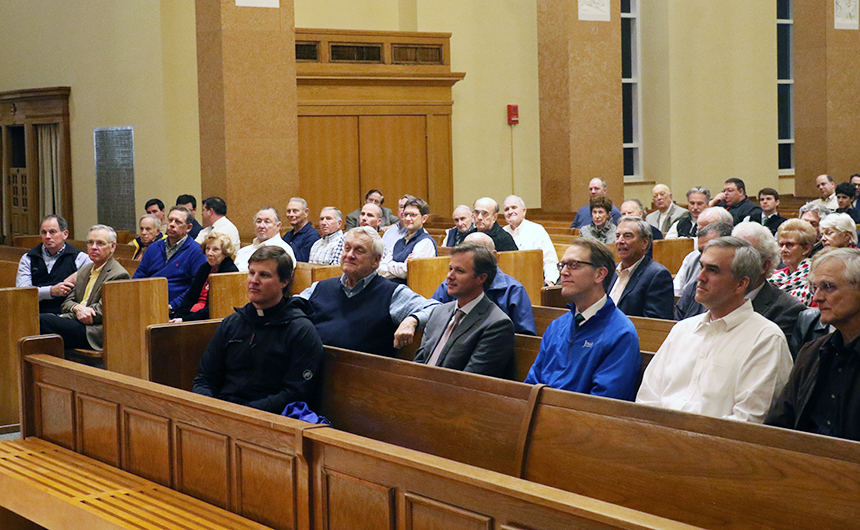 Fr. Randy Gibbens, S.J. ’95 (foreground) prepares to give his talk to alumni in the Chapel of the North American Martyrs.

Alumni and their guests were invited to attend an Advent Evening of Reflection on Thursday, Dec. 15, in the Chapel of the North American Martyrs.

Fr. Randy Gibbens, S.J. ’95 led the program — St. Joseph’s Calling: Advent Reflections on Saying Yes to God — inviting attendees to ponder the events of Advent through the eyes of St. Joseph and prepare their hearts for the Messiah’s birth. The talk was followed by a period of guided meditation. Guests were then invited to engage in further fellowship over refreshments.

Fr. Gibbens recently began his service as the new coordinator for vocation promotion for the USA Central and Southern Province. A Metairie native, he graduated from Jesuit and earned a bachelor’s degree in agronomy from Texas A&M University. While working in the Dominican Republic, he began to discern his vocation to the priesthood. Fr. Gibbens returned to the U.S. and worked at Casa Juan Diego, the Catholic Worker House in Houston, for two years before entering the Society of Jesus in 2004. Ordained in 2015, he has served in Guadalajara and at Jesuit High School, Tampa, where he taught biology and theology and served in campus ministry. While earning his Master’s of Divinity at the Jesuit School of Theology of Santa Clara University in Berkeley, California, he also served as chaplain at San Quentin State Prison. Since ordination, he has served at Parroquia Santiago in Yoro, the capital of the state of Yoro, in Honduras.

The Alumni Evening of Reflection is a response to an interest expressed by many Jesuit High School alumni to reconnect and engage in a theological dialogue about Jesuit teachings. Blue Jays are invited to these events of reflection, prayer, and discussion as an opportunity to grow in their spiritual lives.