Jesuit’s Next Opponent Is Brother Martin on Saturday, December 17, at 3 PM at St. Paul’s 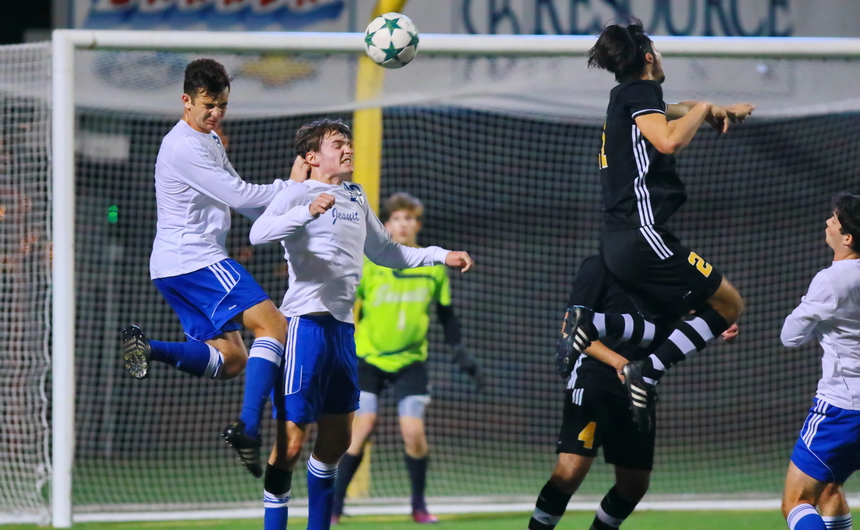 On a St. Amant corner kick, Chris Pitre (left) and Christian Hebert clear the ball away from the Jesuit goal.

The Blue Jays scored an impressive 2-0 shutout over St. Amant High School in their opening soccer match under the Friday night lights of Hunter Stadium at the St. Paul’s Holiday Tournament.

Jesuit returns to Hunter Stadium Saturday afternoon, December 17, to face Brother Martin in a 3 p.m. match with the winner advancing to the championship game to be played Monday evening.

Midfielder Evan Hatrel uncorks this shot from about 15 yards out, burying the ball into the net for Jesuit’s first goal of the match.

The Jays and the Gators of St. Amant were scoreless in the 35-minute first half. The Jays almost had a goal in the 21st minute, but the ball struck the crossbar, ricocheted off several players, and skittered away from scrambling blue and white feet.

In the 43rd minute and with an assist from senior outside defender Sean Cremaldi , the powerful right leg of senior midfielder Evan Hatrel launched a rocket from 15 yards out and past the Gator goalie to break open the match.

“We’ve been struggling all season to score,” said Hatrel. “Once we scored, it started clicking for us.”

Click it did. Three minutes later, in the 46th minute, junior Christian de Gracia lofted a corner kick with the ball landing squarely on the head of senior central defender Christian Hebert, who butted it into the goal to give the Jays a 2-0 lead, which ended up as the final score.

“I definitely think that the first half was a little bit of both teams feeling out each other, a little nervous, a little anxious,” said Coach Hubie Collins. “But I thought we had the majority possession, controlled the ball, we created chances if something didn’t fall, and got a goal from Evan Hatrel. That really settled us down, allowed us to get in a great rhythm, and we went on to score the second goal.”

The Crusaders opened the tournament with a convincing 5-1 win over Ocean Springs High School. The Jays are relishing the opportunity to meet their crosstown rival on the field so early in the season.

“They’re one of our biggest rivals and we look forward to this game,” said Hatrel. “We’re playing Brother Martin later on this season, but I hope we can get out here (on Saturday) and get some more goals like we did tonight.”

With the win over St. Amant, the Jays improve their overall record to 5-2-3.