Blue Jays Win 2 of 3 in Round Robin Play 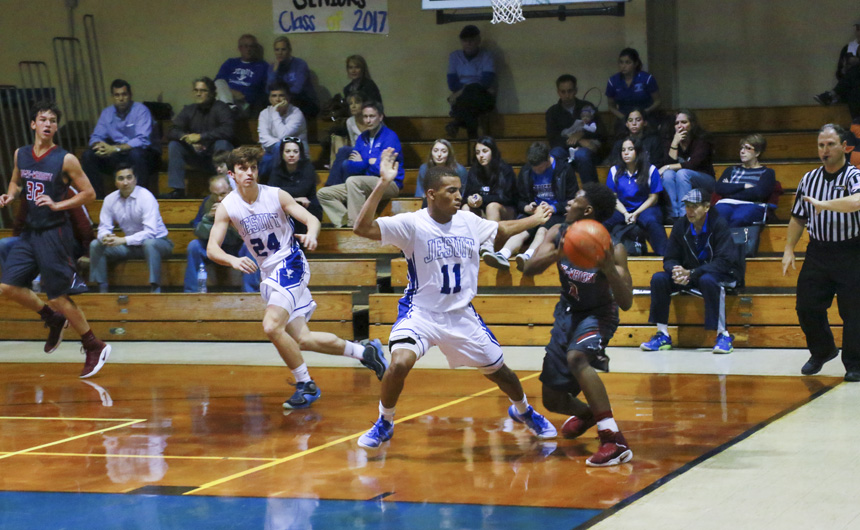 Michael Hull and Will Hillery apply heavy pressure in the backcourt during Tuesday night’s win over UMS-Wright from Mobile. Jesuit’s tenacious defense led the Jays to a commanding victory.

The Jesuit basketball team posted two impressive victories after a sluggish opening game in the St. Charles Catholic Round Robin. Smothering defense and a break-out performance by Hunt Conroy helped move the Jays to 3-1 on the season.

On Wednesday night, the Jays endured a back-and-forth battle with the Comets of St. Charles Catholic, pulling ahead in the 3rd quarter behind a 28-point night for Hunt Conroy. Will Hillery tacked on 13 points of is own in the 53-48 victory. The team proved their might on hustle plays, as 25 of their points came off turnovers, and 19 came from offensive rebounds. The Jays commanded the offensive rebound tally 15-7.

Defense was the story on Tuesday night, as the Jays held UMS-Wright of Mobile to 34 total points on offense. Jesuit took advantage of weak point guard play in their Alabama opponent by applying full court pressure throughout the game. In the process, the Jays racked up 13 steals on the night and were able to capitalize on points in transition. Hunt Conroy led all scorers with 16 points, with Robert McMahon and Will Hillery adding 9 and 6 respectively. The final score was 51-34.

These Blue Jay victories came after a slow offensive night in the opening game against John Curtis. The Jays shot just 27% from the field compared to 39% for Curtis. Strong offensive play by Malik Morgan of Curtis was too much for the Blue Jay defense in the 35-58 loss.

The Jays next face off against Harrison Central of Lyman, MS on Saturday, Nov. 26 at 5:30 PM.