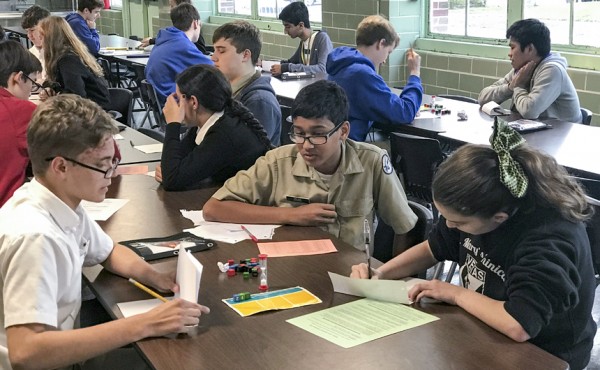 Propaganda is a language arts game through which players learn to recognize techniques of persuasion often used by advertisers, politicians, and editorial writers, as well as in everyday human interaction. Teammates spend a great deal of time studying together and exchanging notes as part of the learning experience. In actual play, a moderator reads one or more sentences, and players must decide which technique of propaganda is being used.

In this fall’s Equations play, Jesuit’s senior division tied for second with Rogers, Gravolet, and Tucker putting up points. In the junior division, sophomore Nicholas Cibilich joined Dowling, Webster, and Fugetta for a first place finish.

Equations is often referred to as the game of creative mathematics.  Although all grades follow the same set of rules, each division introduces increasingly more difficult mathematical concepts for the players to practice. Students are challenged to use their knowledge and ability to develop new skills in progressively more competitive ways. Because players learn from applying their knowledge in the heat of competition, they often score higher in their math classes.

The Academic Games Leagues of America is a nonprofit organization that encourages and conducts academic competitions at both local and national levels. Jesuit is a member of the New Orleans Academic Games League (NOAGL), which provides students the opportunity to compete with other area schools in games of mathematics, language arts, and social studies. NOAGL plays four of the six national games, including Propaganda and Equations in the fall. Jesuit maintains competitive teams for both a junior division (pre-freshmen through sophomores), as well as a senior division, which consists of 11th and 12th graders. Students who excel in the City League compete nationally during the second half of the school year.

Congratulations to all of Jesuit’s Academic Games competitors, and best of luck in spring play!