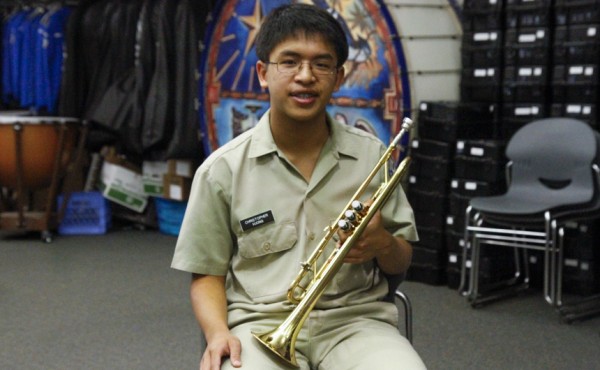 Sophomore Christopher Vuong is an all-state musician for the second consecutive year. The trumpeter won was one of four Blue Jays recognized as all-state in 2015 by the Louisiana Music Educators Association.

To qualify for all-state distinction, students auditioned first at the district level. Those who made it through district competition moved on to a second round of auditions, where finalists from all nine districts from around the state competed for all-state recognition. Students are required to play scales and prepared pieces of music. They are also asked to sight read, which involves receiving an unfamiliar piece of music, reviewing it for thirty seconds and then playing it for the judges.

All-state musicians come together for a November concert in Baton Rouge.

Jesuit band director Mr. Joe Caluda ’79 says Vuong, who participates in all three of the school’s bands — marching, jazz, and concert —  is special.

“We get our fair share of outstanding musicians at Jesuit and Christopher certainly fits into that group. He’s naturally gifted, focused, and dedicated,” Caluda said. “Given how young and talented he is, Christopher has a tremendous future ahead of him.”

Vuong is also a gifted pianist, lending his musical talents to school Masses.