Week 8: Six Touchdowns and a Field Goal Rocket Jesuit to a 44-0 Win Over Shaw 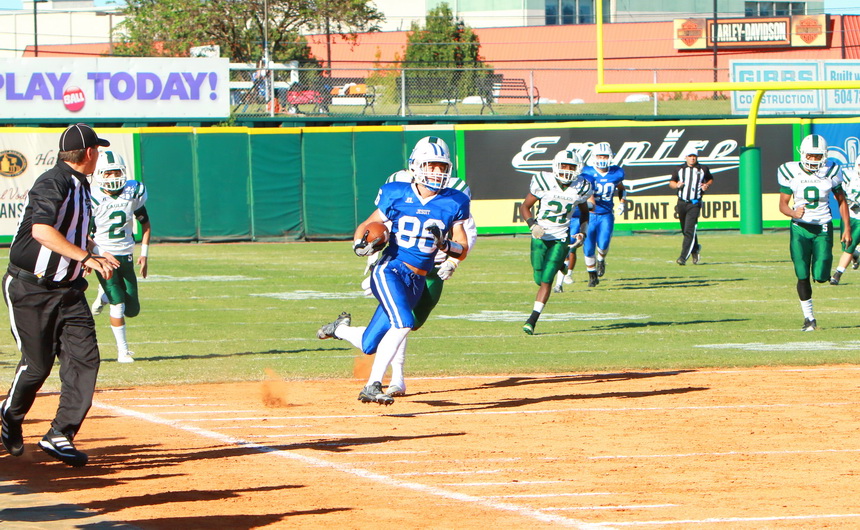 Bryce Musso catches a short pass and turns it into a 73-yard touchdown, his first of two against Shaw on Saturday, Oct. 22, at Zephyr Field.

Jesuit’s Next Opponent: Franklinton Demons (4-4; 2-1 district 8-4a)
When: Friday, October 28
Where: Tad Gormley Stadium
Kickoff: 7 PM
Admission Info: $6 pre-game tickets ($3 children ages 6-11) are available at Jesuit’s switchboard from 8 a.m. – 4 p.m., beginning Tuesday, Oct. 25 – Friday, Oct. 28. Tickets at the gate are one price: $8. Student IDs will NOT be accepted for this non-district game. Season passes will be accepted.
Parking at Gormley: $7 per car

Into the Lens: View the Jesuit – Shaw Photo Gallery

Three Blue Jays — wide receiver Bryce Musso and running backs Connor Prouet and Will Robinson IV — each scored a pair of touchdowns, while Jake Chanove added a field goal, to propel Jesuit to a 44-0 shutout against West Bank rival Archbishop Shaw on a blue-sky-football Saturday afternoon (October 22) at Zephyr Field on Airline Drive. 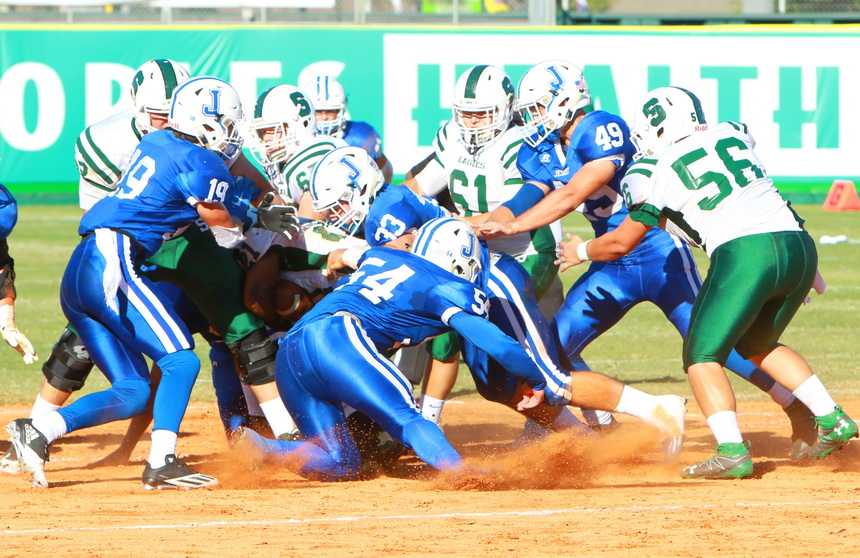 Blue Jays on defense swarm an Eagle runner around Shaw’s 35-yard line, or somewhere in the dirt between second and third bases on Zephyr Field.

The victory will be a memorable one for Coach Mark Songy’s Blue Jays for any number of reasons, including several that touch on the history of the series:

The victory improves Jesuit’s overall record to 4-4 (2-3 in district 9-5a). Jesuit’s next opponent, in Week 9, will be the Franklinton Demons, whose turn it is to cross the Causeway for a non-district date Friday night at Tad Gormley Stadium. Kickoff is at 7 p.m. After two consecutive losses in Weeks 6 and 7, the Demons evened their overall record to 4-4 after a 27-21 win against Lakeshore in Week 8.

When the Jays cranked up their offense against Shaw, they wasted little time putting points on the Zephyr scoreboard. In the first series, on third and 6 on their own 27, Jesuit quarterback Denny McGinnis assumed the shotgun position and called for the ball. It seemed that the entire Blue Jay line pulled towards the Shaw sideline, while McGinnis faked a handoff and rolled lazily towards the Jesuit sideline. The Eagle defenders mostly followed the crowd. Sitting pretty and wide open was wide receiver Bryce Musso, who caught a perfect pass a few yards beyond the line of scrimmage. Musso’s speed left his one defender behind as he raced 73 yards for Jesuit’s first touchdown with seven minutes remaining in the first quarter.

“It was energizing,” said Musso of that first touchdown, which will earn him and QB McGinnis a mention in the Jesuit football record book in the “Longest Pass Completions” section. “After I caught it, I really just saw green grass and tried to run as fast as I could. I knew the dude was behind me so I took an angle where I didn’t think anybody could catch me.” 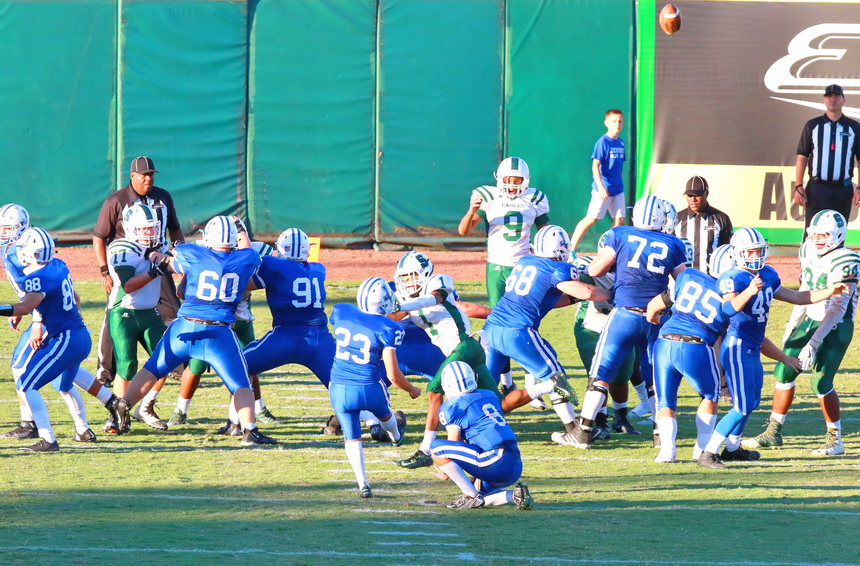 And no one did. On Jesuit’s next possession in the first quarter, Musso scored from 10 yards out after catching a short pass from McGinnis that looked similar to the play that resulted in the first touchdown.

“We went back to basics and just really wanted to get better this week,” said Musso after the game. “We performed how we did at practice… and came out on top.”

In the second quarter, running back Connor Prouet showed the Eagles why he’s so difficult to tackle. Prouet peeled off the yardage on several carries, always dragging with him two or three or more Eagle defenders. Prouet’s first touchdown was a two-yard burst over right tackle with 10 minutes left in the second quarter. With just over four minutes remaining in the first half, Prouet scored his second TD, a nine-yard run, to give the Jays a 28-0 lead.

In the second half, the Jays’ Will Robinson IV, a sophomore running back, scored two rushing touchdowns, the first an 18-yard jaunt up the middle in the third quarter. Robinson scored his second TD in the fourth quarter, a 41-yard sprint, again right up the Eagles’ guts.

Senior kicker Jake Chanove was perfect on four PATs and he knocked in a 26-yard field goal in the third quarter. Chanove also had a couple of nifty kickoffs, including an onside kick recovered by the Jays and a pooch kick fumbled but recovered by the Eagles. Junior kicker Christian McClure missed the PAT after Robinson’s first touchdown. The PAT after Robinson’s second touchdown was chipped in by sophomore kicker Max Scheurich. 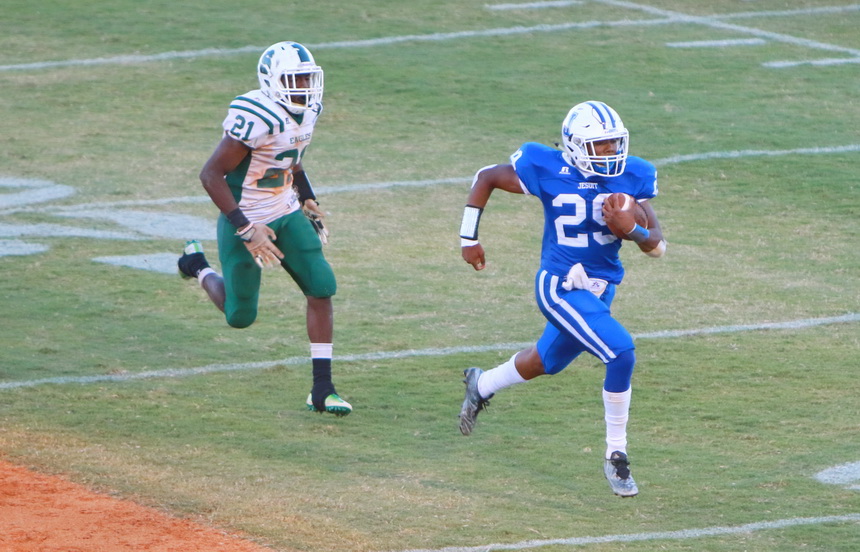 Will Robinson IV, a sophomore running back, is about to score the longest touchdown of his young prep career – a 41-yard run. His first touchdown in the game came in the third quarter from 18 yards out.

Try as Shaw did to score, Jesuit’s defense was impregnable. At the end of the first half, and as the seconds ticked off at the very end of the game, Shaw’s offense knocked loudly on the doorsteps of Jesuit’s goal line. But the Jays on defense were determined to keep their opponent scoreless.

“We wanted to come out and play a complete game and play well, and we really needed to have some success after the last couple of weeks which have been rough on us,” said Coach Songy. “Shaw’s a young football team and they fight, but our guys did what they were supposed to do…  We were able to spread it around a lot. We executed real well and took advantage of a lot of mistakes they made. It’s one of those things. I’m really proud of our effort. We started out the second half the right way, too.”

When a sports writer made the observation, correctly, that the Jays did not want to give up the shutout, Coach Songy readily agreed. “Sure, our guys take a lot of pride in that,” he said, adding that the assistant coaches had “made a big deal” out of the 38-0 shutout of Holy Cross. “We had our backup guys in there and gave a lot of them an opportunity to play.”

As for playing at Zephyr Stadium, Coach Songy said “it feels a lot better when you win. It was a comfortable setting on a nice afternoon. It was something I think our fans enjoyed, it was different for us.”