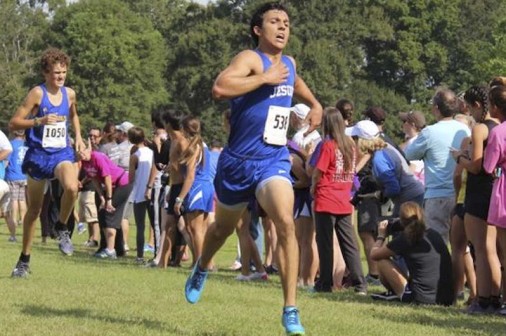 On the last Saturday in September, the Jesuit cross country team traveled to Pensacola, Florida, to compete against a deep and talented field of 36 teams from five different states.

On the first Saturday in October, the Jays stayed a little closer to home, but they got an even tougher test. Nine of Louisiana’s Top Ten teams showed up at Highland Park in Baton Rouge to compete in the St. Joseph’s Invitational, including top-ranked St. Paul’s, the odds-on favorite to win the Division 1 State championship in November.

Based on the results, Jesuit will have to close a significant gap in the next month and a half if they hope to bring home a third consecutive state championship. St. Paul’s ran away with the team title, posting an impressive score of 42 points (in cross country, the sum of the place in which a team’s top five runners finish is the team score, with 15 being the lowest possible tally). Four of the Wolves’ runners finished in the Top Ten. Another Division 1 rival, Catholic of Baton Rouge, finished in third place with 95 points. Jesuit took fifth place with 129.

Senior Reed Meric was the first Jesuit runner to cross the finish line of the three-mile course, taking 11th place with a time of 15:46. Seniors Eli Sisung (16:06), Tanner Tresca (16:15), John Kling (16:18), and Luke Malter (16:53) rounded out the Top Five. Juniors Jordan Tufts and Peter Carr also ran with the top-tier runners in the featured race.

Afterward, Coach Rudy Horvath ’86 was his usual optimistic self. “This was a good race for us,” he said. “There’s still a long way to go, but we have time.”

One of the reasons for Horvath’s optimism was the group he placed in the open race, which took place an hour after the main event. In that race, runners currently ranked 8-14 on the Jays’ depth chart competed. And they made some noise. Junior Michael Williams posted a time faster than Malter’s. And fellow junior Chris Ross posted a time that would have placed him among Jesuit’s top seven runners on the day.

“That’s what we need to see,” said Horvath. “It’s high time for some guys to start making my job easier. I don’t like making judgment calls about my seven-man roster for state. But I will if I have to. I’d much prefer, obviously, if the guys make my decision a no-brainer. There’s about a month left for that to happen. I need guys to step up and prove they can be trusted week in and week out.”

Earlier in the week, on Thursday, Sep. 29, Horvath sent out a wholly different group of runners to the Newman Invitational in Audubon Park. In that race, the Jays placed fifth. Senior Sam Recile finished in the Top 20 of the 182-man field to lead the Jays. Four other Blue Jays finished in the Top 40: senior Hayden Ricca; junior Brenner Rauch; and sophomores Michael Buisson and Scott McKeough.

Next up for Jesuit is the Country Day Cajun Classic on Saturday, Oct. 8 at City Park.