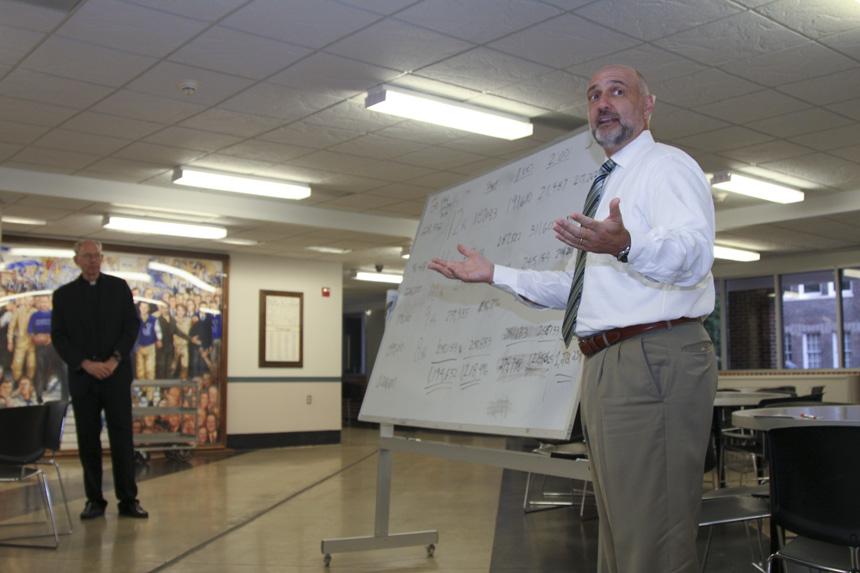 Parents’ Annual Giving drive chairman Rocky Daigle ’85 thanks the members of his leadership team for their work with the 2016-17 PAG drive.

Jesuit parents have pledged a record $1,283,000 to the annual giving drive that allows the school to remain an affordable school of excellence.

At morning assembly on Monday, Sept. 26, Fr. Anthony McGinn, S.J., thanked parents for embracing Jesuit’s commitment to affordability and for the role they play in making up the difference between what Jesuit charges for tuition and the actual cost of a Jesuit education. This year that difference is $2,877 per student.

Members of the PAG leadership team spent Sunday, Sept. 25 following up with parents who had yet to make their commitment to this year’s campaign. Prior to placing calls leaders joined more than a dozen past PAG chairs and their families for Mass in the Chapel of the Holy Name of Jesus.

Parents have until May 31, 2017, to fulfill their commitments. Parents who have yet to make their pledge are invited and encouraged to do so as soon as possible.

PLEDGE or DONATE to PAG.