In Catholic League Opener, A Bad Knight for the Blue Jays

Purple Knights Come from Behind to Humble the Jays, 27-23 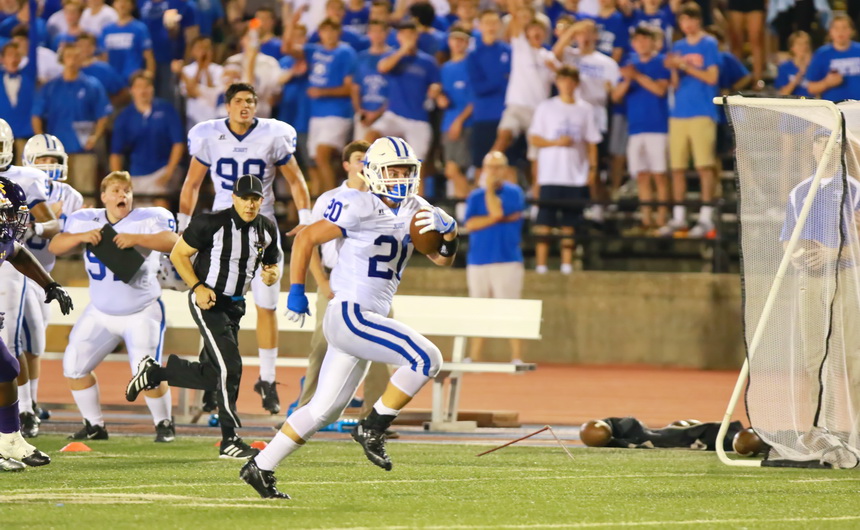 Connor Prouet runs down the sideline with his eyes on the end zone. But Prouet’s 35-yard sprint for a touchdown was called back because of a holding penalty. A few minutes later, Prouet did score, catching a screen pass from quarterback Alex Watermeier and racing 15 yards into the end zone.

Check Back for the Jesuit – St. Augustine Photo Gallery

Week 4 of prep football marked the start of district competition for all but one of the various teams that comprise the Catholic League: Archbishop Shaw, Brother Martin, Holy Cross, John Curtis, St. Augustine, and Jesuit. Archbishop Rummel had a bye. 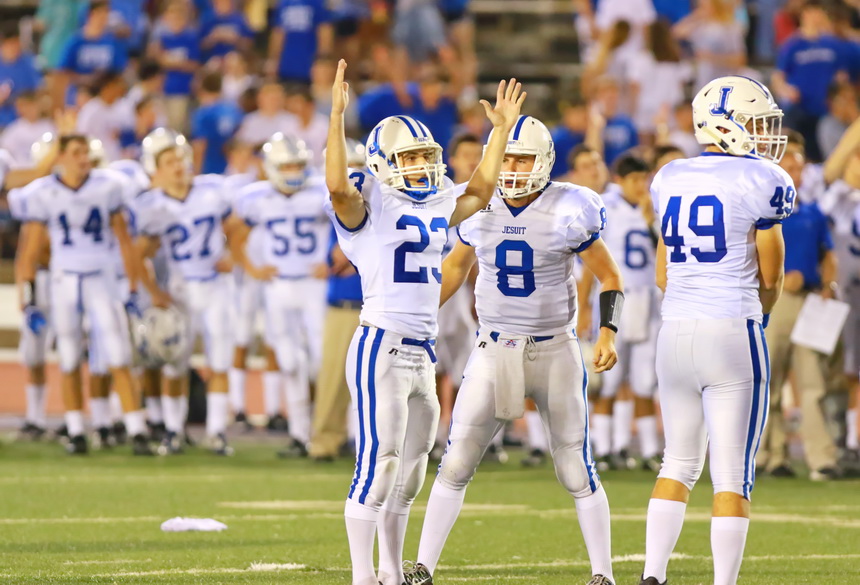 Jake Chanove kicked three field goals, including two for 42-yards. He watches as his first one sails over the uprights. Denny McGinnis (8) holds for Chanove and Chase Adamcewicz (49) is on the line blocking.

Holy Cross defeated Shaw, 33-7; Curtis beat Brother Martin, 26-9; and St. Augustine humbled Jesuit, 27-23. After jumping out to a 7-0 lead with a touchdown in the first quarter, the Purple Knights, winless in their first three games, yielded 17 points to the Blue Jays, all in the span of the final six minutes.

Jesuit quarterback Alex Watermeier flipped a screen pass to Connor Prouet, who sprinted down the Jesuit sideline some 35 yards. He stretched the ball across the goal just inside the pylon as he was shoved out of bounds. The play mirrored a similar one in the first quarter when Prouet ran some 35 yards untouched into the end zone for what looked like a great touchdown. A holding penalty negated the score and the Jays ended up punting.

The Jays’ second touchdown was set up by Prouet, who peeled off another 40 yards or so before being brought down on the 5-yard-line. Sophomore running back Will Robinson went off tackle and scored from five yards out to give the Jays their second TD. Senior kicker Jake Chanove hit both PATs. The Jays got the ball back before the end of the first half and with 20 seconds on the clock, Chanove booted the first of three field goals. He hit a 42-yard field goal to put a little more distance between the Jays and their opponent. The Jays went to the locker room at halftime with a 17-7 lead.

After four games, the Jays have scored 80 points while allowing 59 points. The offense has struggled to put points on the board and the third quarter has proved to be particularly nettlesome for the Jays and productive for their opponents. It’s as if the Jays emerge from the locker room with gremlins inside their helmets. 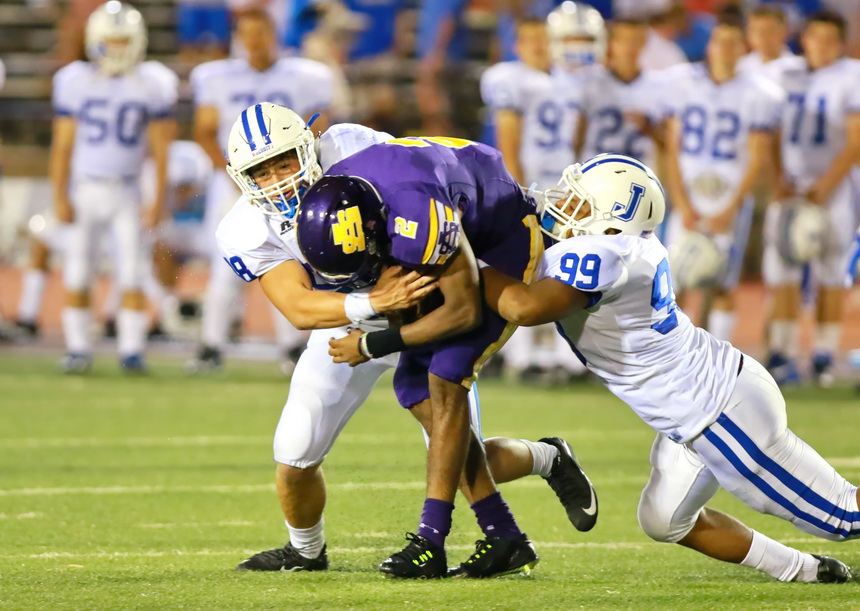 Jesuit went three and out in their first offensive series of the third quarter. St. Aug started near mid-field and were in the end zone in three plays, the Purple Knights’ quarterback throwing a 20-yard pass to a wide open receiver. The PAT was muffed, but St. Aug closed the gap to 17-13.

All the Jays could do in the second half was send Jake Chanove out on two occasions to kick field goals. He hit his second 42-yarder with about five minutes left in the third quarter, which increased the Jays’ lead, 20-13. But the next offensive series for the Purple Knights spelled disaster for the Jays’ defense. In the space of one minute, St. Aug’s quarterback tossed a bomb that covered 80 yards and the sophomore running back who caught it scored standing up. This time, the PAT was good and the two rivals were tied, 20-20.

The penalties against Jesuit were particularly onerous. With three seconds remaining in the third quarter, Watermeier hit sophomore wide receiver Elijah Morgan with a touchdown pass. But the play was negated by a holding penalty against Jesuit, the second time a TD was called back because of a holding infraction.

The Jays settled for Chanove’s third field goal, a 29-yarder five seconds into the fourth quarter to take a slim 23-20 lead.

Jesuit’s three-point lead held up for about four minutes. St. Aug put together a drive that ended with a 17-yard touchdown run by the quarterback. With the PAT, the Purple Knights sat on a four-point lead. 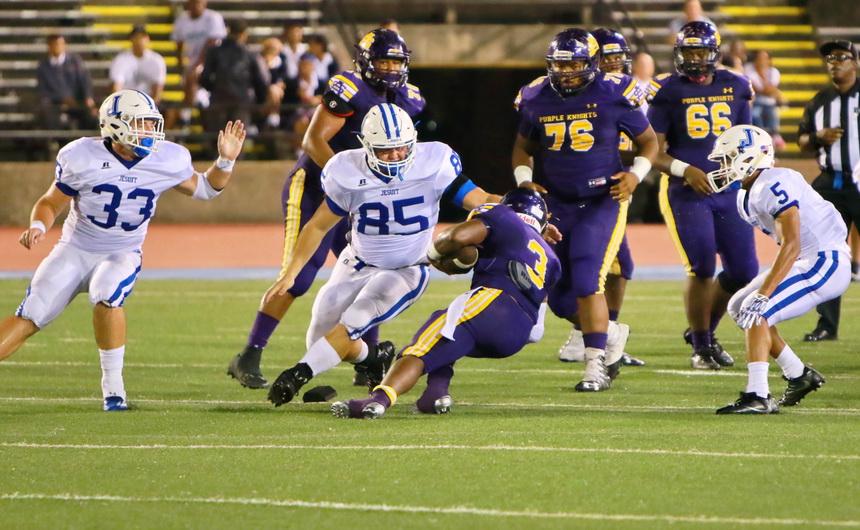 Early in the third quarter, St. Aug scores a touchdown to close the gap to 17-13. The extra point attempt was muffed by the holder (3), who scrambles unsuccessfully to elude Nathan Farley (33), Josh Sauviac (85), and Michael Hull (5).

The Jays had two final opportunities with about 90 seconds remaining

in the game. Just inside the red zone, Watermeier took the snap and rolled left towards the St. Aug side. He threw to Connor Prouet on the 12-yard line and the senior barely made it into the end zone for a touchdown. The line judge on Jesuit’s sideline had thrown a flag as soon as Watermeier released the ball. The quarterback had crossed the line of scrimmage before throwing to Prouet. The touchdown was negated, the third score erased by a penalty.

The final opportunity came on fourth and 11 yards with about one minute remaining. The ball was on the 20-yard line when Watermeier dropped back and tossed a pass to wide receiver Ashton Loria, who was two yards in front the end zone and closely guarded by two defensive backs. Loria got a hand on the ball, but it skittered out of bounds. If there was interference on the play, there was no flag. St. Aug then kneeled to run the clock out. 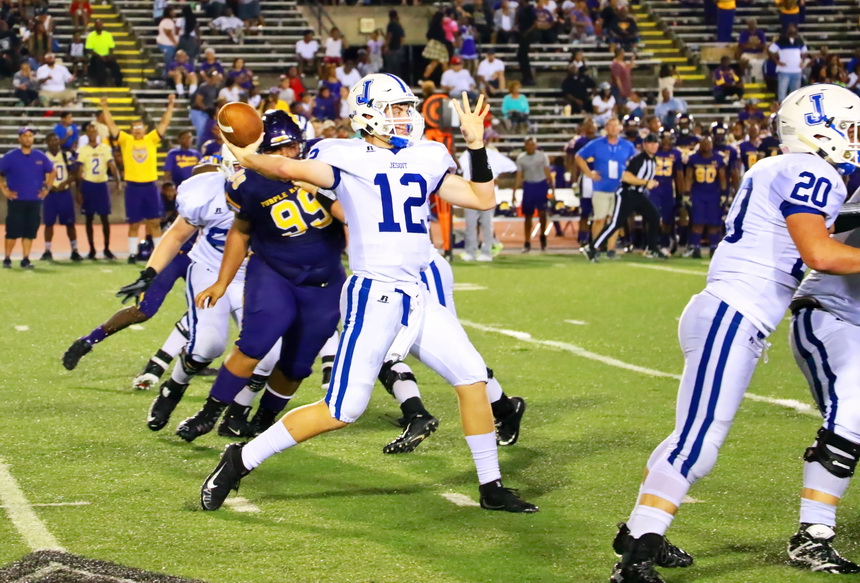 That the Jays lacked “a sense of urgency” playing St. Aug was something that keenly disappointed Coach Mark Songy.

“We walked around like we were in a fog,” he said. “Everybody was in a fog, even our defense was in a fog, just at different times. We didn’t hold our blocks long enough. We didn’t make some critical throws when we had to make them. We didn’t do a good job of executing on offense when we really needed the plays tonight.”

Coach Songy readily agreed that St. Aug had the momentum for most of the second half. “Absolutely, at times we needed to slow them down and make plays. They made plays, we didn’t. It was really that simple.”

Going into next week’s Rivalry game against Holy Cross, what will the Blue Jays (2-2 overall; 0-1 district) learn from a loss like this?

“We really need to improve on our sense of urgency,” said Coach Songy. “Our sense of urgency was not where we needed it to be tonight if we’re going to play in this league. St. Aug is an explosive football team, a good football team, and I’ve been talking about it forever to everybody who will listen. They are getting better every week. We did not help ourselves by not having a sense of urgency and letting it get to the point where it was. We were up 17-7 at halftime and we came out with the idea of pulling ahead early in the second half. Instead, we stunk the place up on our first possession.”

Three yellow flags tossed at the Jays were huge and negated three touchdowns.

“Penalties hurt, they hurt all the time,” said Coach Songy. “You can’t make penalties, they’re the same thing as critical mistakes. They’re just like turnovers, you can’t have them. We had a nice drive going in the fourth quarter. We got a holding call and had to punt the ball away. The team that makes the fewest number of mistakes wins. It’s been like that forever and it’s never going to change. If you’re going to make mistakes, you have to overcome them. We were not able to overcome them.