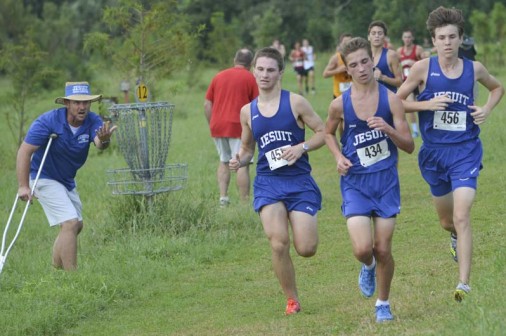 Jesuit’s cross country team kicked off the season in style, weathering stifling heat to capture the team championship in the Mount Carmel Academy Cub Run on Saturday, Sep. 10 despite holding out their top ten runners.

Jesuit placed five of its 16 entries in the Top Ten to edge second-place Belle Chasse, scoring 28 points to the Cardinals’ 31 (in cross country, the sum of a team’s top five finishes is the team total, with the lowest overall score winning the meet).

Cross country aficionados paying really close attention to the minutiae of this article may have already done some quick math and noticed that Jesuit’s team total seems to be inaccurate based on the above information. But two Rummel runners finished in the Top Ten. Since Rummel did not field a large enough squad to compete for the team title, everyone else had their finish bumped up accordingly to compute the team totals. Tufts, therefore, got credit for a second place, while Jesuit’s other four scorers were credited with 5th, 6th, 7th and 8th-place finishes.

“I liked what I saw today,” said Coach Rudy Horvath, who didn’t let his post-ACL  surgery crutch prevent him from getting around the course to cheer on his charges. “The times weren’t too hot, but that’s because the weather was. Given the conditions, the guys ran exceptionally well.”

Jesuit returns to the City Park course for the second straight week to compete in the Rummel-Chapelle Invitational on Saturday, Sep. 17.