Jays Won’t Be Dancing with Wolves

Jesuit Travels to St. Paul’s to Take on a Familiar Foe in the Wolves 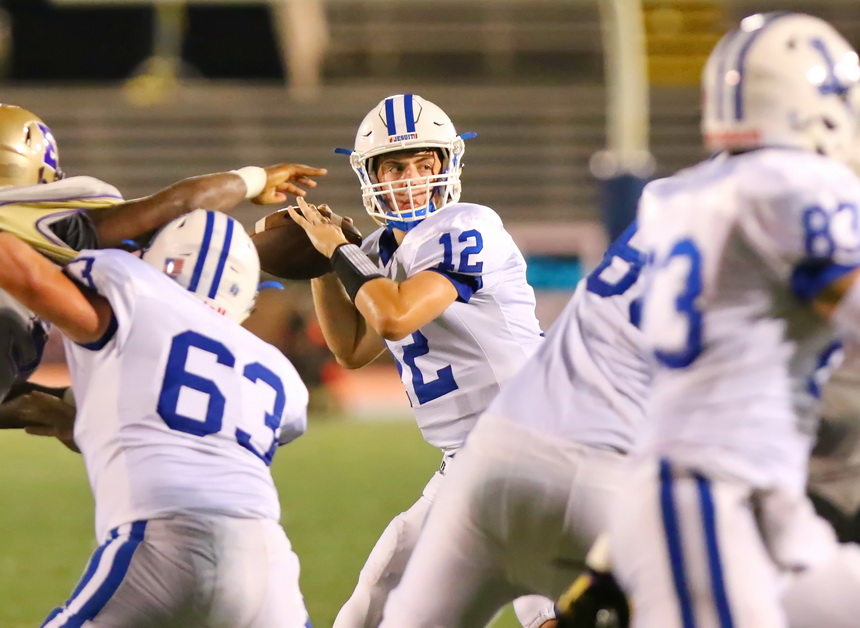 Week 2 of the 2016 football season has the Blue Jays crossing the Causeway to invade a den of Wolves, as in St. Paul’s of Covington. Kickoff is Friday, September 9, at 7 p.m. at Hunter Stadium on the campus of St. Paul’s. 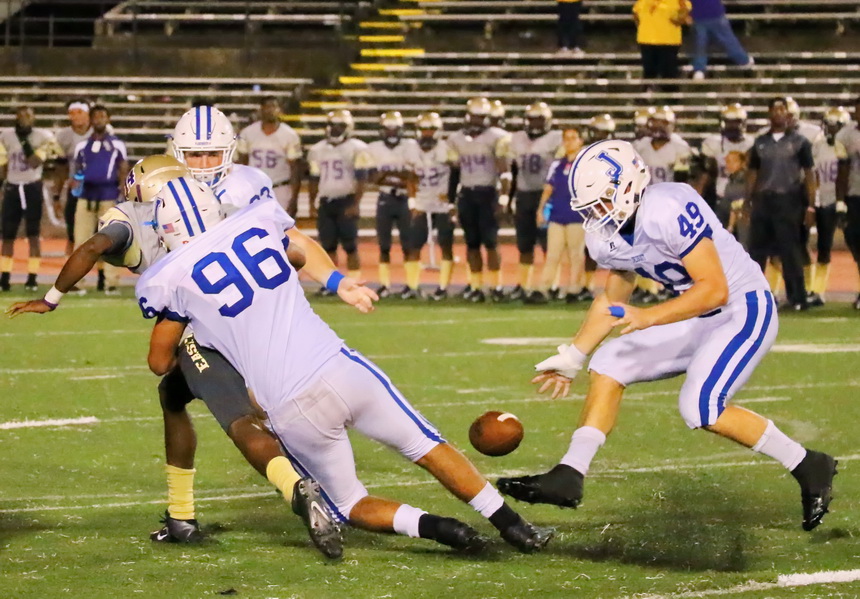 Defensive end Matthew Frischhertz (96) clobbers the Easton quarterback, forcing a fumble that the Jays recover. Jesuit’s defense will have to pressure the Wolves all night long.

This non-district game will be the seventh time that the Jays and Wolves play each other in a rivalry that was renewed only two years ago. In 2014, the Jays thrashed the Wolves, 49-22, and went on to win the state championship in Division 1. In 2015, St. Paul’s visited Tad Gormley Stadium, where the Jays had a “howling good time.” Prior to these two wins by Jesuit, St. Paul’s led the series, 4-0. View the 2015 Jesuit – St. Paul’s Game Photo Gallery

The Jays (1-0) are coming off an impressive defensive performance against Warren Easton in last week’s season opener at Gormley, which Jesuit won, 13-6. Last week, St. Paul’s (0-1) dropped its season opener to the Karr Cougars, 35-28, and are looking to bounce back at Jesuit’s expense.

For the Jays to return home with a win, Coach Mark Songy needs Jesuit’s offense to get rolling and put up some touchdowns on the scoreboard. Against Warren Easton, the Jays scored an early touchdown, their only one, on a 2-yard plunge by senior running back Connor Prouet. The extra point, plus two field goals (29 and 26 yards) by Jake Chanove, gave the Jays their 13 points. Junior quarterback Alex Watermeier completed only four of 13 passes for 52 yards, and he was intercepted once, in last week’s opener. Watermeier is a much better passer than those stats reveal. 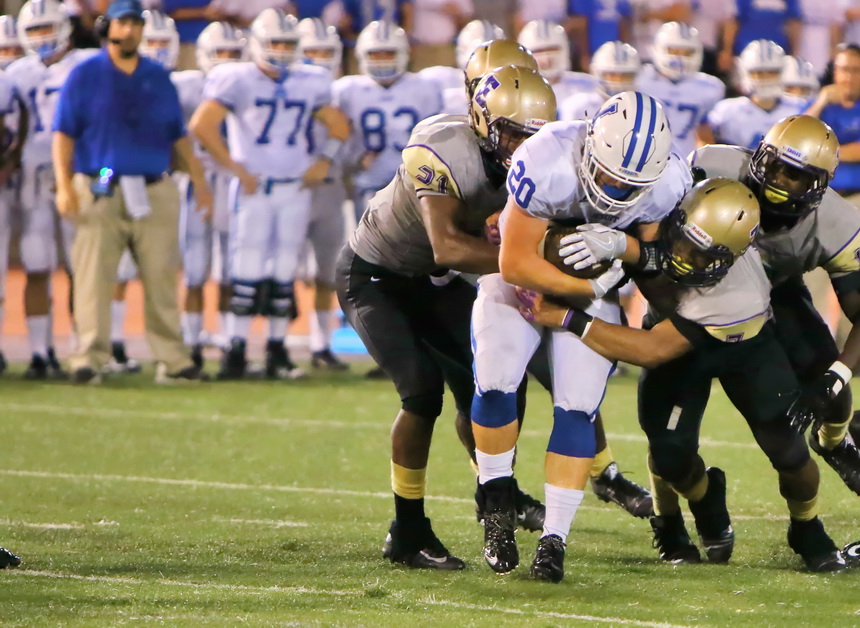 Senior running back Connor Prouet is not easy to bring down, as these four Eagle defenders can attest to.

St. Paul’s has a high-scoring offense and this will make it much tougher for Jesuit’s defense, which against Easton, forced at least five turnovers. Jesuit’s defensive line will have to pressure the Wolves’ quarterback, a scrambler, and force him out of his comfort zone.

Pre-game ticket prices are $6 each for adults, students, and children. Tickets purchased at Hunter Stadium are $8 each. Pre-game tickets are available for purchase at Jesuit’s switchboard Thursday and Friday, from 8 a.m. – 4 p.m., and on Friday during lunch in the Student Commons.

Student IDs and passes will not be accepted at the gate for this non-district contest. Blue Jay fans who plan to attend should consider buying the pre-game tickets at Jesuit’s switchboard (Banks Street entrance under the blue awning). Proceeds from tickets sold at Jesuit will benefit the Blue Jays. All revenue from tickets sold at St. Paul’s gate will be retained by the Wolves.

The game will air on 98.9 FM radio, but listeners will need to be in close proximity as the signal does not reach New Orleans. However, the audio of the game will be streamed live on St. Paul’s Radio Network.

The New Orleans Advocate: St. Paul’s must ‘clean up’ turnovers against Jesuit