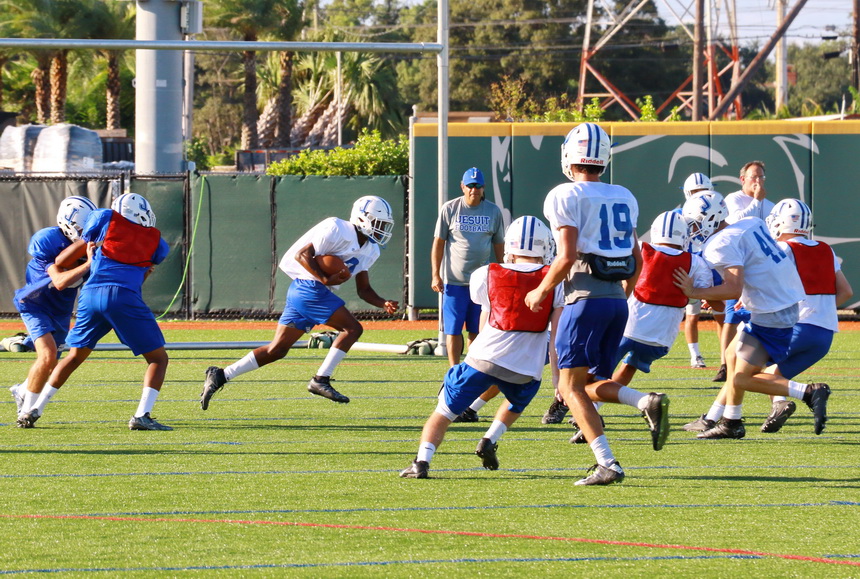 A kickoff drill has senior Jandon Briscoe carrying the ball.

The Blue Jays were practicing hard under a sweltering sun late Tuesday afternoon at John Ryan Stadium in preparation for their 2016 season opener on Thursday, September 1, against their old Mid-City rival, the Eagles of Warren Easton.

Kickoff is 7 p.m. at Tad Gormley Stadium with the Blue Jays occupying the visitors’ side of the field along Roosevelt Mall. Pre-game tickets are $6 each for adults, students, and children.  All tickets purchased at the stadium are $8 each. Pre-game tickets will be sold at the Jesuit switchboard (blue awning entrance on Banks Street) on Wednesday and Thursday from 8 a.m. – 4 p.m., as well as in the Student Commons during lunch on Thursday.  Student IDs and season passes will not be accepted at the gate for this non-district game. 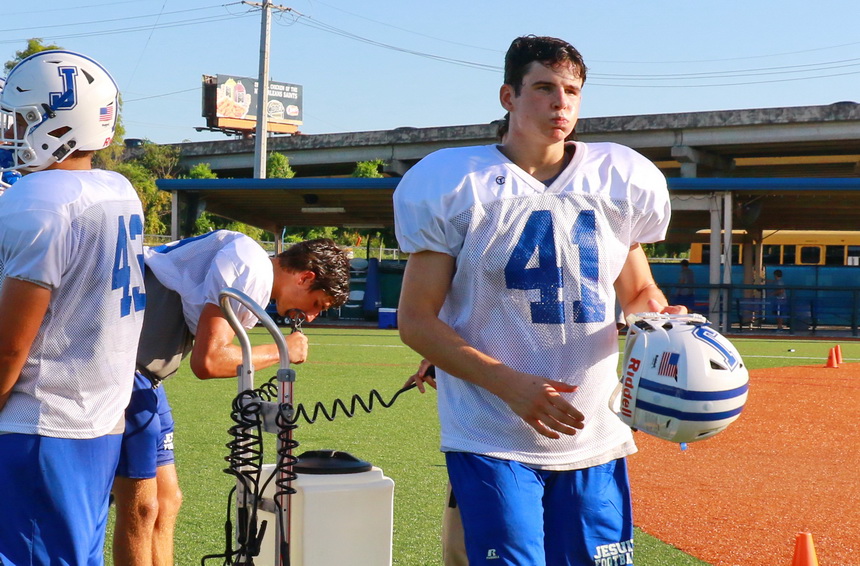 For senior defensive back Matt McMahon (41) and other Blue Jays, the popular water machines were essential to staying hydrated.

Last year’s 26-21 loss to the Eagles remains fresh in the minds of Jesuit coaches and those Blue Jays who were on the 2015 team. Just listening to Coach Mark Songy talk about last year’s game makes one wince.

“We’ve been watching that game all week,” he said. “Easton returned the opening kickoff for a touchdown. Then we made a mistake near the end of the first half after we went ahead of them. It was a really stupid penalty that gave Easton the ball back in scoring distance with less than a minute to play in the first half. They jumped out in front of us, and that was it. So we don’t want to play behind these guys again.”

The rivalry between the Jays and the Eagles is an old one, going back some 102 years. The teams played each other a few times prior to 1914 but the results were not officially recorded. The Blue Jays lead the series 24-20-4. Since 1960, the teams have played each other only five times, and that includes last year’s season opener, which was the first meeting of the rivals since a playoff game in 1992, which Jesuit won 35-6.

According to Coach Songy, the scouting report on the Eagles is not much different from last year’s.

“They are a very, very talented team, the kind of team that expects to win,” he said. “They’ve had success, they’re very well coached, and they run the ball really well. They understand who they are and they’re doing the things they do best. We’re not a very good match-up with those guys because they spread you out and they’re very fast.” 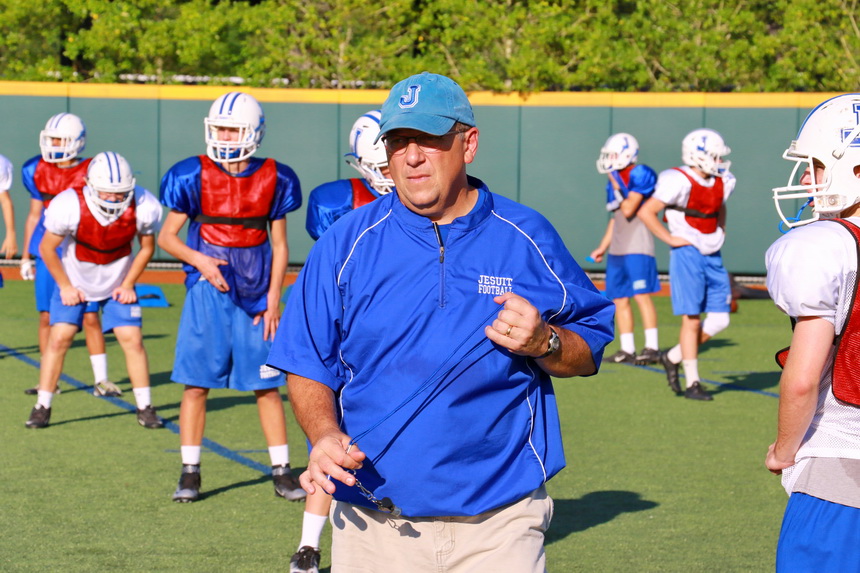 Coach Mark Songy had the Blue Jays practicing kickoffs in the final 30 minutes of Tuesday’s practice at John Ryan Stadium.

Coach Songy said the Blue Jays have been practicing hard but “we should be farther along than we are right now.”

Other than senior running back Kai Rozas, who will miss the first few games of the season as a result of a sprained ankle that happened in the final minute of the first half of the Hahnville Jamboree, the Jays are healthy and ready.  But a jamboree is a jamboree, even if the Jays were on the winning end of a 21-14 score.

“We’re psyched to finally play a game that means something,” said Coach Songy as he hopped aboard one of the three Jesuit buses that ferried the 103 Blue Jay players back to Carrollton and Banks.

The New Orleans Advocate: Louisiana high school football is back! Everything you need to know about 2016 New Orleans-area teams