In support of Blue Jay Football’s season opener against Warren Easton that evening, students sported their best blue and white on the fourth day of Welcome Week. At lunchtime, intense rounds of Four Square got students in the competitive spirit. Later in the afternoon, a pep rally rocked the gym as a team of Pokémon trainers — and none other than Jayson himself — finally vanquished Pikachu and reclaimed the stolen spirit torch. 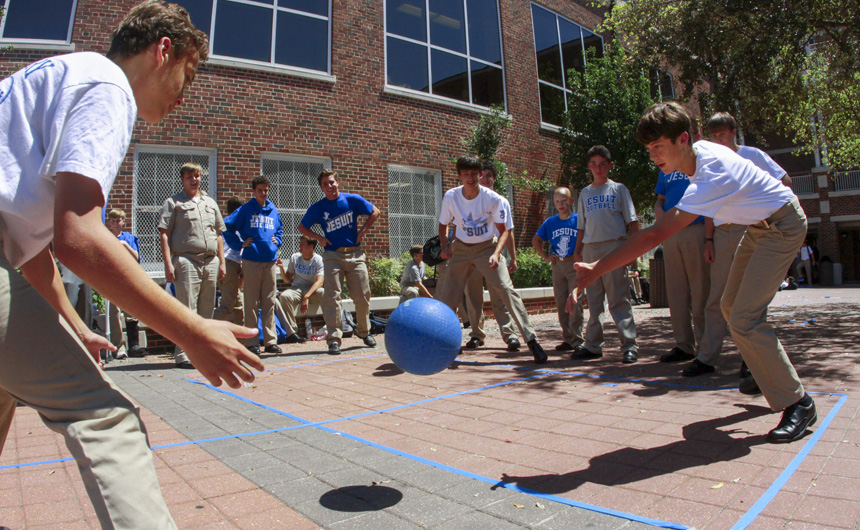 Students play a competitive game of Four Square at lunch and channel their Blue Jay spirit.

On the second day of Pokémon training, students worked on their speed and agility by racing through an inflatable obstacle course. Pikachu made many appearances throughout the event seeking to thwart their training and maintain possession of the Blue Jay spirit torch. In addition to the serious business of re-capturing the spirit torch, students of all grade levels made sure to have a great time bouncing through the inflatable.

The students’ first test: paint jousting, which led the week-long series of lunchtime activities in Traditions Courtyard. Trainers organized match ups, and students – armed with paint filled rollers – battled atop the event platform, each competing to walk away with the least amount of color on their coveralls.

At Morning Assembly, Rev. Kevin Dyer, S.J., introduced International Olympic Committee Chairman (and Student Body President) William Fine, who welcomed fellow classmates to the games. However, just as Chairman Fine lit the ceremonial spirit torch, Jays stood by helplessly as Pikachu rushed the stage and stole it, making off into the crowd of students, faculty, and staff. Led by Senior Class President Jacob Marshall, a team of Pokémon trainers pursued, but wily Pikachu managed to elude capture. Luckily, a wise wizard (played by beloved math teacher Jo Ann Schexnayder) appeared and advised the group on the skills they would need to master in order to reclaim the spirit torch, including throwing accuracy, speed, agility, and one-on-one trainer battles.