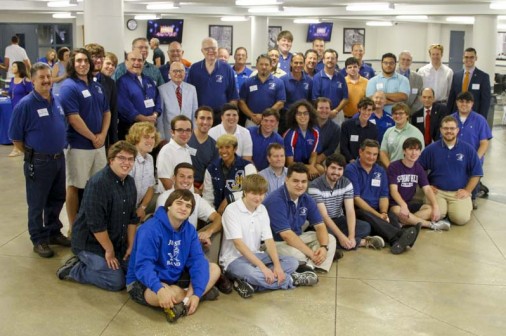 Fifty band alumni stretching from 1948 to 2016 reconnected with today’s music program by attending Mass, having dinner together in the Student Commons, and enjoying a mini concert in the auditorium.

Blue Jay band alumni from 1948 to 2016 returned to Carrollton and Banks on Saturday, August 13, for the inaugural Blue Jay Band Homecoming. Nearly 50 Blue Jay alumni and their families returned to campus to connect with each other and the Blue Jay bandsmen of 2017.

The event began with Mass in the Chapel of the North American Martyrs celebrated by Jesuit president Fr. Anthony McGinn, S.J. ’66, who welcomed the former bandsmen and thanked the band community of students, band directors, and parents for their enhancement of life at Jesuit. Mass ended with the playing of the Alma Mater by the Alumni Band, led by Dave Schof ’56 and conducted by current band director Mr. Joe Caluda ’79. Following dismissal, the alumni Jays waxed nostalgic thanks to the Alumni Band’s playing of the Fight Song outside of the chapel and a side trip to the band room as they made their way to the Student Commons for a festive reception. There, joined by the common bond of band membership, the Jays of today and the past shared stories of memorable – and not so memorable – band performances. A special treat was the appearance of former band directors Karl Hymel, B.J. Perez, and Brenda Castillo.  All enjoyed refreshments and jambalaya compliments of Jesuit’s advancement office and gumbo and red beans and rice, a generous donation of Copeland’s Restaurant. Thanks to the good work of band booster leaders Roger Jordan and Doug Schof, band parents assisted with food prep and service. Before heading to the auditorium for a mini-concert by today’s Jays, guests heard from advancement director Tom Bagwill, alumni director Mat Grau ’68, band director Joe Caluda ’79, band drum major William Fine ’17, and band alumni reps Dave Schof ’56 and David White ’83.