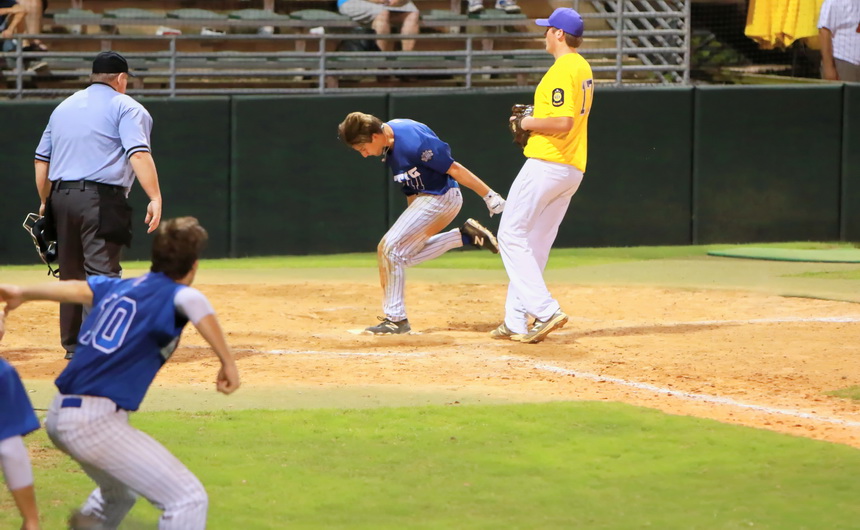 Bryce Musso turned a triple into the game-winning run when the throw to home plate was way off the mark. The error allowed Musso to cross home plate with the winning run in the bottom of the ninth inning.

After seven innings, Retif Oil nursed a comfortable 6-3 lead over the St. Landry Bank Indians in Saturday’s opening game for both teams in the American Legion’s State Tournament.

But in the top of the eighth inning, the Oilers imploded, committing back-to-back errors that allowed three Indians to cross home and tie the game, 6-6.

Could the Oilers pull off a win without heading into extra innings? No problem! 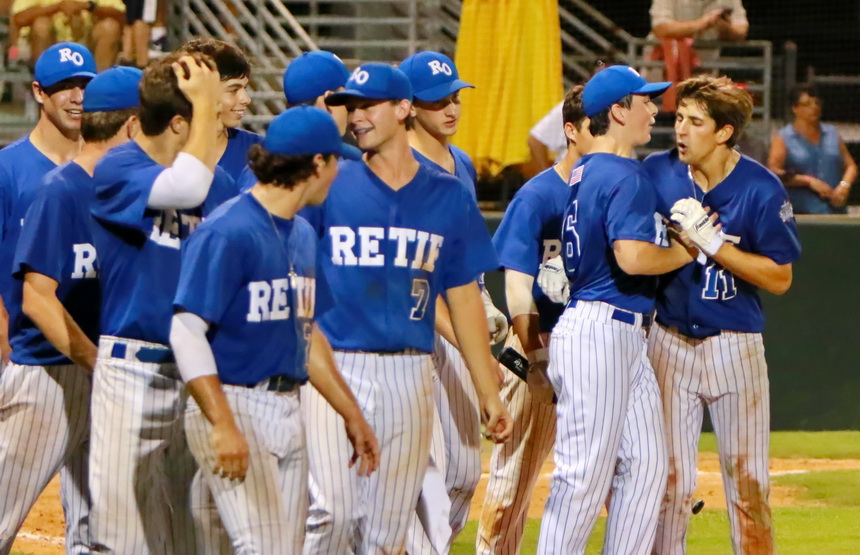 Bryce Musso is congratulated by Christian Hess, who pitched the last two innings in relief. Hess got the win to improve his record to 5-0.

Retif’s leadoff batter, center fielder Bryce Musso, had a 2-1 count when a fastball came right down the alley. Musso connected and the ball sailed way over the Indians’ center fielder, who chased it all the way to the fence. It was an easy triple for Musso, but the relay throw from second base to home was way off and almost left Kirsch-Rooney Stadium. That’s when Musso extended his triple and scored standing up, delivering a 7-6 walk-off win for the Oilers.

Retif’s win pairs them against Otto Candies (Hahnville), which earlier on Saturday defeated Chalmette-based Gulf Coast Bank 29ers. Retif and Otto Candies will take the field Sunday, July 24, 30 minutes after the conclusion of the Ponstein’s-Pedal Valves Cardinals game, which starts at 3:30 p.m. The double elimination tournament is being played at Kirsch-Rooney Stadium and, weather permitting, is scheduled to end Wednesday, July 27.

Retif Oil racked up 12 hits versus nine for St. Landry Bank in a lengthy game that had a total of seven errors – three for Retif and four for the Indians. And that was the official scorer feeling rather generous.

Andrew Cashman started for Retif and pitched seven innings. He gave up three runs and struck out three batters. He was relieved by Christian Hess, who watched helplessly as the Indians tied the game with their three runs – all unearned – in the eighth. Hess got the win to improve his Legion record to 5-0.

After the game, Coach Joey Latino’s blood pressure returned to almost normal. “You never know in tournament play what you’re going to get,” he said before boarding the bus to take the team back to Carrollton and Banks. “I’d have to search Google for the right words to describe our play tonight. But in the end, you take the 7-6 win, put it behind you, and move on to the winner’s bracket.”

View the Brackets for the State Tournament