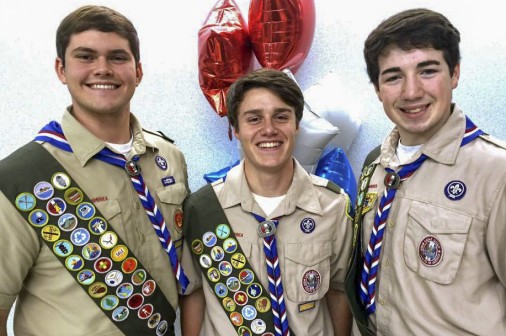 The Blue Jays who earned the ranking are all members of Boy Scout Troop 230: Thomas James Hellmers, son of Stephanie and Carl Hellmers; Jarod David Larriviere, son of Alison and Jerry Larriviere; and Daniel Glynn Leithman, son of Madeleine and Robert Leithman.

Service work performed while working toward the rank of Eagle Scout allowed these Blue Jays to put into practice Jesuit’s motto of being “Men for Others” in the larger community outside school.

For his Eagle Scout project, Hellmers, a member of the Class of 2016, built a new garden by the statue of the Blessed Mother at St. Catherine of Siena. He removed old palm trees and holly bushes and replaced them with a new garden and mulch as a backdrop for the statue. He plans to major in musical theater at Catholic University in Washington, DC.

The Eagle Scout award is a performance-based achievement earned by members of the Boy Scouts of America. To earn the Eagle Scout rank, the highest advancement rank in Scouting, a Boy Scout must fulfill requirements in the areas of leadership, service, and outdoor skills. Although many options are available to demonstrate proficiency in these areas, a number of specific skills are required to advance through the ranks. Since 1912 more than 2.25 million — just four percent of all Boy Scouts — have earned the rank. Famous Eagle Scouts include Neil Armstrong, Bill Gates, and Steven Spielberg, among others.