Retif Oil and Peake BMW Battle 9 Innings, Run Out of Time, Settle for a 1-1 Tie 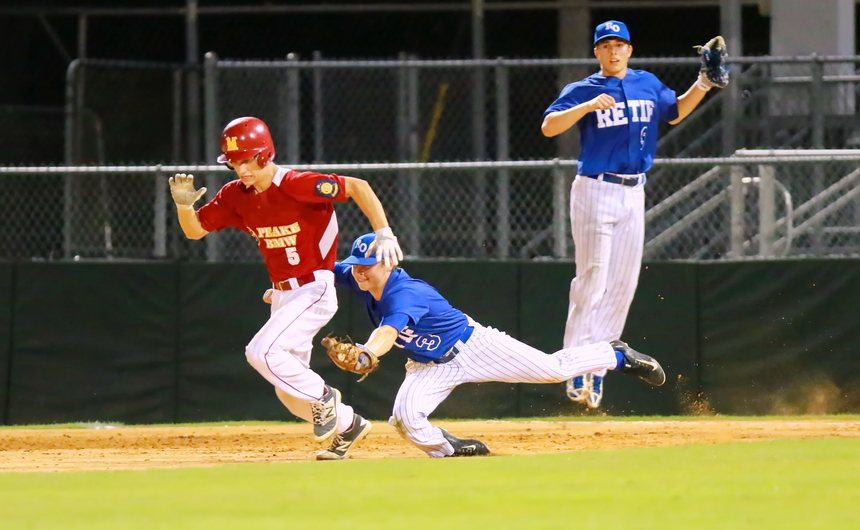 Second baseman Marc Theberge lunges to tag this Peake BMW runner who was caught between first and second bases in Monday night’s game at Kirsch-Rooney Stadium. First baseman Grant Saunders leaps as Theberge makes the play, one which saved a run while also ending the inning.

Retif Oil put up one run in the first inning and tried to hold on to its one-run lead over Brother Martin-based Peake BMW in Monday night’s feature American Legion game at Kirsch-Rooney Stadium.

Peake tied the game in the sixth inning and after seven regulation innings, the two teams battled two extra innings. After Retif batted in the bottom of the ninth, the whistle blew on the two-hour and 15 minute time limit set for Legion games. Both teams shook hands and called it a tie game. 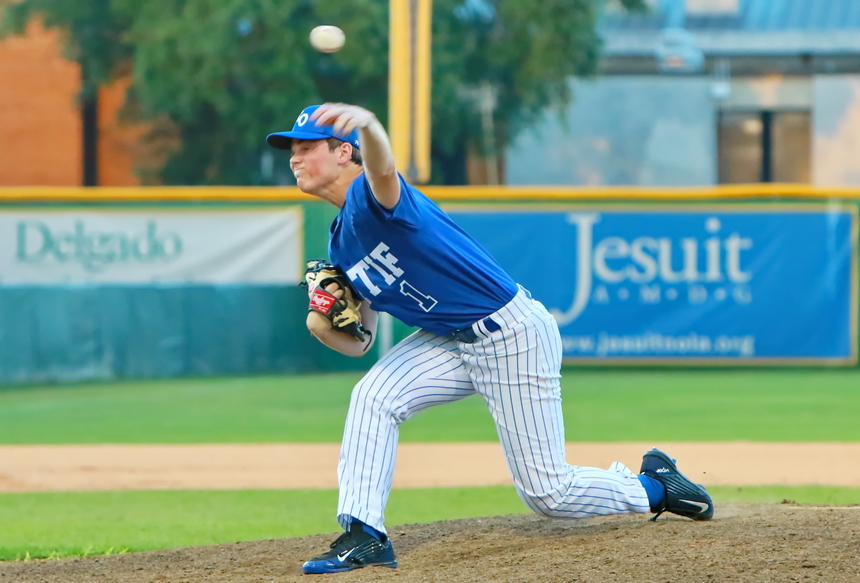 Davis Martin started on the mound for Retif and was relieved after five shutout innings by Andrew Cashman. Martin allowed only one hit, walked a batter, and struck out seven. He plunked a pair of Peake batters, the only blemishes on his solid performance.

Both teams had opportunities to post runs, but the offensive threats were either snuffed or imploded.

Davis Martin, a lefty, started for Retif and pitched five innings, giving up one hit, walking one, and striking out seven batters. Martin’s otherwise solid performance was marred only by two Peake batters who were plunked by wayward pitches. Martin was relieved by Andrew Cashman, a rising junior who throws right-handed. Cashman pitched the remaining four innings, giving up Peake’s only run on four hits. He walked two batters and struck out one.

Retif brings a 6-1-1 record to Wednesday night’s game against Ponstein’s. On Tuesday, June 7, Retif played De La Salle at John Ryan Stadium in a game that was inserted into the Legion schedule at the last minute. After seven innings and no score, the game went into extra innings. But Retif needed just one extra inning to pull out a 1-0 walk-off victory in the bottom of the eighth. Alex Watermeier doubled and scored on Tripp Ledet’s single up the middle. Retif’s Zack Smith pitched a complete eight inning shutout

As a team, Retif is batting.233, and while the summer is young, for the sake of comparison, the 2015  Oilers finished with a team batting average of .288.