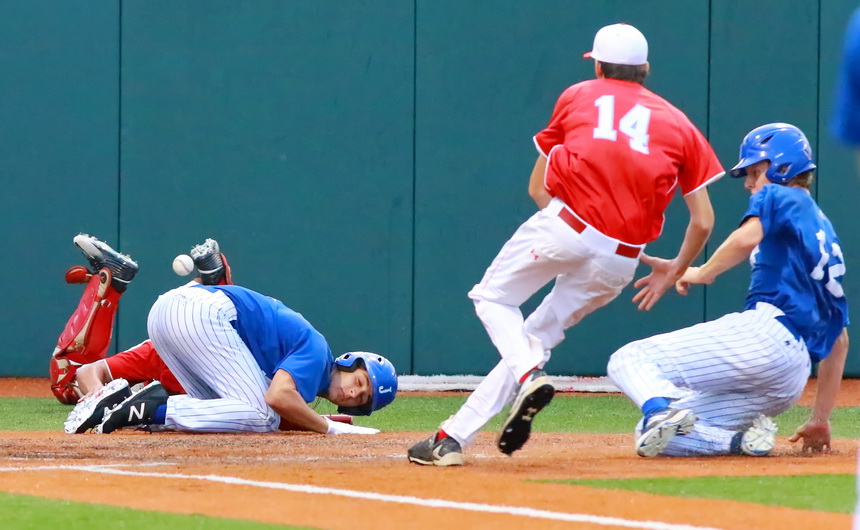 On a wild pitch, Grant Saunders (12) comes sliding home as Bryce Musso, who was at bat, ducks to avoid interfering with the play at home. Saunders was safe. Retif defeated Rummel-based Deanie’s, 8-1.

One of the favorite pastimes of prep sports fans during the oppressively hot and muggy summer months in New Orleans is American Legion baseball, which has been around for 85-plus years. 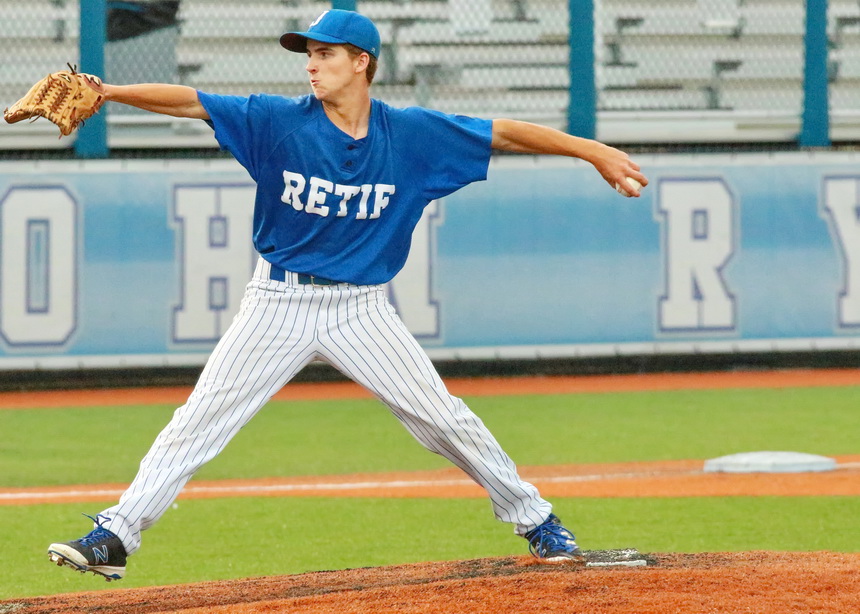 Zack Smith pitched two innings against Deanie’s and allowed one hit. He picked up his first win of the season.

Retif’s first blemish of the young season occurred Sunday as the First District Invitational Tournament was winding down at John Ryan Stadium. The Delhomme Drillers from Lafayette shut out Retif, 3-0, in the final game of the rain-plagued tourney. Retif had been scheduled to play three tourney games at the Ryan, with the first on Friday night against Houma Pelican Waste. Retif gave up a run in the first inning but in the bottom of the third, scored four runs to take a 4-1 lead. Heavy rain with lightning cleared the field as Retif batted in the bottom of the fourth. The game was canceled. (Legion rules require teams to complete four and a half innings for the game to count if canceled by weather.)

Retif next hosted the Gulf Coast Bank 29ers in what turned out to be a bifurcated game, half of which was played Saturday night with the remainder completed Sunday morning.

From Thursday, June 9 through Tuesday, June 14, Retif plays six games at John Ryan Stadium, including four weekend games (Friday-Sunday) that will be part of the Jesuit-Destrehan-Hahnville Invitational Tournament. 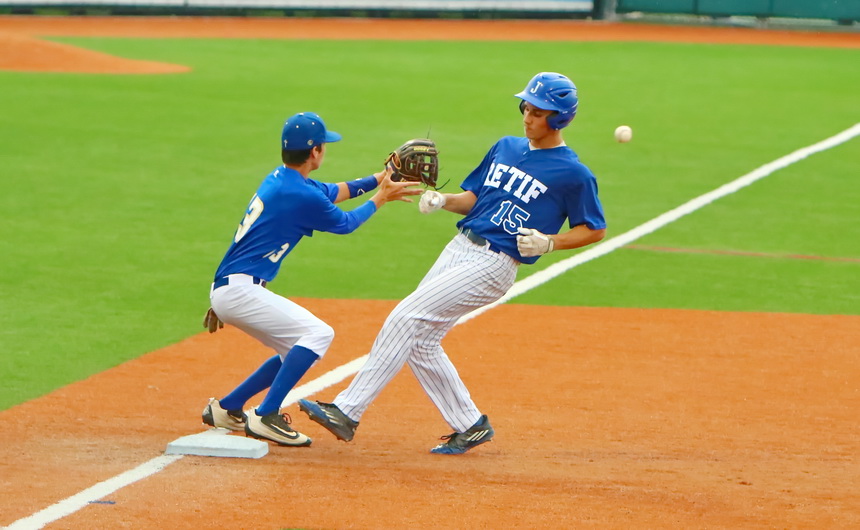 Stephen Sepcich hits a stand-up triple against Houma Pelican Waste in a game that was canceled by severe weather after three and a half innings.

Coach Latino is in his sixth year as Jesuit’s head baseball coach. Once prep season is over, Coach Latino starts assembling Jesuit’s American Legion team, which has been sponsored for the past 25 years by Retif Oil & Fuel, a family-operated business on the West Bank that supplies gasoline and petroleum products to service stations all over the region. Jesuit alumnus Milton Retif ’51 founded the company and his son Kenny (Class of 1976) oversees its operations today. Both alumni are devoted to Jesuit, Blue Jay sports (especially baseball), and of course, American Legion baseball.

“It’s a different mindset in the summer,” said Coach Latino of the difference in prep and Legion baseball. “In prep, you come out the box and focus squarely on winning with power points and all that stuff. In summer, really the month of June, it’s all about preparation, it’s about using all these games to improve in certain areas. I think we’re off to a good start. I was encouraged by some things I saw, and other things we’re obviously in need of some work.”

Rising Blue Jay seniors form the nucleus of the 2016 Retif team, although Coach Latino is still tinkering with the lineup. They include five pitchers: Davis Martin, Lee Blosser, Chris Beebe. Collin Kulivan, and Zack Smith. Martin, Blosser, and Smith are southpaws. Rounding out the pitching staff are underclassmen Christian Hess and Andrew Cashman, both of whom are right-handers. Behind the plate are catchers Alex Watermeier and Collin Miller, both juniors.

Infielders are Nick Ray (SS), Marc Theberge (2B), Sam Ovella (1B; RF), Hunt Conroy (3B), and Marshall Lee (1B). Outfielders are Bryce Musso (CF), Tripp Ledet (LF), and Stephen Sepcich (RF), who wields a powerful bat at the plate. In 11 at bats in the first four games, Sepcich had seven hits, including three singles, three doubles, and a home run.

“We have a very good group, a solid group,” said Coach Latino in describing this summer’s Retif team. “They are athletically good and talented, but more importantly, they have good character and a lot of leadership.” 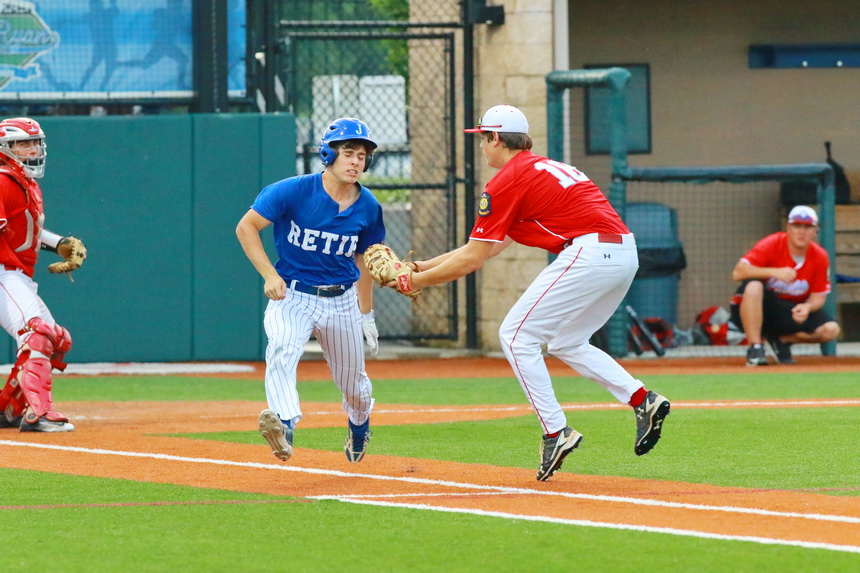 Tripp Ledet’s bunt is fielded by Deanie’s pitcher, who tags him out on the first base line.

This will be the first Retif team that anyone can remember which doesn’t have a single new Jesuit graduate as a member. Seniors who played Jesuit baseball this past spring, and were eligible to participate in Legion baseball, all of them opted out.

When asked about it, Coach Latino said: “I think that stuff comes in cycles. In 2014, which was my son’s senior year, we only had two. We had Christian (Latino) and Glenn Hyer, those were the only two that stayed. Last year, we had all of them stay. This year, none of them decided to stay. I don’t put labels on it. I don’t try to analyze it. It is what it is. We have the group that we have and we’re going to work hard and just try to get better.”

American Legion’s Code of Sportsmanship is recited by players from both teams before the start of each game:

I Will Keep the Rules.

I Will Keep Faith with my Teammates.

I Will Keep my Temper.

I Will Keep myself Fit.

I Will Keep a Stout Heart in Defeat.

I Will Keep my Pride under in Victory.

I Will Keep a Sound Soul, a Clean Mind, & a Healthy Body.