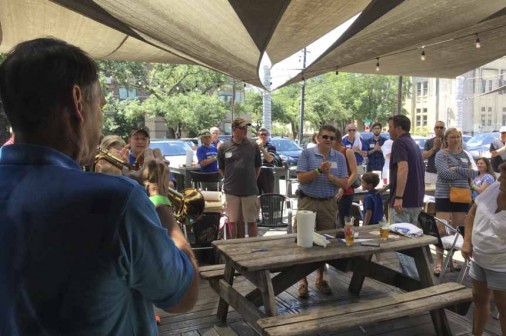 Bob Peri ’82 plays the Jesuit alma mater and fight song for attendees of the 2016 Houston alumni event at Jackson’s Watering Hole on May 7.

Just hours before the running of the 2016 Kentucky Derby, Jesuit High School alumni and their families living in and around Houston saddled up for a crawfish and jambalaya party. More than 150 people representing seven decades of Blue Jays gathered at Jackson’s Watering Hole on Saturday, May 7.

The menu included 600 pounds of Louisiana mudbugs, mouth-watering jambalaya, corn on the cob, new potatoes, and hot dogs for the little ones, all prepared by Jerry Eumont ’80 and his expert cooking crew. Keeping with the Derby theme, children took turns riding a Shetland pony around the establishment’s parking lot, a new addition for 2016.

Five years ago Jesuit president Fr. Anthony McGinn, S.J. and several members of the school’s advancement office traveled to Houston, threw a Texas-sized party at Brennan’s, and formed an alumni leadership team, inviting members to keep Blue Jay Spirit alive in Houston. The summer crawfish bash, now in its 5th year, is a product of that formation.

“Our leadership group in Houston has done an outstanding job of keeping connected to each other and keeping our Jays connected to their alma mater,” said Jesuit alumni director Mat Grau ’68. In appreciation of that effort, Jesuit foot the bill for the 2016 party. Attendees also received free t-shirts and car magnets, courtesy of Jesuit High School.

The Houston alumni chapter is led by Shawn O’Brien ’89, Brian Usner ’97, the aforementioned Eumont, and Christopher Cola ’93, who is currently serving as captain of the Houston team.

As he does on an annual basis, Cola thanked attendees for coming before introducing several guest speakers, including Fr. Jeff Johnson, S.J., who will replace Fr. Dan Lahart, S.J. as president of Strake Jesuit this summer, and Paul Posoli, president of Cristo Rey Jesuit. Blue Jays and their families also heard from Grau and Tom Bagwill, who is Jesuit’s director of institutional advancement. Both gave reports about happenings at Carrollton & Banks.

Houston alumni leaders hope to add a second event, perhaps a service related project, to the calendar for the 2016-17 year. They’re also discussing the idea of periodic after-work gatherings. 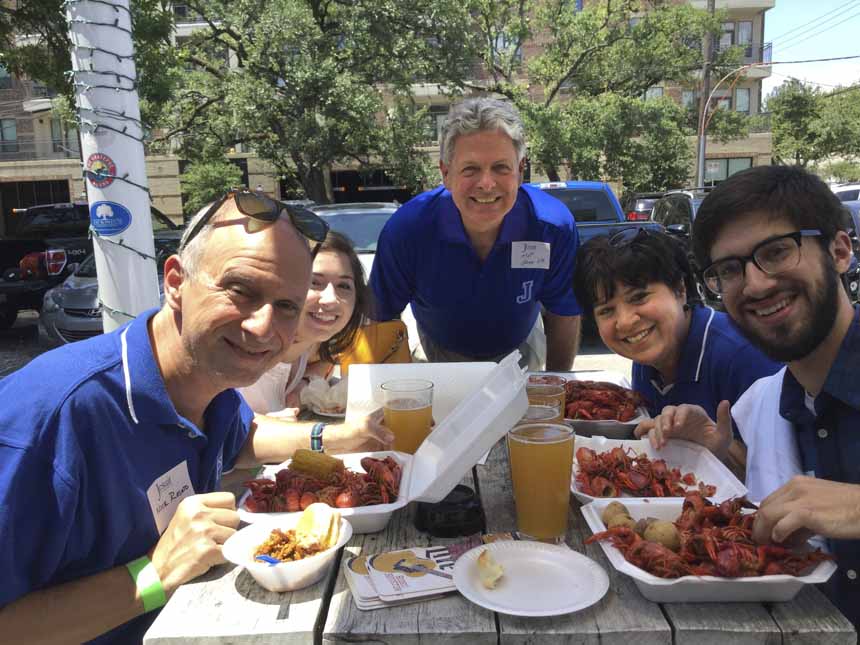 Alumni director Mat Grau with the Rosato family, including Nick ’79 and Nick, Jr. ’13.

In addition to Houston, Jesuit has official alumni chapters in the following cities:

Anyone interested in joining the Houston alumni leadership team, serving as a leader with another existing chapter, or starting an alumni chapter in their city should contact Mat Grau at grau@jesuitnola.org.