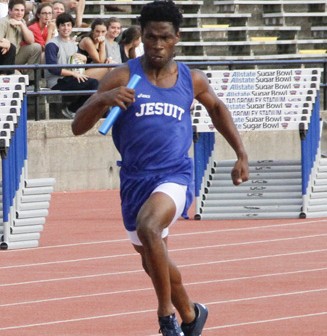 Jandon Briscoe (pictured at the district meet) won the 400-meter dash with a state record-setting time of 47.63 seconds.

Nine members of the track and field team participated in the 2016 LHSAA/Sugar Bowl Track & Field State Championships LSU’s Bernie Moore Stadium on Friday and Saturday, May 6 -7. From the team’s top 20 finish to personal and state record setting, the showing was impressive, to say the least.

Appearing in his first state meet and competing in the Para-Ambulatory division, sophomore Alex Klein met several personal goals. He threw the discus 88 feet; set a personal record in the javelin of 103 feet, 8 inches; and qualified for the Paralympic trials this summer in the 100- and 200-meter dashes, running 14.58 and 30.37 seconds.

Several Blue Jays finished in the top 10 of their individual events. Senior Carlos Zervigon competed in the 3,200-meter run, finishing 8th, with a time of 9:57.03. Senior Mark Jaunet competed in the javelin, throwing 158 feet, 11 inches to finish in 7th place. Reed Meric began the scoring for Jays with an impressive 800-meter run time of 01:56.11, less than 2 seconds away from the school record, finishing 5th overall.

Jandon Briscoe had the fourth best performance of the meet, finishing 4th in the 200-meter dash with a time of 21.48 seconds, less than a tenth of a second from the school record and the 5th fastest time of the meet. And in the race of the day, Jandon lined up in lane five for the 400-meter dash, and with the rest of the field chasing him, ran a school record-shattering time of 47.63 seconds to win the state championship. Not only did he win the 5A class title, he ran the fastest 400-meter time in all classes and the fastest in Louisiana this year.