Jays Are Shut Out and Swept by Bears in LHSAA Quarterfinals

Catholic High Wins Second Game, 8-0, to Sweep the Jays in a “Best of 3” Series 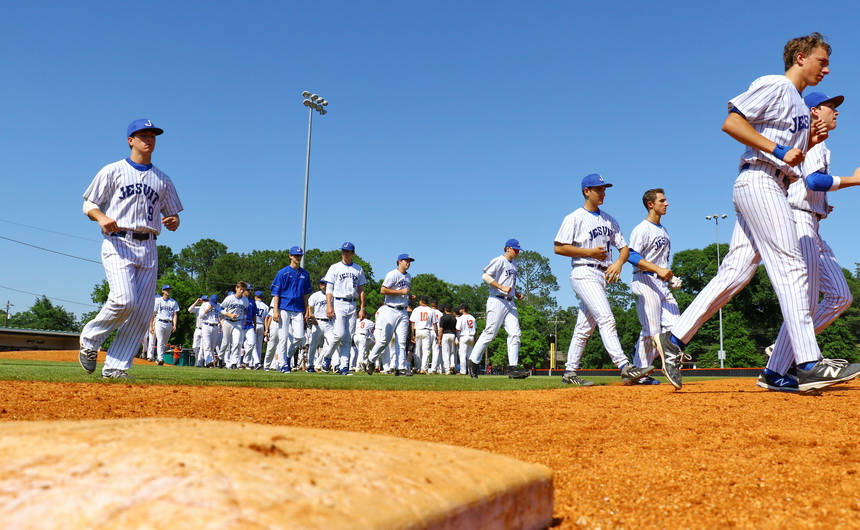 After absorbing a 6-5 walk-off loss in their first game of a “Best of 3” series against Catholic High on Friday night, the Blue Jays groggily returned to Grizzly Field on Saturday with noble intentions — and a tall order if there ever was one — of winning both games and advancing to the LHSAA state tournament next week in Sulphur. 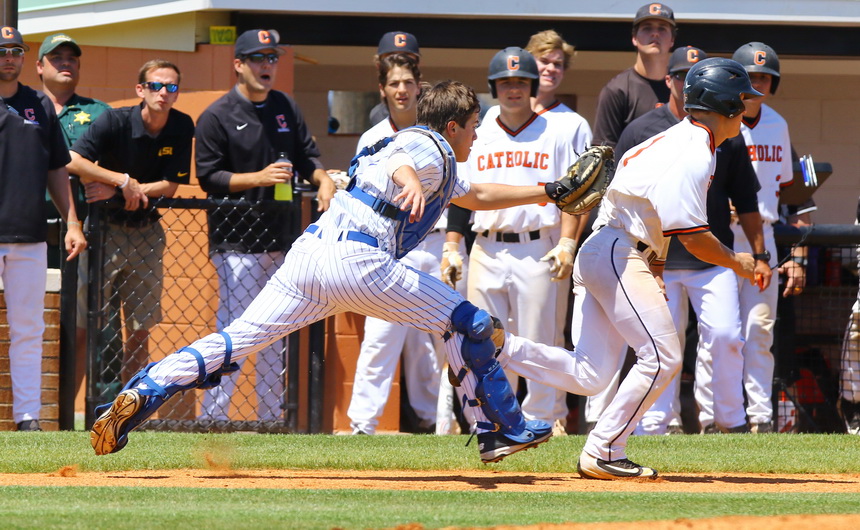 In the first inning, catcher Josh Schmidt runs down this Bear base runner between third base and home and tags him out.

There’s nothing wrong with hoping that Coach Joey Latino’s Blue Jays will right the ship and conquer the enemy. But after one complete inning in the second game between Jesuit and Catholic, the Bears held what certainly appeared to be an insurmountable 4-0 lead, dashing all hope and corking any bottles of adrenaline that still remained in the visitors’ dugout.

After two innings, the Bears had a 5-0 lead. After four innings, it was 6-0 and after six frames, 8-0. The Bears tallied 10 hits, feeding well off three Jesuit pitchers, including starter Hayden Fuentes, who took the loss for the Jays and ended his senior season with a 1-1 record on the mound. Fuentes pitched one-third inning, giving up four runs on three hits and walking a batter. Fuentes knows he’s a much better third baseman than he is a pitcher.

Another senior pitcher, right-hander Richard Oubre, relieved Fuentes for one and two-thirds innings. Oubre was on the mound Friday night when the Bears brought an abrupt end to Game 1 with a two-run homer in the bottom of the 10th inning. In game two, Oubre allowed one run on two hits. He walked one batter.

Oubre was relieved by junior left-hander Davis Martin, who pitched the remaining five innings, giving up three runs on four hits. He issued two walks and had five strikeouts.

The Jays offense struggled in the second game, unable to produce any big hits. Nick Ray continued to intimidate opposing pitchers by swatting a double in his first at-bat. Pinch-hitters Bryce Musso singled in the fifth and Jake Chanove did likewise in the sixth. Chanove advanced to third base on Stephen Sepcich’s double. While Catholic’s pitchers only walked three Blue Jays, eight were left stranded in the game. 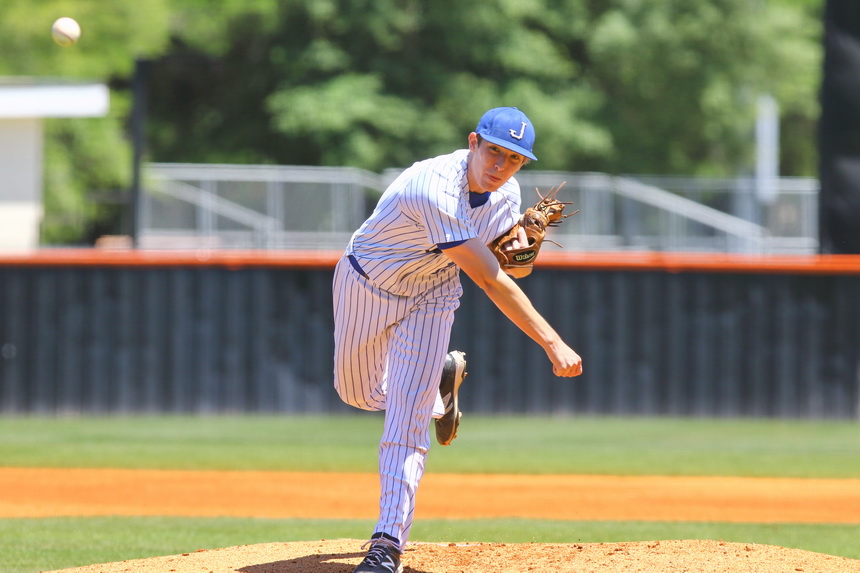 Hayden Fuentes started on the mound for the Jays and took the loss to even his record for the season at 1-1.

When asked if Friday night’s loss might have weighed more heavily on the Jays than previously thought, Coach Latino had this to say: “If we’re going to define ourselves and our season by one game, then shame on us. This is an excellent group of kids and there’s been great leadership in the senior class. Did we run out of steam? That’s the best way to phrase it. The loss last night was certainly tough, and then going back to New Orleans and having a quick turnaround to come back here was tough. Then they get four runs in the first inning today and it was going to be a long haul after that. Catholic is awfully talented. Their pitchers did a good job today just pounding the strike zone, they made plays, and we couldn’t put a big inning together.”

The Jays were also playing without their regular second baseman, Brandon Briuglio, who also pitches. The Jays held practice on Thursday at Kirsch-Rooney Stadium to become better acclimated to playing on a grass field such as the one at Grizzly Field. During routine defensive drills, a ground ball took a bad hop and tore Briuglio’s fingernail while also fracturing his finger.

“Losing Brandon before the Catholic series hurt,” said Coach Latino. “I’m not saying that it would have made a difference in us winning the series. But when you lose your top hitter and one of your top pitchers and one of your emotional leaders, it’s tough. The way we lost last night, the hangover effects, if you will, coming into today. The first inning set the tone for the day and we just got in such a deep hole early that it was difficult to respond after that. It is what it is.”

“Looking back on this season with my guys, I couldn’t be more proud of them,” he said. “I think we’ve had a really outstanding year not just record-wise (26-9), but in terms of how much they’ve grown, how much they’ve matured, and watching them come out of themselves and more into each other, more into the team. That is probably what I’m most proud of.

“We’ve got a pretty good nucleus of kids coming back,” he continued. “I’m extremely proud of our seniors. They showed great leadership throughout the year, great maturity, and everything we’ve asked them to do, they’ve done it. We’ve had to overcome a lot of adversity this year, tough road trips. There was one stretch when we played 10 games in eight days, but they answered every call. I can’t be more proud of a group than I am of them.” 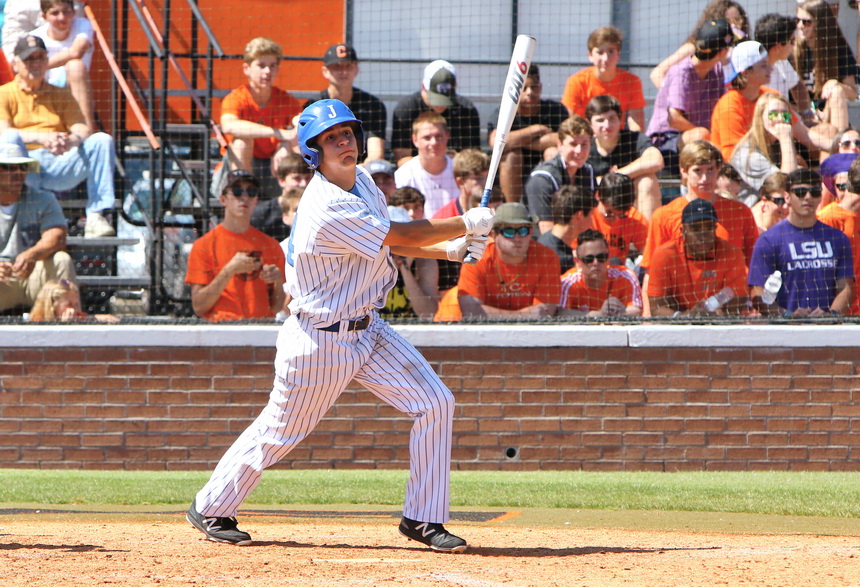