Jays Find a Way to Win, They Just Needed an Extra Inning 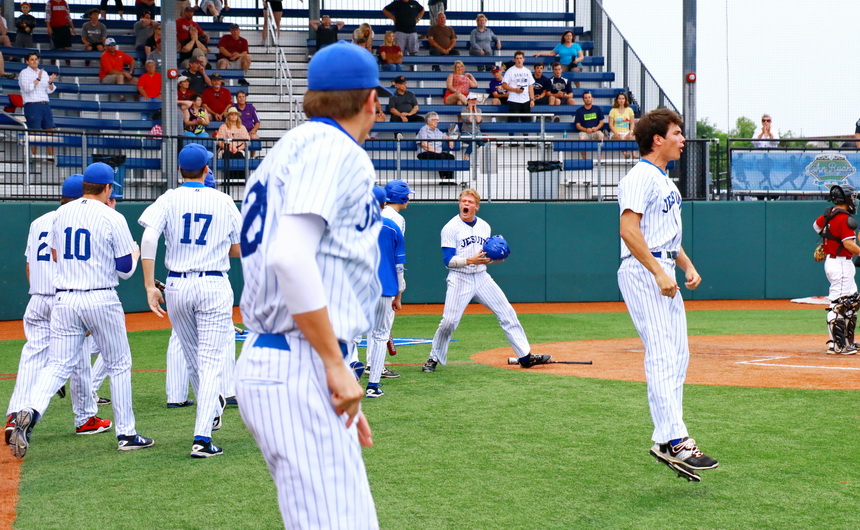 In the top of the eighth, Nick Ray scores the go-ahead run on Austin North’s single to give the Jays a 4-3 lead.

The Blue Jays were causing the rashes to break out while playing Destrehan in game two of a “Best of 3” series on Saturday at John Ryan Stadium. It couldn’t have been the humidity or rain. The game ended before severe weather rolled through the area. No, it was the Jays. 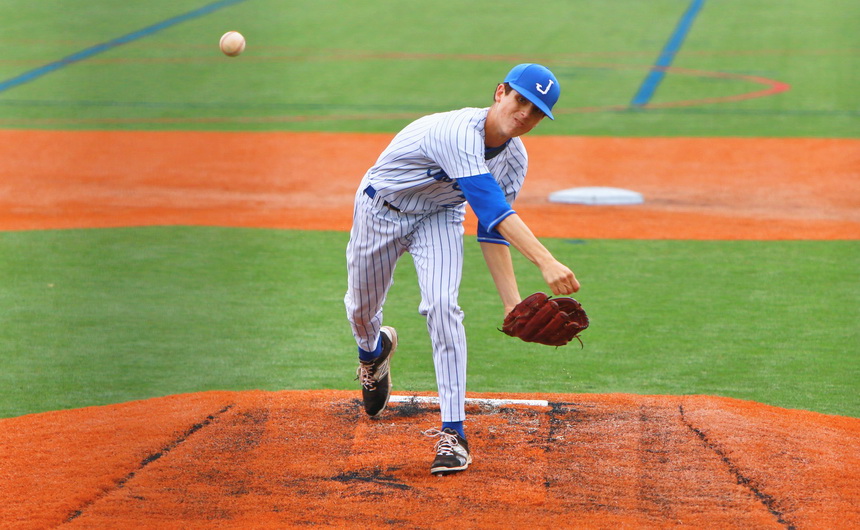 Richard Oubre started on the mound for the Jays and pitched six innings. He allowed one run on four hits and one walk. He struck out three Wildcats.

First, they spot the Wildcats one run in the bottom of the second inning (Destrehan had the bottom for the second game as the Jays had it for the first game). The Jays claw their way back to tie it in the fourth, score a go-ahead run in the fifth, and add an insurance run in the seventh for what looked like an insurmountable 3-1 lead. But the Wildcats are not going home quietly – they have back-to-back leadoff singles in the bottom of the seventh. A walk, two ground outs, and Destrehan has tied the game at 3-3, sending it into extra innings. Suddenly, the Jesuit fans are twitching and scratching.

Jesuit shortstop Nick Ray takes a leadoff walk and when Austin North singles, Ray goes for third base. He dives as the throw is close. So close, that the ball hits his helmet and ricochets into foul territory. Ray sees the ball but the third baseman doesn’t. Three seconds later, Ray is sliding into home unscathed for the Jays to retake the lead, 4-3. Meanwhile, Austin North lands on second base. Brandon Briuglio is at the plate and hits his second single, a ground ball between first and second bases. North scores to make it 5-3, and Briuglio extends a base hit to second base.

“We were fortunate and Nick did a tremendous job not breaking stride,” said Coach Joey Latino. “He came to third without hesitation, and the throw was a good throw. It was offline by maybe a foot and we get the fortunate break. It bounces off his helmet. That puts us up. And then we get another big run behind that.” 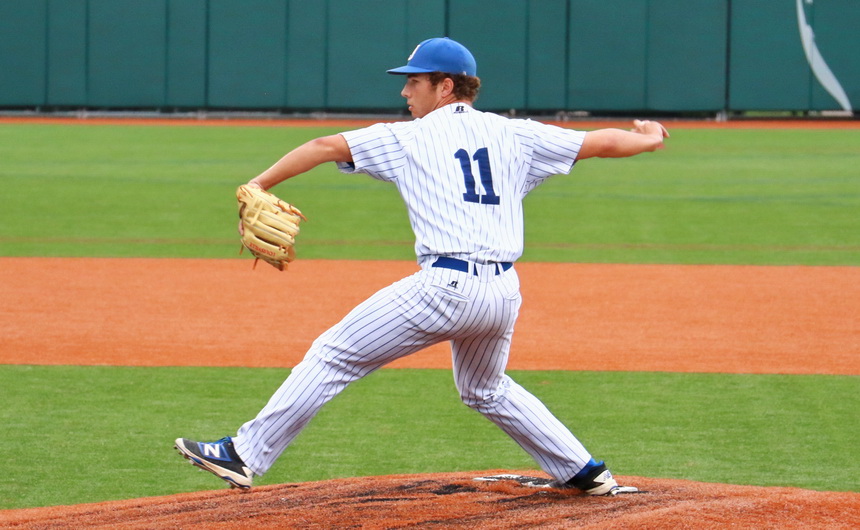 Jesuit’s fourth pitcher, Todd Crabtree, entered the game in the bottom of the eighth and walked a Wildcat to load the bases. He struck out the next one for out number two and got the next batter to ground out to end the game.

The bottom of the eighth and the Wildcats have two runners on with one out. The Jays send in the “closer” – Todd Crabtree, who issues a walk to load the bases. More itching. The Crab is throwing hard and strikes out the next Wildcat. The Jesuit fans are on their feet cheering wildly. One more out, and the Jays get it — and the win — when a Wildcat grounds out to end the game.

“They’re never easy, especially when you’re playing a gritty talented team like Destrehan and so much is at stake, so we’re on to the next round,” said Coach Joey Latino. “I’m very proud of the boys, very proud of the way they overcame adversity. We could have folded there after the mistake in the seventh inning. But we regained our composure, we got big hits in the eighth, took the lead, and then Todd (Crabtree) did a great job closing it out. Todd’s been there before and he showed a lot of poise getting those last two outs. And we’re fortunate enough to be moving on.”

Coach Latino has often said the Jays are a resilient team. “That’s what I’m most impressed with this team from the beginning of the season until now — we’ve been able to handle that type of adversity. I think being in so many close games throughout the year has helped us in that regard. I see a very mature team, a team that didn’t sulk, and just came back and got the job done in the eighth.”

Nola.com: Jesuit scores 2 in eighth to advance past Destrehan, 5-3

The New Orleans Advocate: Jesuit advances past Destrehan to Class 5A quarterfinals