A Spark in the Jesuit Lineup 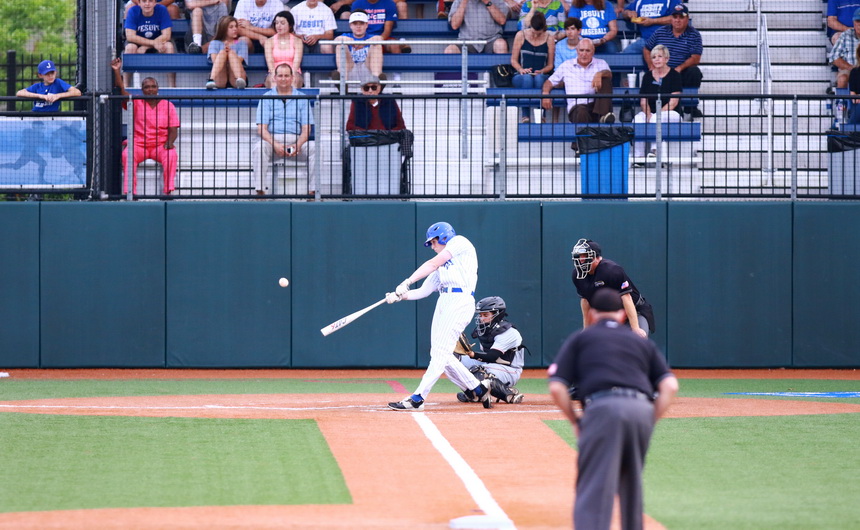 In the third inning, Jake Licciardi provides the “spark” the Jays need by smacking a double to center field.

The series between Jesuit and Destrehan will air live on SportsNOLA.com this weekend as part of the website’s live high school sports coverage presented by First NBC Bank. Read Lenny Vangilder’s Entire Article on SportsNola.com.

View the Live Broadcast of Jesuit – Destrehan Games on SportsNola.com.

Blue Jay baseball fans have grown accustomed to one-run outcomes, and lately, even shutouts. They had the pleasure of experiencing both Friday night at John Ryan Stadium.

The Jays won their eighth consecutive game with a shut out of the Destrehan Wildcats, 1-0, in the first of a “Best of 3” game series in round two of the LHSAA Class 5A playoffs. 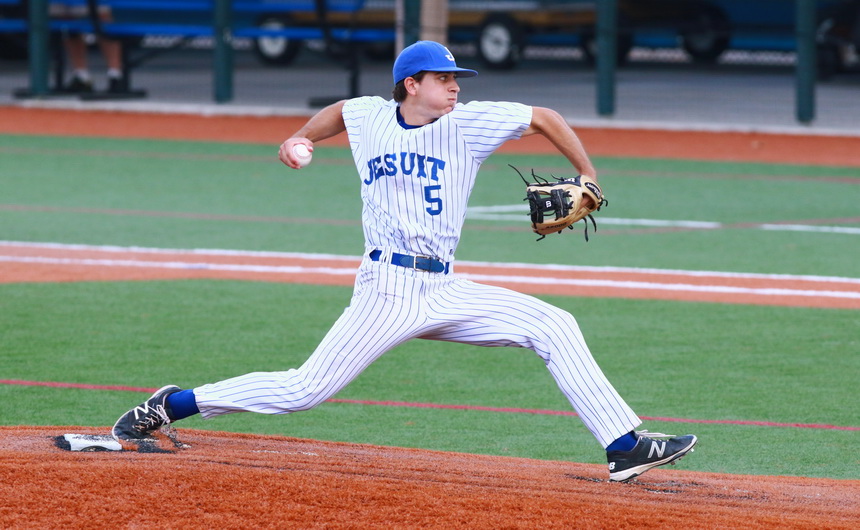 Brandon Briuglio was rock steady on the mound for the Jays.

Jesuit and Destrehan play their second game on Saturday morning at John Ryan Stadium with first pitch at 11. If necessary, a third game will be played at 4 p.m. to decide which team advances to the next round of the playoffs. Admission for each game is $7 each for adults, students, and children (ages 6-11). Student IDs and season passes are not accepted at the gate for LHSAA playoff games.

The Jays (25-7) rode the steady right arm of Brandon Briuglio, who pitched a complete game, and the offense revved it up in the third inning with a pair of timely hits that resulted in their only run of the game.

It was the Jays’ ninth game this season decided by one run; five of the outcomes were in Jesuit’s favor, four were not. The Jays have also shut out eight opponents this season. In the last five games, four of them have been Jesuit shutouts. The Jays themselves have been shut out only twice.

In the third inning, Jesuit’s first baseman Jake Licciardi provided the “spark” for the offense when he whacked a fast ball to center field for a stand-up double. Outfielder Mark Beebe hit a sacrifice fly to right field and Licciardi tagged up and landed on third base. Then, shortstop Nick Ray hit a two-out single that scored Licciardi.

“We just needed a spark in the lineup,” said Licciardi. “Their pitcher was doing really well. We just looked for a spark and a fastball and I got it. Now we just have to give Destrehan the knockout punch.” 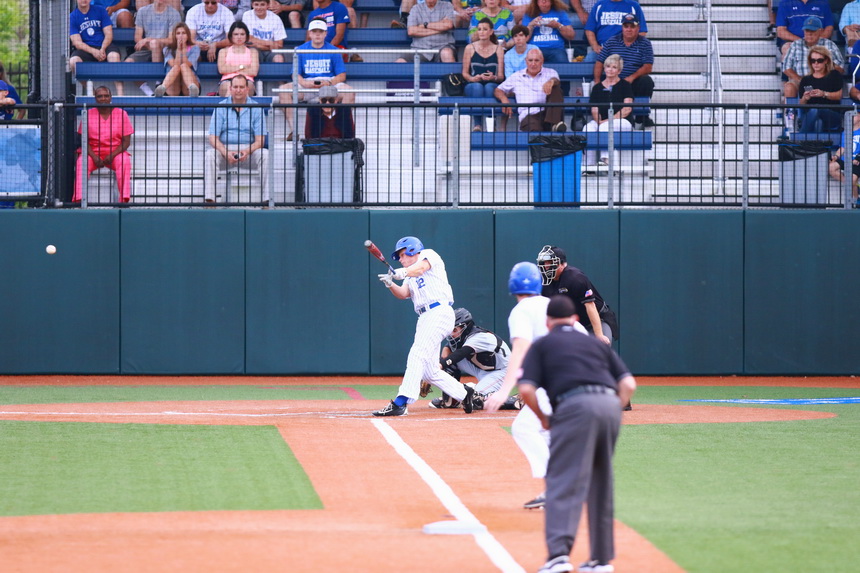 Nick Ray swats a single that scores Jake Licciardi from third base. The Jays needed only one run and this was it.

Coach Joey Latino agreed that Licciardi’s hit was timely. “Jake’s hit ignited us because up until that point, I thought their pitcher was doing an outstanding job. I didn’t think he had great command, but when he needed to make a good pitch, he made it. They weren’t going to make a lot of errors in the field. They are very sound defensively. So Jake kind of gave us a kick start there.”

Briuglio pitched the full seven innings, scattering five hits and walking one batter while striking out six, including three of four Wildcats who were at the plate in the top of the seventh.

“I thought I was consistent tonight,” said Briuglio. “I was just trying to throw strikes and hit my spots. Jake came up with a very big hit and Nick came in and got the job done and I thought it was a great win for the team. My defense made great plays behind me. Nick and (third baseman) Hayden (Fuentes) made excellent plays the whole night. It’s really big winning game one. But tomorrow is even more important to come out and get the job done in the second game.

Coach Joey Latino told reporters after the game that Briuglio, whose mound record is 6-0, is a two-pitch pitcher.

“Brandon keeps the ball down and he locates well,” said Coach Latino. “But the key for him is to get the first guy out. I think he had one walk for the night and scattered the five hits. I thought we played excellent defense behind him. I thought Nick and Hayden had a really fine game. Brandon just stays within himself. He’s not going to try to overdo. He’s not going to reach back for something that’s not there. He stays within his game. It seems like that last inning, that’s pure adrenaline, that’s a kid feeling the moment, that’s a competitive kid, that’s a kid who’s a winner.” 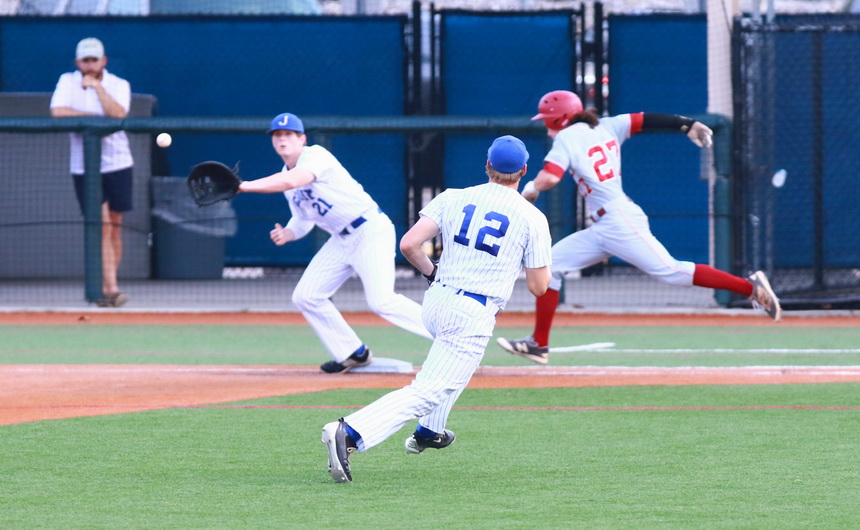 Shortstop Nick Ray scoops up a grounder and tosses to Jake Licciardi at first base for the out. The Jays played great defense against Destrehan in game one.

The Jays picked up their third and final hit of the game when Stephen Sepcich singled in the fourth inning. Jesuit had an excellent opportunity to put the game away in the fifth inning when Destrehan’s pitcher walked three batters to load the bases with no outs. But the Jays could not convert. A total of six Jays were stranded on bases.

As a team, the 2016 Jays are batting .286 and Coach Latino almost looked as if he stifled a yawn addressing the absence of explosive firepower.

“We’re not going to light the world on fire on the offensive end,” he said. “Occasionally we get our big innings, but this has been us all year. What you see is what you get, so to speak. If we can pitch it like we pitched tonight and play defense like we did, that’s really been our focus all year long. If the game is going to be low-scoring, let’s prepare for that. Our pitchers and our defense have been doing a good job.

Either the Jays or the Wildcats will advance to play the winner of the 13th-seeded Hahnville – 4th-seeded Catholic High series. Hahnville won the first game Friday night.

Nola.com: Jesuit’s third-inning run holds up against Destrehan in Game 1