Senior Week Opens with a Lunch and Senior Awards 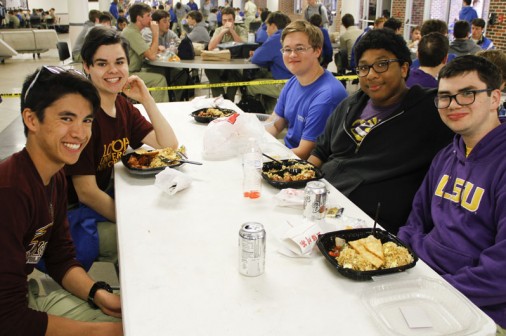 Blue Jays of the Class of 2016 were treated to a delicious lunch from restaurant Five Happiness on the first day of Senior Week, April 25 – 29.  The annual rite of passage rewards the upperclassmen for their hard work and exemplary behavior throughout their final year as high school students.

While seniors noshed on Chinese takeout, class president John Nimmo handed out some special awards to his classmates. Many seniors chose to swap out their khaki uniform shirt for a shirt from the college they’ll be attending in the fall.

The well-deserved senior celebration will continue with lunchtime activities each day this week (see the schedule below), concluding with Commencement Luncheon at which the graduating seniors are officially welcomed into the Alumni Association.

Seniors will enjoy a delicious jambalaya lunch and take to Will Clark Field to play a game of cabbage ball.

The Class of 2016 will slip and slide their way into a fun afternoon in this favorite annual activity.

Seniors will gather in the far end of the school yard and on S. Solomon Street to take part in one of the newer traditions at Jesuit — amassing the autographs of their classmates and beloved faculty and administration on their uniform shirts.

After being formally dismissed from their final Morning Assembly as Jesuit students, seniors make their way into the Auditorium to begin Senior Day activities. The main attraction is the Senior Showcase, a chance for Blue Jays to share their talents — and a few laughs — with their classmates.

Afterwards, seniors board several school buses and make their way downtown where the 273 members of the Class of 2016 will be officially welcomed into the Jesuit Alumni Association at the Commencement Luncheon. This year the luncheon will be held in the Bienville Club Lounge of the Mercedes-Benz Superdome.

Seniors and alumni guests will hear from speaker Gerald Herbert ’82. Gerald is a staff photographer for the Associated Press who has covered major events including the 9/11 attacks at both the Pentagon and the World Trade Center, the Gulf Oil Spill, Mother Teresa, Hurricane Katrina, the World Series, the Olympics, the Super Bowl, the NBA Finals, and the World Series, among others. Herbert has also been a staff photographer for the Washington Times, the New York Daily News, and a freelancer for the AP in New Orleans, Boston, and New York. (View Gerald’s portfolio.)