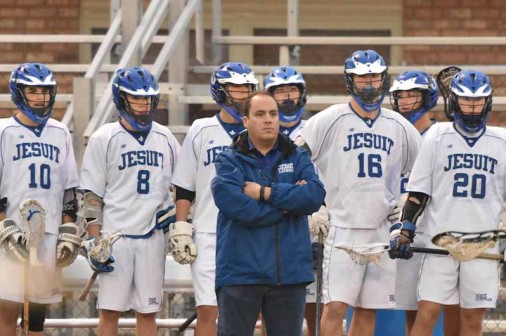 Coach Steve Krobert ’05 and his team look on from the sideline as the Blue Jays vanquish Mandeville from the LHSLL playoffs.

Senior goalie Rob Hinyub was between the pipes for the Jays.

Jesuit will need to beat St. Paul’s — the school it defeated in the last four championship games — to have a chance at winning a fifth straight LHSLL title.

The Jays’ semifinal game is scheduled for Saturday, April 23, at Joe Yenni Stadium in Metairie. The winner will face the victor of the other semifinal match between Brother Martin and Loyola College Prep. Jesuit is serving as host of the state tournament.