Blue Jays in a 5-4 Walk-off Win, Gift-Wrapped by the Crusaders 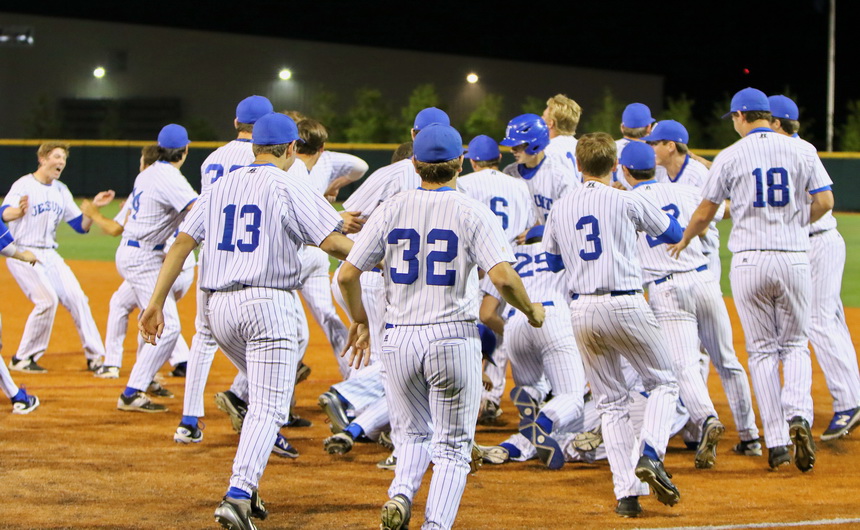 The bases were loaded in the bottom of the 10th inning when Brandon Briuglio popped up to center field. It was a routine catch that the outfielder missed, giving the Jays a 5-4 walk-off win. When the fly ball fell to the ground, the Jays emptied the dugout to celebrate with Briuglio, the only player wearing a shiny Blue helmet.

The Blue Jays needed this game, big time. Having lost four district games by one run, the Jays were due for a huge win. And they got it against Brother Martin in a 10-inning battle on Saturday night at John Ryan Stadium. 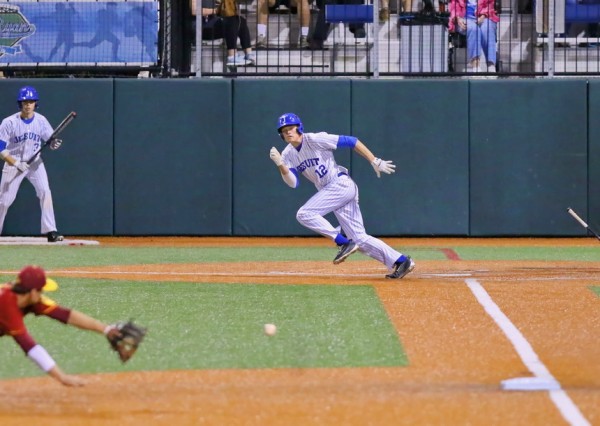 Nick Ray watches his line drive shoot past the Crusaders’ third baseman for a double in the fourth inning. Ray’s hit plated Connor Maginnis who was on second base.

While it wasn’t the best way to win a baseball game, the Jays gratefully accepted the Crusaders gift-wrapped, two-outs, bases-loaded, bottom of the 10th fielding error. On a 2-2 pitch, Brandon Briuglio hit a routine fly ball to center field. As the ball returned to Earth, the Jays were ready to extend the game to 11 innings. Suddenly, there was no reason to. The fly, in the fielder’s glove for a millisecond, fell to the ground. Just like that, as if some invisible force plucked the ball right out of the Crusader’s glove. Or maybe it was some powerful backspin Briuglio’s been working on to make fly balls harder to catch.

Jesuit’s Bryce Musso had already crossed home plate when the outfielder notched Brother Martin’s fourth error of the game. The Jays emptied their dugout to mob Briuglio and celebrate their 5-4 win, which comes after two consecutive 2-1 losses, the first to Brother Martin last Tuesday, and last night to Rummel.

“I thought BM played hard, as you always expect,” said Coach Joey Latino. “They are relentless and they play with such passion. And our kids did the same. This is a great Catholic League high school baseball game. It’s unfortunate the way it ended, but like I told our guys, nobody feels sorry for us when things go against us. Tonight, fate lent a hand and we’ll take it.”

Briuglio started on the mound and went four and two-thirds innings. The right hander (who bats left) gave up four runs on six hits. He walked four batters and struck out three. With two outs in the top of the fifth, Todd Crabtree relieved Briuglio, who plays second base when he’s not on the mound. Crabtree earned the win to improve his record to 2-2. Over five  and one-third innings, Crabtree allowed three hits, no runs, three walks, and eight strikeouts. 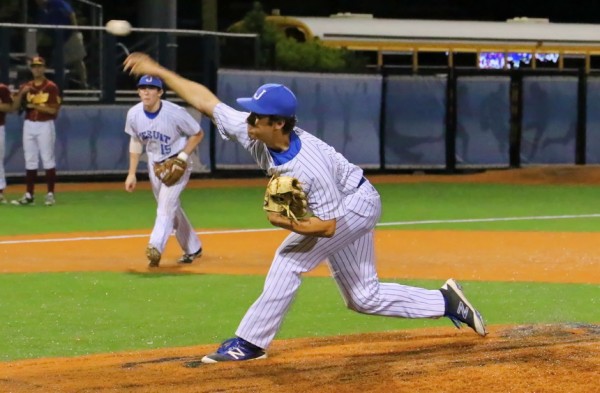 Todd Crabtree came in to relieve Brandon Briuglio with two outs in the top of the fifth. The Crab finished the game, allowing three hits and three walks, while striking out eight Crusaders. “Crab was amazing,” said Coach Joey Latino.

“Crab did an amazing job,” said Coach Latino of his reliever, a junior. “That’s been his role all year. He can be a starter but I’ve needed him to step up into that reliever’s role. I thought my starter Briuglio pitched well. He’s been better, but I thought he pitched well. He gave us what we needed to get us into those late frames. We didn’t expect it to go 10, but the fact that it did, Todd’s gone that stretch before and he did an amazing job tonight.”

The Jays had eight hits, including a double in the fourth by Nick Ray, a triple by Marc Theberge in the first, and singles in the fifth and ninth innings by Jake Liccciardi. Hayden Fuentes, Stephen Sepcich, Chance Melancon, and Josh Schmidt each had a base hit.

“There was no quit in our guys,” said Coach Latino. “Every time we scored and tied it up, Brother Martin came back and punched a couple up themselves. We were able to get a big run in the fourth and again in the sixth. Both teams got big outs in the extra innings. We had a chance or two. They had a chance or two. Pitchers kept making quality pitches. Fortunately, we got that break in the end.”

The Blue Jays play three games this week at John Ryan Stadium. First up is Holy Cross on Tuesday, April 12 at 7p.m. St. Augustine visits on Friday, April 15 at 5 p.m., and on Saturday, April 16, St. Thomas Aquinas (Hammond) plays the Jays in a non-district game that will start at noon.