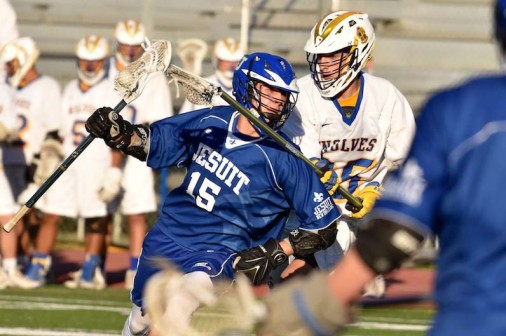 Senior attacker Max Murret, who tallied four goals and three assists in the game against St. Paul’s, drives through a defender. The Jays won the contest in Covington, 13-4.

The Jesuit lacrosse team capped off an undefeated district season by whalloping the Wolves of St. Paul’s, 13-4. The game was played on Saturday evening, April 2, at Hunter Stadium in Covington.

The regular season-ending victory gives Jesuit a 7-0 district mark and an overall record of 15-1. Jesuit lost to Christian Brothers of Memphis, TN, on March 23.

Next, the Blue Jays move to the quarterfinals of the Louisiana High School Lacrosse League playoffs. Their first round opponent has yet to be determined.

Jesuit is attempting to win its fifth consecutive LHSLL championship. Each of the last year four years, including 2015, the Jays beat St. Paul’s to take the state title.