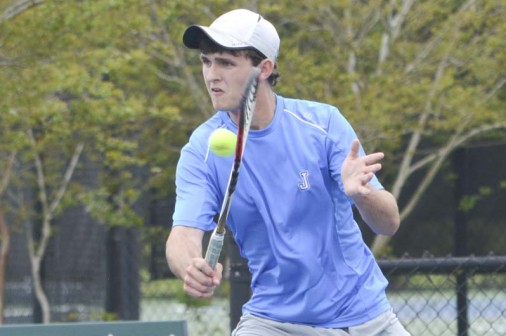 The Jesuit tennis team didn’t crack under the pressure against Brother Martin. The same can’t be said, however, for the racket of senior Jonathan Niehaus.

Jesuit’s tennis team got solid performances all the way through the line-up to post a 7-0 shutout over a strong Brother Martin squad on Thursday, March 31 at the UNO Tennis Center.

The Jays, who frequently play reserves in dual meets, opted to bring out the heavy lumber for this one, playing the top seven healthy players from their 18-man varsity squad.

A pair of juniors notched the other two wins in singles play. Jack Steib won 8-2 at Line 3, and Graham Buck posted the same score at Line 4.

In doubles, senior Brandon Beck and junior Trey Hamlin scored an 8-1 win at Line 2. Steib teamed with senior Cristian Archaga for an 8-2 win on Line 3.

Next up for Jesuit is a dual meet with Holy Cross on Tuesday, April 5. Match time is 4:00 at the UNO Tennis Center.