Jays Get Back on the Knight Track 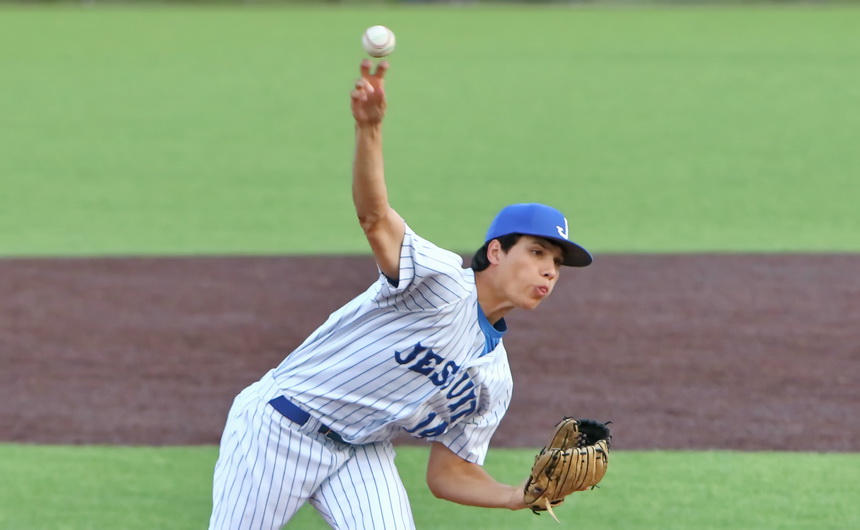 Jesuit’s Mason Mayfield has a bazooka of a right arm and it was on full display Tuesday evening against St. Augustine at RBI Field (formerly Wesley Barrow Stadium).

Mayfield struck out five of the first six Purple Knight batters and pitched mostly fast balls with pinpoint control in a game that was called after five innings because of the 10-run rule. In shutting out St. Aug, Mayfield struck out seven batters.  The win improved his record to 3-1. 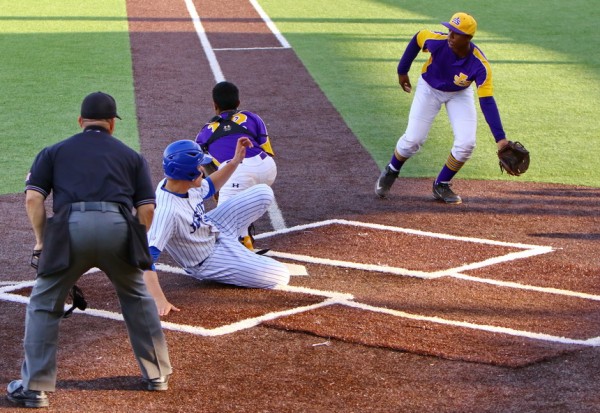 Nick Ray, who hit a leadoff single, slides safely home on Brandon Briuglio’s double. Ray’s run was the first of 10 plated by the Jays against St. Aug.

“Mason’s performance was outstanding,” said Coach Joey Latino. “He gave us exactly what we needed, stayed in the strike zone, and got ahead of a lot of hitters. We primarily used his fastball and when Mason’s on, and he can locate like he did tonight, he’s awfully tough.”

Someone mentioned in the fourth inning that Mayfield was so far pitching a perfect game. It put the jinx on the senior northpaw. One of his cutters got away from him, plunking the batter, the first Purple Knight to reach base. In the bottom of the fifth, Mayfield lunged in an effort to snag a sharp grounder that was hit back to the mound. But his glove deflected the ball and the Jays couldn’t make the play, giving the Purple Knights their only hit.

The Jays are 15-6 (2-2 in district) and return to John Ryan Stadium for a Wednesday afternoon game against Central Catholic of Morgan City. First pitch is 5 p.m.

“It’s a tough district and I have every reason to believe that every game will be very competitive,” said Coach Latino of Jesuit’s 15-6 overall record (2-2 in district play). “Two-two is not bad after four (district) games. It’s not where we wanted to be, but 2-2 gives us a chance. Going 1-3 would have been an awfully tough uphill climb. At least now we’re back to even and we just have to focus on the next game.”

The next game is Wednesday, March 30 when the Jays return to John Ryan Stadium to host Central Catholic of Morgan City. First pitch is 5 p.m. 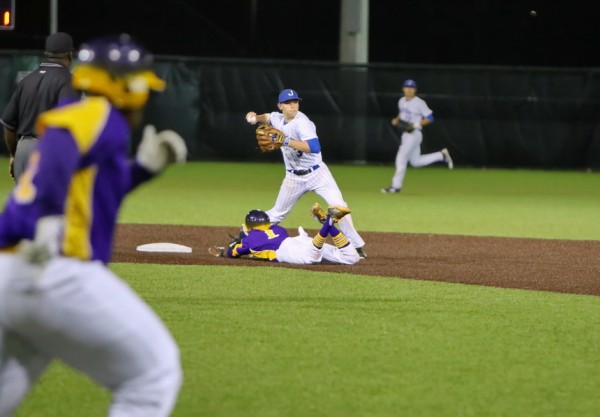 A 3-6-3 double play: In the bottom of the fifth inning, a grounder is caught by first baseman Marshall Lee, who throws to shortstop Marc Theberge (above) for the out at second base. Theberge throws back to Lee for the out at first base.

“I liked the way we executed and that was the thing that was grossly lacking against Holy Cross last Saturday,” said Coach Latino. “We made four errors. Every one of their four runs was unearned and we can’t afford to do that. The teams in this league are too good. We have to play good defense behind our pitching, which I think is solid, and get timely hits.  I told the boys we’re at least pointing back in the right direction. We have to make sure we stay that way.”

Coach Latino added that he believes the Jays are making progress. “We obviously have to keep working as there are a lot of things we can continue to improve on,” he explained. “The main thing with us is we have to be more consistent and I think you’re going to hear that from every coach around the city. You have to play game in and game out at the same level and right now we haven’t been doing that. But tonight, hopefully, we got back on the right track.”