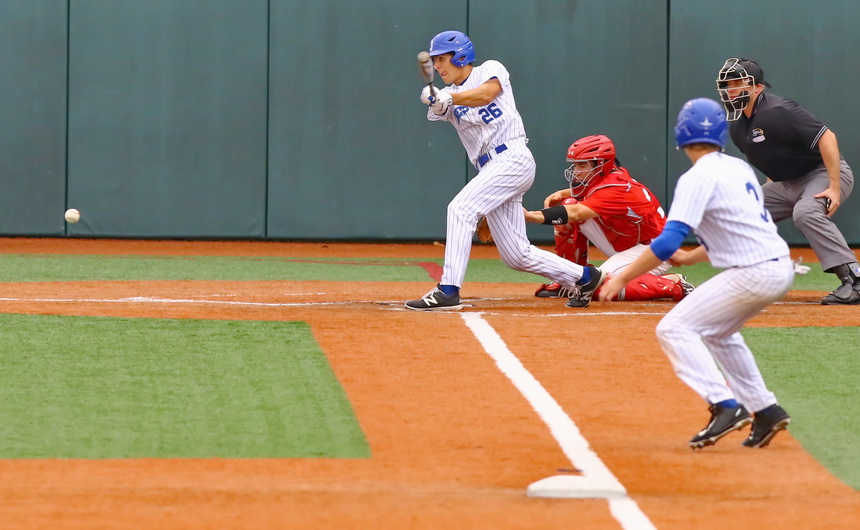 In the fifth inning, Austin North hits this pitch between shortstop and second base to score Marc Theberge from third base and Nick Ray from second. With a run scored earlier in the same inning, the Jays pulled ahead of the Raiders, 3-1.

The Blue Jays shook off an opening District 9-5A loss earlier in the week to John Curtis and evened their record Thursday afternoon by defeating Rummel, 4-1, at John Ryan Stadium.

The Jays bested the Raiders with strong performances on the mound and a big three-run fifth inning.

The first four innings went scoreless with the Raiders breaking the game open in the top of the fifth inning. A Raider singled on a close play at first base, then he stole second base, and plated home on the second single of the inning. It turned out to be Rummel’s only run of the game. 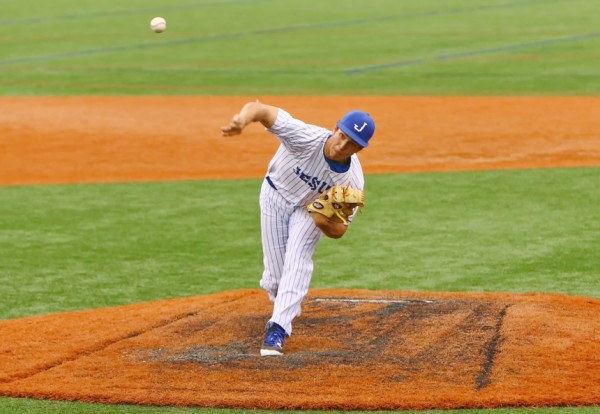 Todd Crabtree relieved Richard Oubre after the Raiders broke open the game in the top of the fifth to take a 1-0 lead. Crabtree shut down the Raiders over the next 2.2 innings to pick up his first win of the season and improve his record to 1-1.

The Jays were hitless until the bottom of the fifth. Leadoff batter Sam Ovella drew a walk and courtesy runner Jake Chanove was able to steal second base. Marc Theberge laid down a nice bunt but the throw to first base was off the mark and Chanove scored standing up while Theberge reached second. Bryce Musso’s sacrifice bunt advanced Theberge to third base.

With one out, that brought up the top of Jesuit’s batting order. Shortstop Nick Ray drew a walk and stole second base. Second baseman Brandon Briuglio ended his 16-game hitting streak when he struck out (he popped up and grounded out in his other at bats. Outfielder Austin North then hit a two-out single between shortstop and second base to plate Theberge and Ray.

In the bottom of the sixth inning, the Jays added a run for insurance. Connor Maginnis doubled and scored when Jake Licciardi’s fly ball landed in no man’s land, the gap between left and center fields. Jesuit had only four team hits: the double by right fielder Maginnis, North’s pair of singles, and Theberge’s bunt single that he stretched to second base on a throwing error.

The Jays went with Richard Oubre to start the game. The senior right-hander pitched 4.1 innings, giving up one run on six hits. Oubre did not walk a batter and he struck out five Raiders. After the Raiders scored their lone run in the top of the fifth, Oubre was relieved by Todd Crabtree, who pitched 2.2 innings, allowing one hit, one walk, and striking out two Raiders. Crabtree, another right-hander, got the win to even his record to 1-1.

“We struggled again early and it looked like déjà vu all over again,” said Coach Joey Latino in his assessment after the game. “But we took advantage of a couple of miscues by Rummel in the fifth inning. North got the big hit in the six hole there to put us up 3-1. I thought Crabtree did a great job coming in to relieve Oubre, who also pitched extremely well. You hold district teams to one run, you’re doing something right on the mound, and we played really good defense behind our pitchers.” 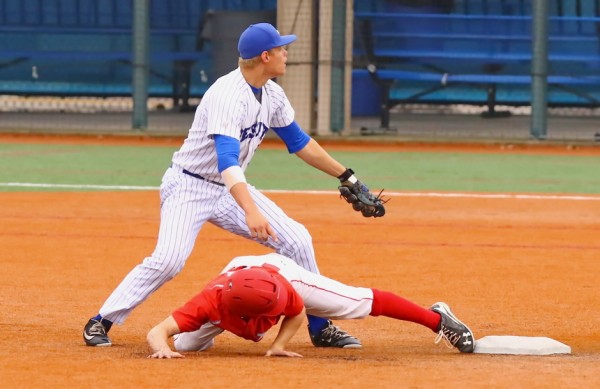 Nick Ray tells the field umpire that he tagged the Raider when the runner’s foot was not touching the plate. Ray’s plea fell on deaf ears.

Coach Latino said he talked to the team about last Tuesday’s 1-0 loss to Curtis. “Our players are not into taking shortcuts, they’re not going to shy away from the work,” he said. “We’re putting in the work. I think our offense is reflecting a confidence issue more than anything. The guys just have to get back to feeling good about what they’re doing, not pressing so much, and just letting themselves play ball. Once we do that, we’ll be fine.”

In keeping with a long tradition, the Jays (13-5 overall) do not practice on Good Friday, much less play a game. However, Holy Saturday (March 26) is different.

“We just roll back around and play another game on Saturday,” he said, referring to the 1 p.m. starting time for the Jesuit – Holy Cross game, which will take place at the Tigers’ field off Paris Avenue. Admission is free for Jays and Tigers with their student IDs; $5 for adults and $3 for children (ages 6-11). Season passes will be honored.

Looking ahead, next week’s schedule has the Jays playing a district game against the Purple Knights on Tuesday, March 29, at RBI Field (formerly Wesley Barrow Stadium). On Wednesday, March 30, the Jays stay in tune by hosting Central Catholic (Morgan City), a District 7-1A team, in a non-district game at John Ryan Stadium. First pitch is 5 p.m. In five recent games, the Eagles went 4-1, scoring a total of 47 runs while allowing nine runs.