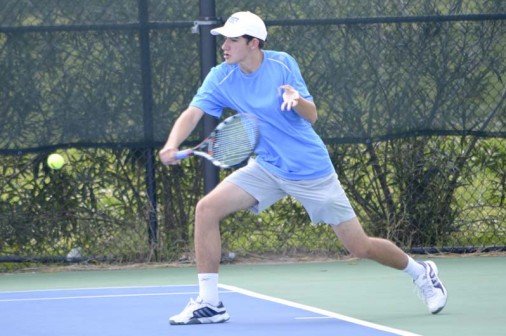 Jesuit’s tennis team improved to 7-0 on the season with a 5-2 win over the Ben Franklin Falcons on Wednesday, March 23 at the UNO Tennis Center.

Sophomore Christian Lacoste led the team to a 3-1 advantage heading into singles play with an 8-1 win at Line 2 singles. Junior Andrew Ryan scored an 8-0 shutout at Line 3, as did sophomore John Nuttli at Line 4.

In doubles, Ryan teamed with senior Andrew Westholz to clinch the meet with an 8-0 win at Line 2 doubles. Moments later, senior Cristian Archaga and Lacoste posted the Jays’ final win of the meet, an 8-2 win at Line 1 doubles.

Jesuit returns to the courts on March 31 to face off with district rival Brother Martin. Match time is 4:00 at UNO.