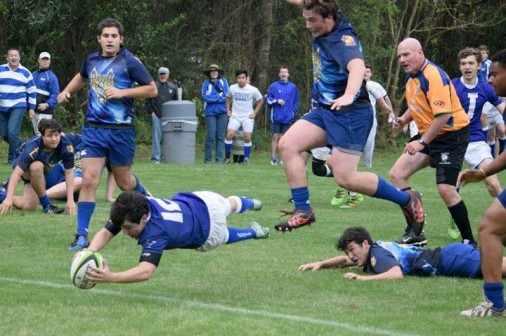 Neither two missing starters nor a sluggish start could stop the Blue Jay Rugby team from beating St. Paul’s, 19 -12, on the road Saturday, March 19. The misty, cold, and windy weather was a fitting backdrop for this tough battle between rivals.

Coming into the match, St. Paul’s was ranked 22nd nationally by the Goff Rugby Report, a website dedicated to covering high school and college rugby in America written by Alex Goff. (Goff is a noted rugby journalist and the first to create rankings for college and high school rugby programs.)

The Jays came out moving the ball down the pitch, but their sloppy ball handling and poor tackling would prove costly as St. Paul’s was able to grab a 7-0 lead early in the first half. Despite making a constant presence in Wolf territory, the Jays miscues cost them scoring opportunities.

Fueled by some strong, jarring tackles by Blue Jay defenders, the Jays began to shift the momentum in their favor. Late in the first half, the Jays took advantage of a St. Paul’s turnover. Junior Jacob Whitlow weaved through Wolf defenders to score a try. Senior Scott Derbes’s conversion kick tied the score at 7–7.

Jesuit continued to move the ball in the second half and scored again when junior Bryce Duffy pitched to junior Case Ellis, who broke through Wolf defenders and dove across the goal line. Another Derbes kick was good and the Jays held a 14-7 lead. St. Paul’s took advantage of Jesuit’s poor tackling to score a try of their own. The conversion kick was no good, but the 14-12 score was too close for comfort.

Jesuit closed out the scoring and the match with a bruising run by senior Will Waguespack. Waguespack took in a pitch deep in Wolf territory and plowed through defenders to score a try. The conversion was no good, but the Jays still walked away with a satisfying 19-12 victory.

The convincing win earned the Blue Jays coverage in the Goff Rugby Report.