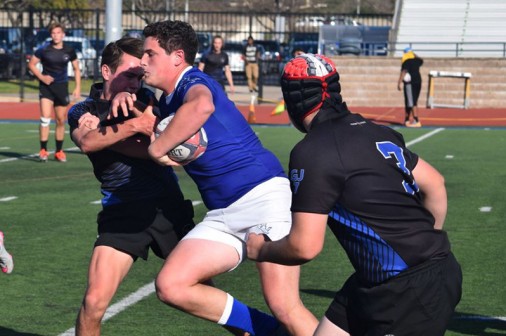 Senior Will Waguespack takes on tacklers on his way to scoring a crucial try in the match against the nationally-ranked Katy Barbarians.

The Jesuit Rugby Team and a large group of loyal fans traveled to Jesuit High School in Dallas to participate in the Jesuit Dallas Rugby Showdown on March 5-6. When they returned home, they brought with them the tournament’s championship trophy — “The Boot”.

The highlight of the weekend was the 12-11 victory over the nationally-ranked Katy Barbarians — a U19 elite select team from the Houston area. The Barbarians were undefeated this year, they did not lose a match last year, and they were only scored upon once last year.

The Barbarians used their size, speed and athleticism to take an 11-0 lead in the first half. The Blue Jays did not back down in the second half. By playing smart rugby and using great play anticipation, the Jays scored two trys (touchdowns) and one very clutch conversion (extra point) to score 12 unanswered second half points.

After a drive deep into Katy territory, sophomore Gabe Massey scored a try on a play restart when he took advantage of a lapse in the Katy defense. The conversion was no good, making the score 11-5, Katy. As the match was winding down, the Jays marched into Katy territory. Senior Will Waguespack used great anticipation on a critical line out with less than a minute to play. Senior Evan Slattery threw the ball in to senior Josh West, who tipped the ball. Waguespack snatched the ball from the waiting arms of a Katy player and raced 30 yards through Katy defenders for a try. Senior Scott Derbes then lined up for the two point conversion kick. Despite a tough angle, Derbes was able to get it through the uprights for the 12-11 win.

The Jays also played a match against the Jesuit Dallas Rangers that ended in a 5-5 tie. The Jays scored their try when sophomore Gabe Massey kicked the ball down field to gain field position. Junior Case Eilis raced downfield, split two Ranger players, and stole the ball on his way to a score. Precise tackling and strong defense by both teams would not allow further scoring in the match.

The Jays also won a match against Christian Brothers High of Memphis, 27-7. Junior Bryce Duffy scored twice on strong runs. Ellis and Derbes also scored on a long run and a stolen line out, respectively. Senior Benji Creel bulled his to a score as well.