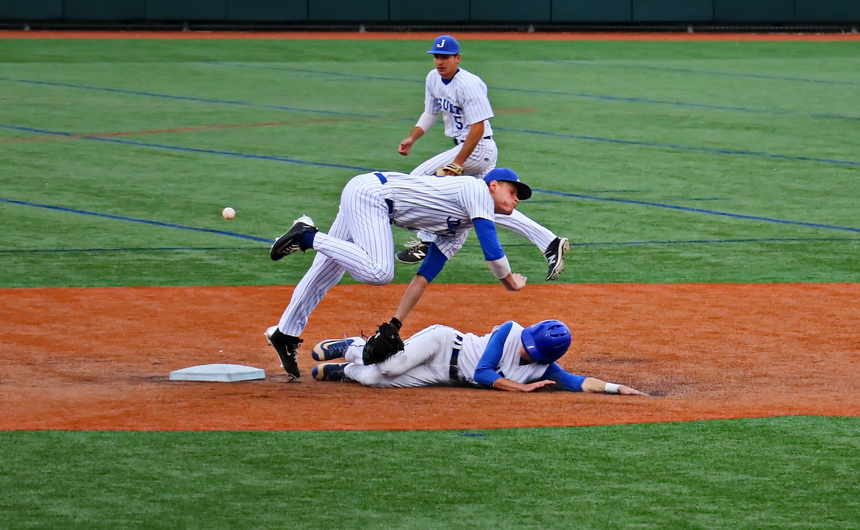 Shortstop Nick Ray goes up and over trying to tag a Tarpon runner stealing second base. The ball gets away from Ray but second baseman Brandon Briuglio is right there to back him up.

The Blue Jays won their home opener of the 2016 season Tuesday evening by routing the Golden Tarpons of South Lafourche, 13-3, at John Ryan Stadium.

The Jays spotted the Tarps two runs in the first inning but answered with one run in the bottom of the inning. The Tarps scored their third, and what proved to be their final run, in the top of the second inning. In the bottom of innings three and four, the Jays’ bats woke up and the boys in blue and white plated six runs in each frame. When the Tarpons couldn’t score in the top of the fifth, the game was called because of the 10-run rule. 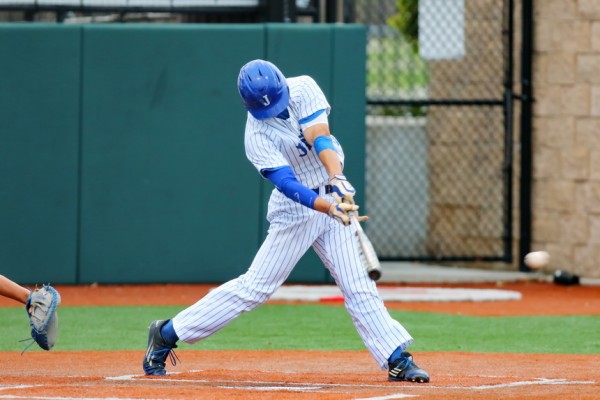 Stephen Sepcich had a terrific night at the plate with three hits, including a solo home run to lead off the bottom of the fourth inning. He also had three RBIs.

“I wasn’t real pleased the way we started the game, digging a 3-1 hole,” said Coach Joey Latino. “We have to be better than that coming out of the gates. But, once we started having better at bats, we did some good things offensively.”

Jesuit improves its record to 5-0 and, following a light practice on Wednesday, will host St. Thomas Catholic of Houston on Thursday, March 3 in the opening game of the fifth annual Jesuit Invitational at John Ryan Stadium. First pitch for Thursday’s game is 6:30 p.m.  The Jays will play Mandeville on Friday, March 4, at 4 p.m. On the final day of the tournament on Saturday, March 5, the Jays play two games, the first at 11 a.m. against St. Thomas, and the second against Hahnville at 6 p.m. The Jesuit – Hahnville game will be broadcast on WGSO 990AM as well as streamed live on WGSO’s website. Listen in as Blue Jay alumnus Danny Riehm ’00 calls the play-by-play action. Two other teams are also part of the JHS Invitational: Brother Martin and Archbishop Shaw. 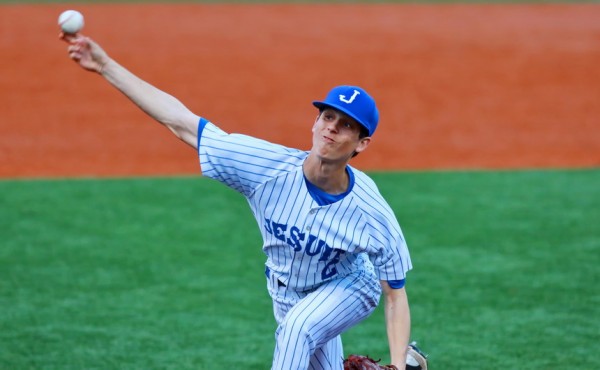 Senior right-hander Richard Oubre relieved starter Lee Blosser at the beginning of the third inning when the Jays were down, 3-1. He shut down the Tarps – no hits, no runs.

Against the Tarpons, the Jays trolled for 13 runs on 12 hits, including a solo home run by junior outfielder Stephen Sepcich, who blasted a pitch over the fence just left of dead center field (400 feet). Sepcich also had two singles and three RBIs.

Just about the entire starting lineup ended up on base one way or another. Third baseman Hayden Fuentes had a trio of hits, including a double and two singles, and one RBI. Shortstop Nick Ray singled and also had three RBIs. Second baseman Brandon Briuglio hit a double that scored two runs. Designated hitter Austin North singled, as did outfielder Mark Beebe, who had an RBI. Catcher Josh Schmidt and Marshall Lee, who played a couple of innings at first base, each knocked in an RBI double.

Sophomore southpaw Lee Blosser started on the mound for the Jays and pitched two full innings, giving up the Tarps’ three runs on four hits while striking out two and walking one batter. Senior Richard Oubre relieved Blosser at the top of the third inning. The right-hander shut down the Tarps in innings three, four, and five – no runs and no hits. He walked one batter and struck out three Tarps. Oubre took the win and improved his record to 2-0.

“Richard Oubre did a good job coming in down 3-1, not the easiest thing to do,” said Coach Latino. “But he threw strikes and let his defense work behind him. Then we had the two big innings back-to-back to put the game away. Stephen Sepcich had the home run, a couple of other big knocks in there, Hayden Fuentes hit a double. Brandon Briuglio drove in two runs. It just snowballed from there. The kids fed off each other and the momentum picked up.”

Coach Latino plans to use the Jesuit Invitational to “get the right nine on the field.”

“We’re still trying to feel our way and we’re still not there yet,” he said.